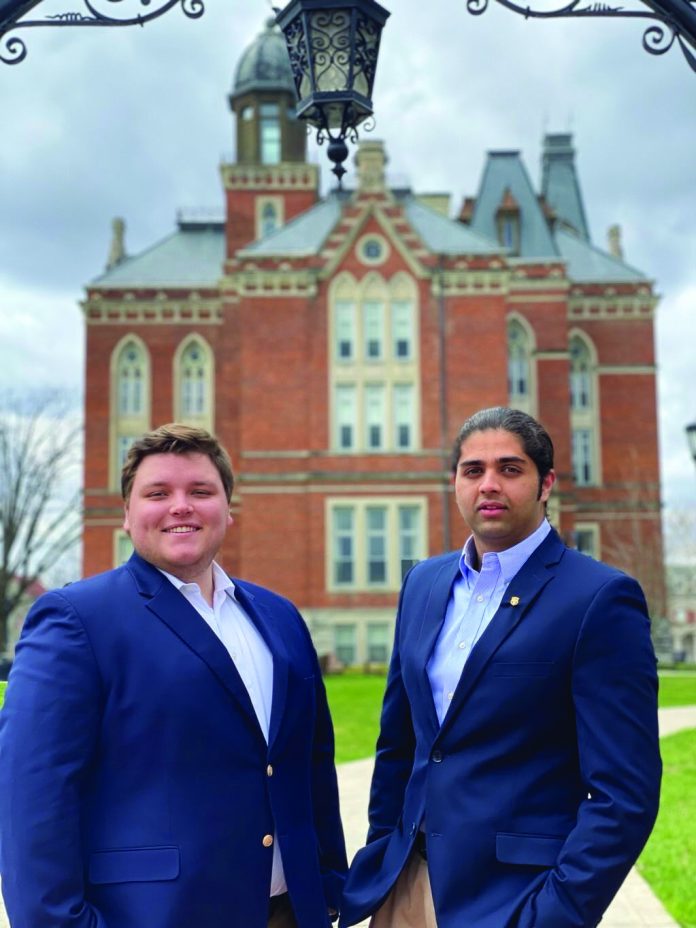 O’Keane said that the primary responsibilities of the DSG President include leading the executive board, setting the strategic initiatives for DSG, and serving as the main communicator for DSG and administration.

Jamil said that the Vice President serves as second in command to the President, and as an interface with the administration on a regular basis to address key issues that stand between Greek organizations alongside interacting with other VP’s and overseeing the Student Body Senate.

On top of  core responsibilities, some of their goals include communicating more effectively to the student body, beginning a DSG grant program, and addressing issues within Greek life.

“I would like to address the equitability on campus first and foremost and communication between the student government and the student body,” O’Keane said.

O’Keane said that plans to put this into action by establishing a more organized public relations board, as well as speaking with students and asking them how they want to see DSG communicating. He plans to have more direct communication through town hall events as well.

“It’s really about developing the public relations board and beginning to expand our presence through social media to start, and then planning more interactive events,” O’Keane said.

In order to promote diversity, equity, and inclusion, O’Keane and Jamil will work to bring back DePauw Dialogue.

“We’ll be doing effective work, and that comes from dialogue. Communication is the most effective medium to address issues,” Jamil said.

Jamil said that he will work to have a more diverse cabinet of powers, with many positions that are appointed and connected to one another, so that individuals from different backgrounds can serve as a conduit or representation for their concerned group.

“He (O’Keane)  comes from a white background, I come from a brown background, and it’s a good match of domestic and international dynamics. We ourselves are a reflection of diversity, and we ourselves corroborate our claim that we want to have a diverse campus,” Jamil said.

Alongside representation from a diversity standpoint, O’Keane said that he wants to work with the Women’s Center, Stevie Baker-Watson, and Dr. White to make sure that resources are available for sexual assault survivors on campus.

“We want to work with the Women’s Center to make sure that assault survivors do have the resources that they need, and that starts with having rape kits accessible on campus,” O’Keane said.

O’Keane said that he would also like to make sure that students have a safe place to go when incidents occur.

“It’s fundamentally an egregious crime to assault anyone irrespective of their gender, and I would like to make sure that we are reachable enough, and that people feel comfortable to that point that they are able to reach us and share the problems they’re having,” Jamil said.

O’Keane and Jamil are also focused on making DePauw more equitable for students regardless of financial status.

“We don’t believe that financial status should determine one’s experience here. Our goal is to work with the Sstudent Ssenate once it is conviended in the fall to get a pilot program up and going where students can apply for funds for educational expenses such as textbooks, technology, food security, and transportation,” O’Keane said.

Another issue that O’Keane and Jamil plan to address is the preservation of Greek life for all students, as well as promoting diversity within Greek chapters.

“As a brown student, there’s a strong perception on campus that being a part of a Greek organization is for white men and women. I think that is not the case, and I am a representation of that fact,” Jamil said.

He said that he would like to promote diversity within Greek life between international and domestic students.

“I think I can make (students) more comfortable to pursue the idea of extending legions to Greek organizations and overcome preconceived notions that are attached with Greek life,” Jamil said.

O’Keane said that they want to make sure Greek life continues for generations because it is a piece of history within the country.

“With the first Greek lettered women’s (fraternity) originating on this campus, we want to make sure (Greek life) secures its spot here. But, we also need to make sure that we address some of the issues that community members have raised around it,” O’Keane said.

He said that he will have a collaborative relationship with the leaders of Greek organizations to examine what needs to change and strategize how to move forward. He will also be working with the new Vice President of Student Affairs, the individual who will be replacing Alan Hill next academic year.

O’Keane and Jamil are ready to create impactful change on campus throughout their terms.

“We are honored to be selected by the student body, and I will personally be accessible all summer via email to respond to students,” O’Keane said.