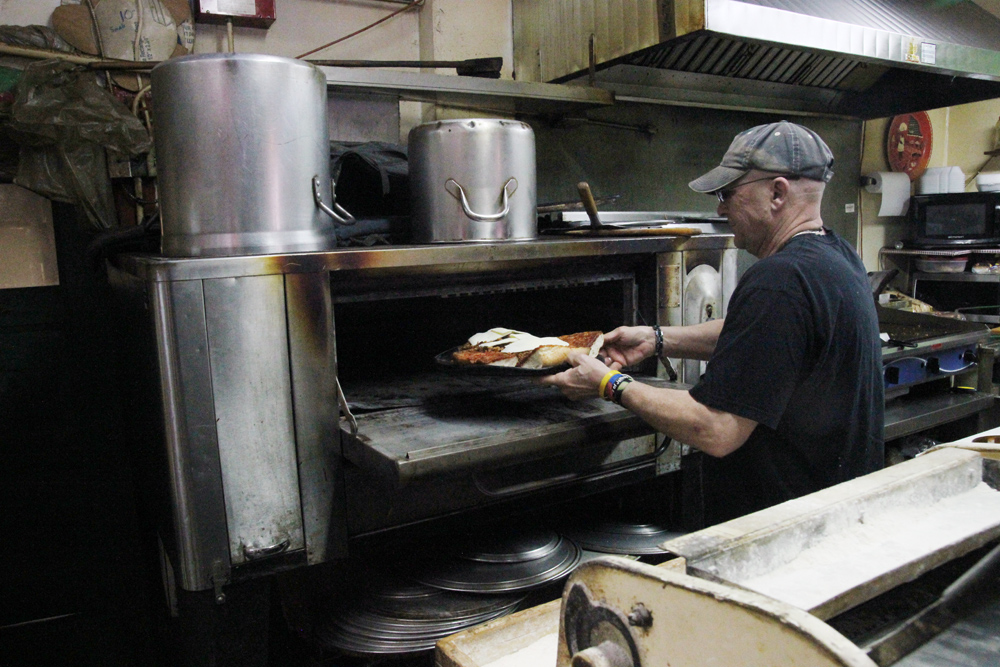 Nunzio Cancilla whips up an order in the kitchen of Mama Nunz.
The Italian restauraunt is named after Cancilla's mother Jo Ruth Cancilla.
SAM CARAVANA / THE DEPAUW

When thinking about the duties of the Department of Homeland Security, a stove isn’t what first comes to mind. But as local businessmen Nunzio and Patrick Shaw discovered when they began planning to move Mama Nunz, the department which is usually associated with preventing terrorism is also responsible for overseeing the safety of restaurant stoves.

Nunzio and Shaw are working on preparing a new location for local favorite Mama Nunz. The restaurant is making the change to be more accessible to one large sector of the Greencastle community: the DePauw students.

When students are asked what they miss most about home, a common answer is “a good home-cooked meal.” What many don’t realize is that a little slice of fresh-made comfort is available right here in Greencastle at Mama Nunz. Compared to many other restaurants, the vast majority of food at Mama Nunz is made fresh on-site from fresh ingredients.

The restaurant was founded in nearby Crawfordsville, but the owners moved the business to Greencastle in 1960. In its years in town, the restaurant has had many locations. Owner Nunzio’s favorite location for it was across from the post office because of its close proximity to both downtown businesses and the DePauw campus and the multitude of evening parking available. It was even located in the Union Building on campus from 1980 to 1982 before moving to its current location where the business has been for the past 32 years.

However, the area around their current location on Main Street has changed over the years. The road that the restaurant is on is not accessible from one direction of US 231. A park named after Nunzio’s daughter is the works for the area behind the current restaurant and that will cause the road that leads up to the restaurant to become a dead end. Many of the businesses that previously occupied the buildings around Mama Nunz have gone out of business, leaving Mama Nunz as the lone establishment in an area with little foot or car traffic.

Though the restaurant has many fans, Nunzio says that the number of students eating there has decreased this year. He hopes that the new location will entice more students to visit.

“We’ll be just two blocks from campus, and it’s in a great location,” says Nunzio.

The owners see the move as a chance to renovate and improve. The new location will have an updated look compared to the current one, but will still have the signature feel of Mama Nunz.

“We’re bringing the gifts from fraternities and the sports memorabilia, don’t worry,” says Mama Nunz, owner and namesake of the restaurant.

In its new location, Mama Nunz will have a dining area as well as a bar for patrons of legal drinking age.

“I really like the feel and the overall environment.  It was a lot of fun, and the food is freaking amazing,” said sophomore Monica Valadez. “The one time I went I had to take my car, I haven’t been back since my freshman year because it’s just too far away.”

Getting the design just right has taken careful planning on the part of Nunzio, Mama Nunz and Shaw. They have filled out forms, scheduled meetings and had discussions with people from the city government and, yes, the Department of Homeland Security.

The new location will be on North Jackson Street across from Completely Nuts and Candies. The owners hope to be up and running there by graduation in May.