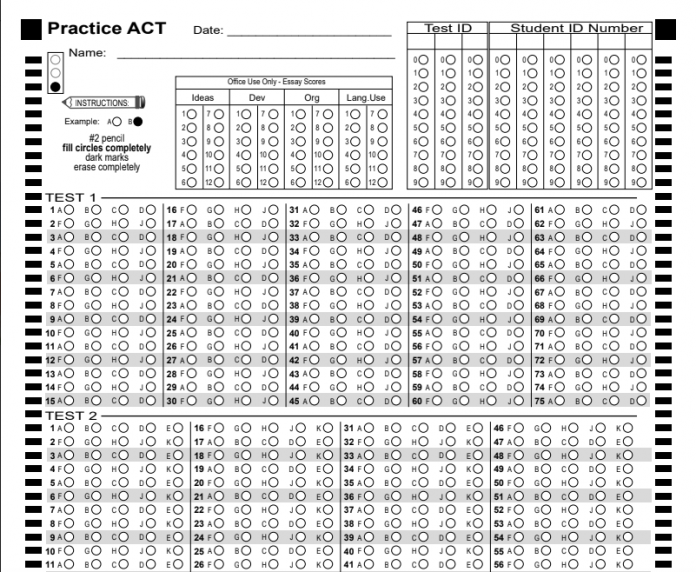 By Ian Brundige and Rachel Roscoe

When Anna Werkowski, senior, was applying to colleges the thing that worried her most were standardized tests. “When I was in high school getting ready for standardized tests, I was really afraid because I don't test well,” Werkowski said. “I get really anxious during testing scenarios.”

Because of her anxieties, Werkowski retook both the SAT and ACT a combined five times, which she had to pay for each time. “I had the privilege to take the test multiple times; not a lot of people do,” Werkowski said. “I think that that is essentially a big part of why we shouldn't have exams because you can game the system so many different ways.”

Last week DePauw University announced that next year applicants will not be required to submit SAT or ACT standardized test scores.

“Really the benefit for that is access and inclusion,”  said Amanda Ryan, director of admissions. “And with DePauw’s mission, part of the mission, being diversity and inclusion… [testing] seems, counterproductive to what the mission is.”

The decision was made after about a year and a half of research and discussion with the Vice President of Enrollment Robert Andrews, and both the Faculty Curriculum Committee and Faculty Admissions Committee. The research found that testing is not always the best way to assess if a student will succeed in college and that bias goes into the tests, according to Ryan.

Ryan expects an increase in applications due to the change.

The Faculty Admissions Committee unanimously passed the change at a meeting last Thursday.

Other students had similar reactions to Werkowski. “I think that making ACT and SAT scores optional is a great idea because a lot of students don't do well under pressure of tests,” Elyse Haskell, junior, said. “And I don't think the ACT or SAT reflects someone's intelligence well.”

However, some still think a clear standardized measure is necessary. “I think character and extracurriculars show more about a person than just a test score, but at the same I think that a benchmark is needed for just general, you know, knowledge to understand where someone is and how they get further learning from that,” first-year Whitaker Lyons said. “So I think that it should still be required, but I don't think it should be the only thing that someone is judged on.”

According to a DePauw University press release, home-schooled students and international applicants will still be required to supply a test score due to their “highly individualized transcripts” and to “assist with verification of credentials,” respectively.  Further details about future application requirements are forthcoming.