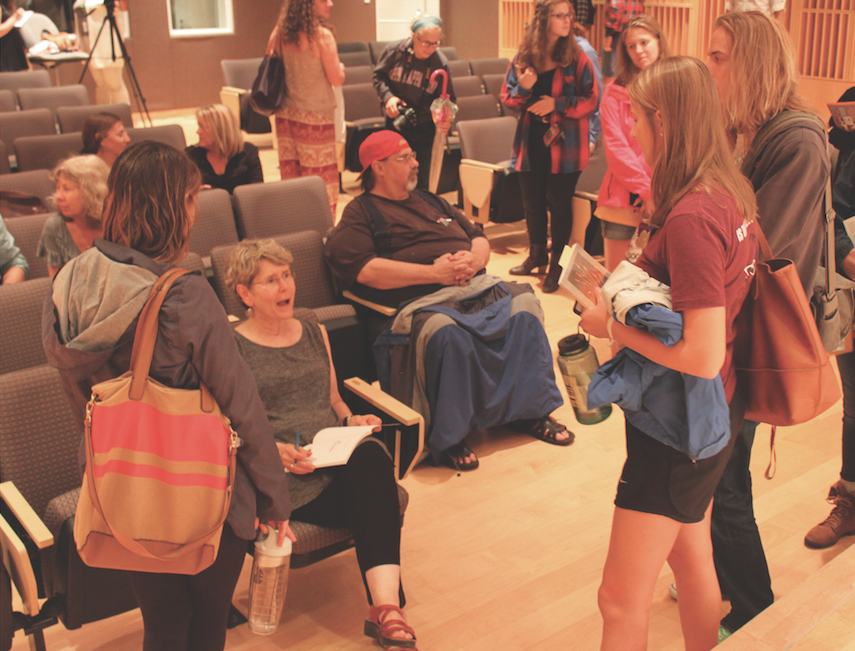 Poet Nathalie Anderson talks to a group of students
ater her reading on Sept. 11.
LEAH WILLIAMS / THE DEPAUW

Poet Nathalie Anderson took the stage in front of a packed auditorium to read some of her most acclaimed poems to DePauw students and faculty.

Anderson boasts numerous awards, including the 1998 Washington Prize for her first book “Following Fred Astaire” and the 2005 McGovern Prize for her second book “Crawlers.” Not only sharing these award winning works of literature but her personal stories as well, Anderson easily kept audiences captivated from the moment she opened her mouth.

Starting with a work from her book “Following Fred Astaire,” Anderson opened up with a poem titled “Verizon.” After the reading of this poem, Anderson spent some time talking about her writing style and why she writes.

“I don’t write nice” she said. “I take things that happen to me and twist them until they are almost unrecognizable, but still in a sense about what I have felt.”

After reading a few more poems, Anderson took a very different approach and opened up to the audience about her mother and how little she knew her mother.

“My mother died when I was three, some people have memories from this time of their lives, but I do not,” she said as the smile slipped away from her face. “It was my greatest lost.”

“It was very mind boggling how real she was with us,” first-year Diamond McDonald said. “She had these abstract poems that we had to figure out and relate to ourselves.”

In going through her mother’s things Anderson, came across an old college poetry textbook. Within it she found pressed flowers and little doodles that gave her a sense of knowing her mom.

Following her story about her mother, Anderson turned on the screen and started to show a photo album. In the background, a poem that she wrote about her mom and the shadow of a man that loved her played. As a wide-eyed audience watched on, the people in the seats learned more about Anderson’s mom and her efforts to learn about her. After the poem stopped, Anderson talked about her efforts to find the man that had taken these photos, the man known by his shadow. Unfortunately, she was unable to locate the man or any information about him. It is possible that he died after serving in World War Two.

“It’s hard not being able to figure out such an important part of your mother’s life,” Anderson said. “I even looked through lists of those who died during the war and couldn’t find his name.”

Anderson finished off the night with a final poem entitled “Shrine.” After the reading, she was greeted with a round of healthy applause from the audience, who were still enthralled in her readings. Anderson spent some time signing books and just speaking with students.

“It’s really great to hear from the author,” senior Jason Grullon said. “You get it straight from the source.”

“I really enjoyed this whole experience. It was very open and honest,” Kaufmann said. “Hearing from the person that wrote it was a very enlightening experience.”