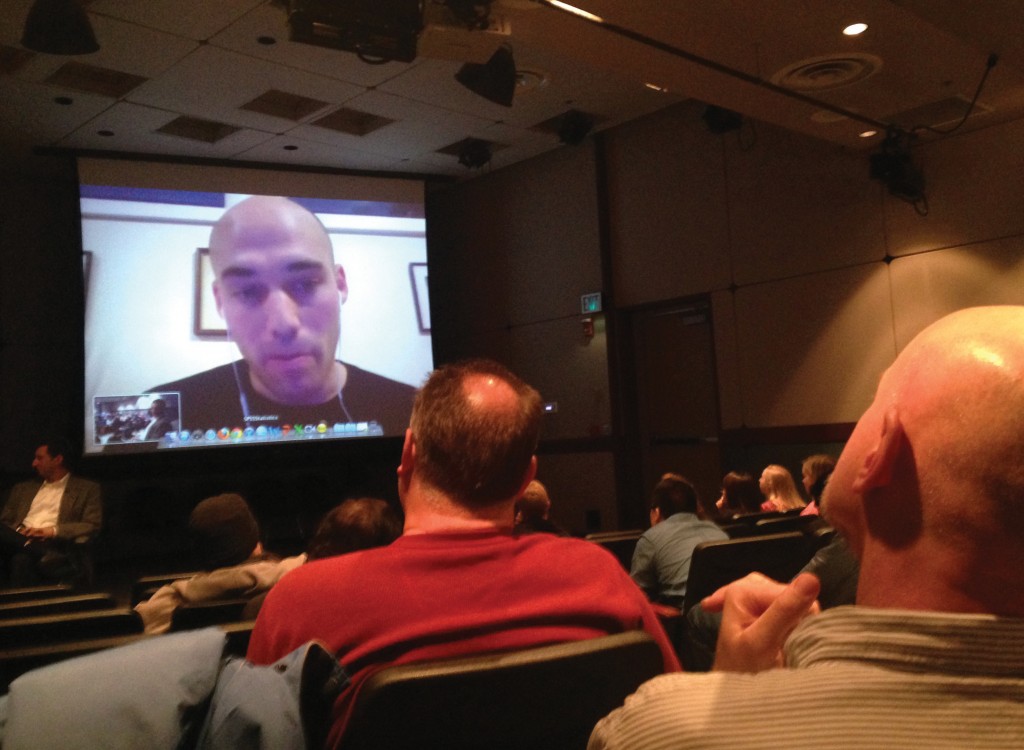 Surrounded by rogue Indonesian gangsters knows as the Pancasila Youth, documentary filmmaker Joshua Oppenheimer recorded what it would have been like to be a communist in Indonesia in 1965.

More than 500,000 people were killed in Indonesia between 1955 and 1956, but these events were often skipped over in Indonesian history books and weren’t widely known nationally until Oppenheimer decided to make a difference.

His documentary, “The Act of Killing,” was shown at Ashley Square Cinema on Tuesday night and follows several early leaders of Pancasila Youth. Oppenheimer followed them around and discovered the ways in which the gang still harasses the children of the people they killed, as well as reenactments of the killings themselves.

The film was both haunting and yet human at the same time, giving off an extremely eerie vibe to the audience. Many of the scenes were brutal and it made you wonder how one second this man could be doing the cha-cha, and the next strangling someone with a wire.

DePauw students had an opportunity to discuss these events with Oppenheimer himself on Wednesday night via Facetime session with the director, facilitated by professor Seth Friedman.

One of the main questions brought to Oppenheimer’s attention was whether or not he was afraid while making the film.

“I was rarely physically afraid,” said Oppenheimer, “but emotionally afraid.” He did say he had nightmares at night and had a feeling and sleeplessness that went on for eight months.

His willingness to endure all of these emotions is why Oppenheimer is thought to be one of the greatest documentary filmmakers of our generation. He views the subjects of his documentarries as an indication of his distinctness.

“I’m really tired of documentary films where we present the main subject as a hero or a role model,” said Oppenheimer. “It let's the audience off the hook and is totally dishonest for how the world truly is.”

He doesn't want to make films about people he admires or idolizes.

He believes movies shouldn’t be a place where we go to escape but rather to have some kind of emotional journey or experience.

Though the film is extremely heartbreaking, there are times when we almost forget what these people once did.

“We laugh at tender moments, but they are moments that we laugh because the characters are open and show honestly who they are,” said Oppenheimer. “We find it not just funny, but loveable. They provide a certain amount of relief but ultimately make it more painful. I think it works in two ways first of all we open ourselves to these men before they do something terrible and it makes it seem that they are still human beings which makes it all the more frightening.”

Oppenheimer acknowledged the fact that, if he grew up in a war family, then he wouldn't know if he would do the things these people did in 1965, but he finds himself extremely lucky to have never had to find out.

“The hopeful truth,” said Oppenheimer, “is that because they are human at some level, there is hopefully a deeper human side that rejects evil. I think the film has a terrible and yet human message.”

Oppenheimer said he prefers working with nonfiction films because, though they may not be as suspenseful as fiction, the stakes are much higher because all of the events are true and unfolding before even the filmmaker’s very eyes.

“People are putting themselves and their lives on the line,” said Oppenheimer, “and that's real for them.”

He defines a documentary as people playing themselves, but he is always very careful not to harm people.

Since its release, Oppenheimer said he never could have dreamed how big the film would get. Originally it was shown privately in Indonesia, but has since exploded on the Internet and now is being shown publicly throughout the country and around the world.

The events that took place in 1965 Indonesia were horrifying, and people all over the world are starting to realize it thanks to Oppenheimer. He warned the audience to always remember, “Every act of evil in our history was committed by men like us.”