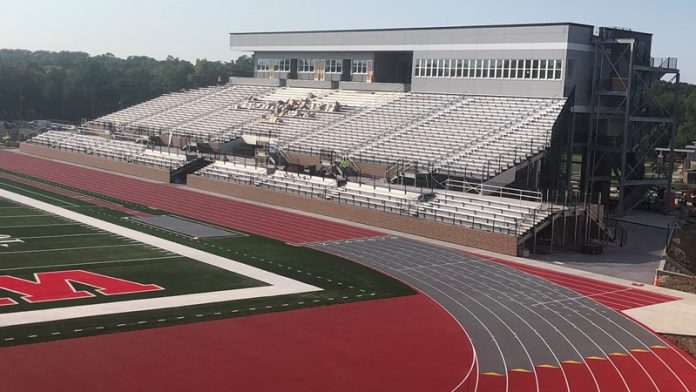 After winning the Conference Championship at home last Saturday, the DePauw football team celebrated another victory with “Ballad of the Bell” ringing out from Blackstock Stadium. With the championship behind them, all attention turned to Wabash and the Monon Bell Classic, according to head football coach Brett Dietz.

“When you finally achieve the goal, there's some satisfaction there,” Dietz said. “But it’s really short lived.”

This year, Monon will be at Wabash’s new Little Giant Stadium.

The new stadium cost $13 million and seats 3,550 fans in the home stands including an indoor lounge with box seats, called the W Club Lounge. It is unclear how large the away section is. The DePauw contacted Wabash Athletics, but was unable to conduct an interview due to scheduling conflicts.

Wabash football has played four games in their new stadium, with an even record of 2-2.

“I know some of our guys wanted to be the one to give them their first loss in their new stadium,” Dietz said.

Meanwhile, DePauw has been undefeated at Blackstock Stadium this season. Blackstock was dedicated in Oct. 1941, meaning this is the 80th anniversary of the stadium which cost $80,000 at the time. It seats about 4,000 guests, with locker rooms and a press box.

While Dietz has not yet seen Wabash’s new stadium, regardless of the upgrades, the plan is for the team to play the same, according to Dietz.

“It doesn’t matter to us,” Dietz said. “The field is the field. We could play at Lucas Oil, we could play here. The game is still going to be the game.”