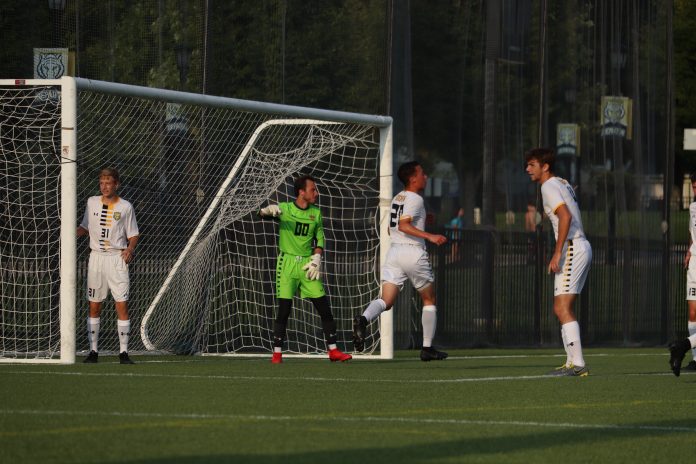 The Tigers remains undefeated at home after a 2-1 double-overtime victory against Rose Hulman Fightin’ Engineers on Wednesday, Sept. 18.

Both teams played aggressively right from the kick-off, making tackles and fouls. DePauw had the first chance to score with a low cross from the left in the 12th minute, but a shot from first-year Quinn Flashpohler was blocked.

After substitutions from both sides, the midfield battle did not cool off. The two teams were involved in back and forth attacks, but no goals were scored.

Going into the second half, the score was 0-0. The Fightin’ Engineers had a better start in the second half with high-tempo play style. In the 54th minute, Rose-Hulman struck the ball to the crossbar of the Tigers. The follow-up shot was blocked by junior goalkeeper Dylan Ruzbasan.

While under pressure, the Tigers  used long balls to run counter attacks. In the 60th minute, senior captain Jay Klein stepped up to a free kick and curved the ball to the penalty box. Junior Grady Bruch broke the deadlock with a header to the right corner for the Tigers.

One minute later, the Fightin’ Engineers had the equalizer. Andy June received the ball in an open spot and put it into the bottom left corner.

The team did not lose their spirit after being tied.

“The goal didn’t affect our attitude at all.” senior Nicholas Carlson said. “We knew we were in control and just needed to be a bit sharper.”

The Tigers had the ball most of the second half, despite the Fightin’ Engineers scoring. Their attacks focused on the left wing with Klein and junior Carlos Martinez. They had a few chances, but could not find the net. The score was 1-1 after 90 minutes.

The two teams played overtime with similar tactics. They both moved down their defensive line and focused on blocking attacks from the opponents.

Towards the end of the game, Klein was fouled and a penalty was given to the hosts. He put the ball on the spot and smashed it to the left corner. The Tigers won 2-1 due to golden goal rule (the first team to score in overtime is the winner).

The star of the game was Klein. He had an assist and a goal in the last minutes.

“I just tried my best to stay calm cool and collected on the penalty kick,” Klein said. “I knew if I put a hard shot low in the corner, I would have the best chance of scoring.”

Coach Brad Hauter believed the team had a strong performance.

“We know how they will play and they are very disciplined in their style,” said Hauter. “You have to rely on the players having a high soccer IQ and being able to solve problems in the moment, which we did.”

The next game for the Tigers is at home against Oberlin on Sept. 28 at 5 p.m. Stay tuned for more action from our team.