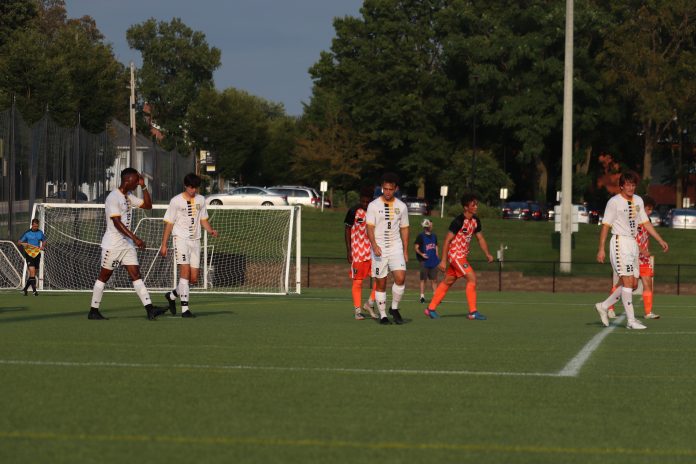 The Tigers had their third win in a row in soccer after beating the Franklin Grizzlies 6-0 on Tuesday, Sept.10.

The team’s offense made a difference from the beginning. Senior Sam Kramer put the visitors in front with the opening goal three minutes into the game with his first goal of the season.

After a favorable start, the Tigers continued to create chances with crosses and long shots. In the 13th minute, first-year Quinn Flaspohler scored the second goal after receiving a pass from junior Carlos Martinez.

Following substitutions, the team took a slower approach. The Grizzlies tried to press from different angles, but they could not gain possession of the ball. TheTigers’ midfielders came out of the press and broke down Grizzlies’ attacks from the center line.

The team showed their dominance in the rest minutes of the first half, putting on a total of nine shots. Junior Jake Limauro scored the third goal two minutes before half-time. Flaspohler kept making plays with an assist.

In the second half, the Tigers constantly put pressure on the Grizzlies' defense with both short and long shots. Keeper Jake Hendricks had nine saves, but it was not enough to stop the visitors from scoring.

In the 49th minute, Flaspohler had his second goal with a powerful shot. Just four minutes later, Kramer put the ball into the Grizzlies’s net for the fourth time.

With a big lead, the Tigers did not lose their focus. The team’s defense only allowed one shot on goal.

Besides efficiently preventing opponent’s attacks, Tigers defenders also made highlights with offensive plays. The team closed the game with a goal from sophomore Matt Luing. The final score was 6-0.

Flaspohler made the spotlight with two goals and two assists, proving his role on the team’s offense. “Quinn has been a fantastic boost offensively for us and continues to produce goals and assists,” said captain and senior Jay Klein.

Kramer also had a good game while scoring two goals. His early goal was a decisive factor to get a blowout. “The early goal really helped set the pace for the rest of the game,” said Kramer. “We had to come out and put them under pressure fast or they could have capitalized.”

In the team’s 3-game winning streak, keeper and junior Dylan Ruzbasan did not concede a goal.

Senior Jay Klein said, “the team’s defense is looking good, but they should keep their feet on the ground to have the best result.”

The Tigers are in good spirit after terrific performances. Coach Brad Hauter said, “They started the trip home to Greencastle singing on the bus which is always a good thing to hear.”

The team’s next match is at Manchester on Saturday, Sept. 14 at 12:00 p.m. Stay tuned for more updates on our team.