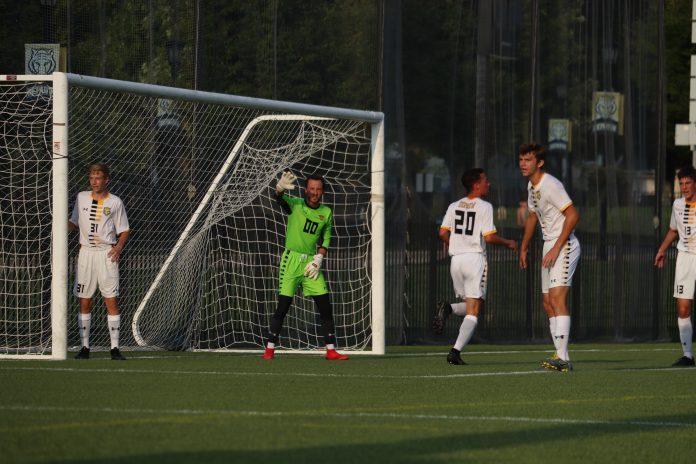 The Tigers had their first tie of the season at home after a 0-0 game against Wabash College’s Little Giants.

Wabash pushed forward and tried to set the pace in the beginning of the game. The first chance of a goal for the visitors came when Cesar Martinez took a low shot, but he could not find the net. DePauw struck back a minute later with an over-crossbar shot from senior Sam Kramer.

The Tigers were not lost under pressure from Wabash. They found connections on both ends as the game went on. Junior Jack Herbst led the defense efficiently with timely challenges, keeping the ball off target.

From the 15-minute mark, the game turned in favor of the hosts. They managed to slow down and had the upper hand in the possession game. “We have seen them play many times and knew their pressure was coming and also knew they could not sustain it,” coach Brad Hauter said. “I thought once we grabbed the ball we took that away from them.”

Towards the end of the first half, the Tigers increased pressure with many shots, but they lacked the accuracy to turn those shots into a goal. The deadlock remained after the first 45 minutes.

Unlike the first half, DePauw headed into the second half aggressively. They quickly transitioned from defense to offense, posing threats to Wabash’s net. The Little Giants’ defenders had to make fouls to stop the attacks. The Tigers had many free kicks close to the box, but they could not score.

While hardly controlling the ball in the second half, Wabash made highlights from counter attacks. They delivered long balls for the strikers and used one-touch passes to get through DePauw’s backline. However, senior Dylan Ruzbasan did a good job, having at least three key saves to keep the Tigers in the game.

By the end of the game, no goals had been scored leading in to overtime. They both played the same style as they did in the second half, but none managed to take the lead. The game ended 0-0 after double overtime.

Despite the tie, DePauw had a better game overall as they outplayed Wabash. They had strong stats in shots, corners and ball-possession time. “We dominated for the majority of the game so we felt unlucky not to score,” senior Nicholas Carlson shared in a post-game interview. “Our midfield got a little disconnected at times and that’s when they were allowed to bring the ball at us more than we would like.”

This was the last home game in the regular season for the Tigers. “This game was very special,” senior captain Jay Klein said. “It was potentially the last game at home in front of our fans against our rival Wabash. It doesn’t get much better than that.”

After this draw, the fight for the final spot in the playoffs will be  a battle between DePauw and Oberlin College. The Tigers currently stay ahead with 13 points, compared to Oberlin’s 12 on the NCAC standings. “I think our chances are very good,” Hauter said. “We have worked hard to be in this position and are comfortable with the challenge before us.”

The Tigers will play their final game of the regular season at Kenyon college on Nov. 2 at 3 p.m.