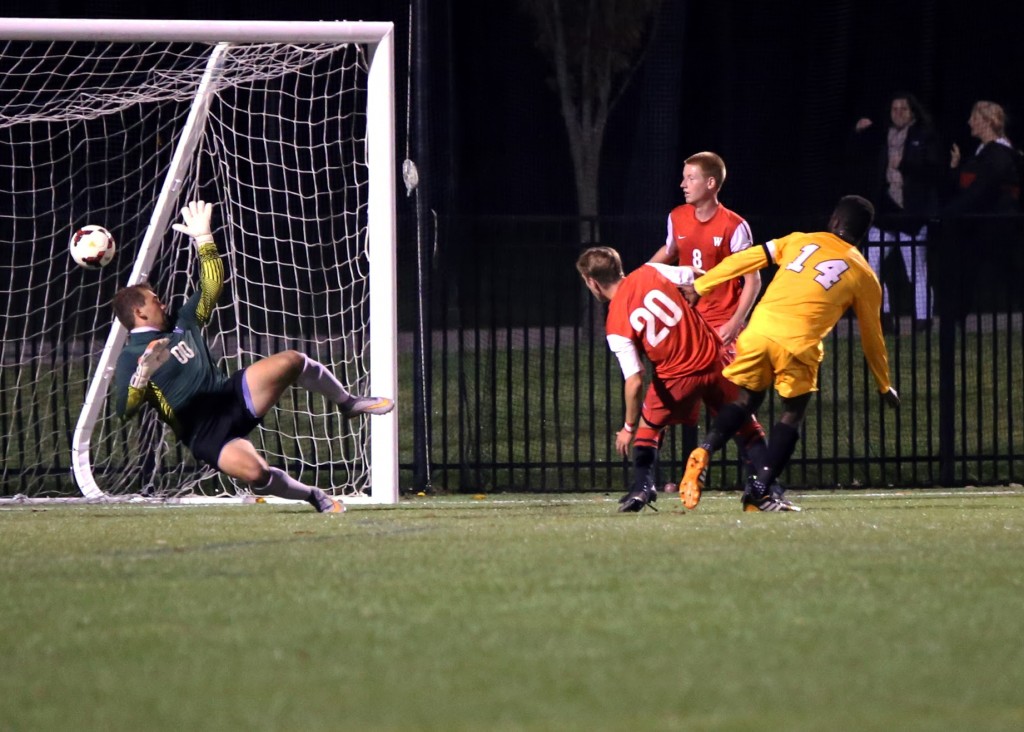 Scoring the first goal of the game, DePauw midfielder Alieu Musa (14) kicks the ball into the net past Wabash goalie Dayton Jennings on Wednesday, Oct. 28, 2015 in Greencastle, Ind. REBECA BAGDOCIMO / THE DEPAUW

The Tigers 3-1 defeat over the Little Giants (11-4-2) on Wednesday evening secured them a place in the North Coast Athletic Conference tournament.

Students lined the sideline opposite the team benches, clad in yellow and red, cheering loudly in support of their respective schools, the rivalry palpable.

“We always love playing Wabash because it is much more than a game to us,” junior forward Julian Gonzalez said.

The first goal of the game came from senior midfielder Alieu Musa off an assist from Gonzalez at the midpoint of the first half.

Minutes later sophomore forward Taras Tataryn scored his first goal of the season off a corner kick, sending the Tigers went into the half up 2-0.

“As a team, we really wanted to focus on the first 30 minutes of the game and come out strong which I thought we did,” senior goalie Chris Yount said. “We only had mental lapses that lead to a goal in the second half but we responded well and dominated most of the game.”

Wabash senior Adam Antalis scored the team’s first and only point early in the second half of play, bringing the score to 2-1.

But senior midfielder Mitch Reavis secured the team’s victory with his goal in the 67th minute.

The goal came off a pass from senior midfielder Adrian Ables, which put Reavis 1-on-1 with the Little Giant goalkeeper, bringing the Tigers to their 3-1 final.

“This win was huge for us,” head coach Brad Hauter said.

The win came after a tough loss and two ties improving the team’s record to 10-4-2.

“[This win against Wabash] gets us into post season and gives us some momentum as we look to make a run,” Hauter said.

Although the team came together and put forward a strong showing against Wabash, there is always room for improvement.

“The one thing we are working on for the rest of the season is being consistent,” said Gonzalez. “We have game were we play extremely well and games where we play at the other team’s level.

“I think we just need clean up the little things,” he said. “We haven't put together a full 90 minutes of soccer this year so it would be great to do that against Allegheny and carry that momentum into post season play.”

Their regular season comes to a close on Saturday as the Tigers take on the Gators at 1 p.m. at Allegheny in Pennsylvania.