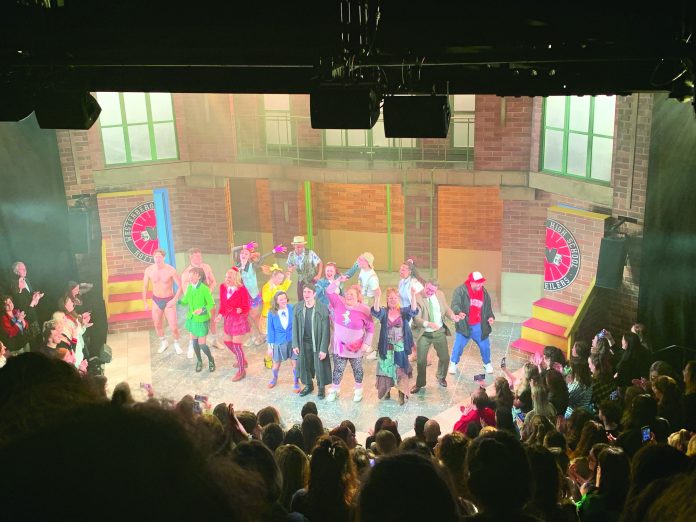 High school is one of the many transitional stages for any student as they adjust to a new workload, join clubs and organizations, try to make it on time to class, and most importantly, plot to murder their classmates. Well, at least, this goes for Westerberg High School. On March 13, 2022, I had the opportunity to experience the iconic “Heathers: The Musical” in person at the Other Palace Theater in London.

For those of you who do not know, the film “Heathers” was first released in movie theaters in 1989. The plot follows Veronica Sawyer who becomes part of Westerberg High School’s popular clique, the Heathers, though disapproves of the girls’ cruel behavior to the student body. The story further thickens after Veronica and her boyfriend, James Dean, also known as J.D, murder the clique’s leader Heather Chandler. Soon, Veronica realizes J.D. is intentionally killing students he does not care for, and Veronica must race to stop J.D’s killing spree while clashing with the clique’s new leader, Heather Duke. The film is now a cult classic in the United States and has been adapted for theatre stages all over the world.

As a person who has never experienced the Broadway version of “Heathers: The Musical,” the West End adaptation was truly a treat to experience. The effective use of lighting and sound effects added to the musical’s overall lure and only amplified the actors’ and actresses’ striking performances.

In the true nature of “Heathers,” this crude commentary from both the film and Broadway musical was translated in this adaptation of “Heathers” with the use of notable references such as “Veronica, why are you pulling my d*ck?” and “F*ck me gently with a chainsaw. Do I look like Mother Theresa?”

The soundtrack of West End’s “Heathers” adapted from the original Broadway “Heathers” soundtrack with two new additions of West End’s own, “Never Shut Up Again” and “I Say No.” The notable favorites such as “Candy Store,” “Big Fun,” and “Meant to Be Yours” were surreal to see and hear in person, as my first experience with these tracks was through Tik Tok trends from 2020 to 2021.

One addition that made the West End’s adaptation stand out from Broadway was specifically “Never Shut Up Again.” This track was one of my favorite additions to the original adaption of the musical and provided the transition missing from its Broadway predecessor into Heather Duke’s reign over Westerberg High School after Heather Chandler’s death.

Experiencing this musical from the aesthetics on stage and its distinct soundtrack, it is a must-see the next time it hits Broadway in the States!