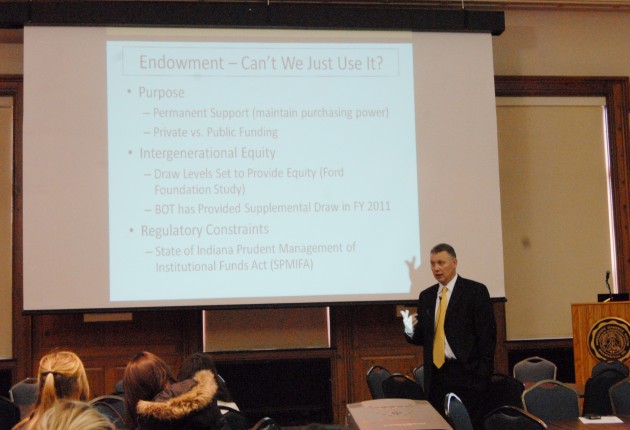 Any time tuition increases on a college campus, students and their parents want to know why. In years past, DePauw has relied on sending e-mails to the student body to report increases in tuition.

But a white paper (a written-out request to the university) passed Dec. 12, 2010 by the DePauw Student Government asked Vice President of Finance and Administration Brad Kelsheimer, to hold an open meeting in which students could ask questions in regards to future tuition and budget decisions in the hope of increasing communication with the university.

The official "White Paper Concerning Communication of Tuition Increases" read, "it would be most helpful if all students had the opportunity to learn how their education is funded and what role the proposed tuition increase plays in the development of the university budget."

Two financial aid question and answer sessions were held Wednesday — one lunch session at the Union Building Ballroom and one evening session in Watson Forum. Attendance at both sessions was relatively low, but no one was disappointed in the numbers.

"I think the overriding reaction was the questions were really great," Kelsheimer said. "[The students] were knowledgeable and had a real engaging interest."

"I thought it was interesting to see the kind of things we're planning to do and where that money is coming from," said junior Lisa Becharas.

During the two sessions, Kelsheimer addressed issues such as tuition of the future, distribution of budget, endowment and DePauw in comparison to other schools financially.

"The model is to take the resources we have and make the most out of it," Kelsheimer said. "It's a greater good prophet. It's a lot easier to come up with ideas [for DePauw] than to say no, but that what's the budget has to do."

The idea is for the session to become an annual event. Walker expressed her interest in expanding these kinds of open forums for student and faculty issues or to other aspects of DePauw.

"Last year when me and David [Dietz, student government vice president] were making a list of priorities for our campaign, the majority of issues were between faculty and students and administration and students," Walker said. "It is really about information and accountability."

The university is in the process of creating a website to present this kind of information to students and other interested parties. Also, the PowerPoint presentation used by Kelsheimer at the sessions is currently being transferred to the student government page on the DePauw University website.

"When Dr. Casey came here two and half years ago, one of the principles he stressed was transparency," Kelsheimer said. "Growth can only come with transparency."