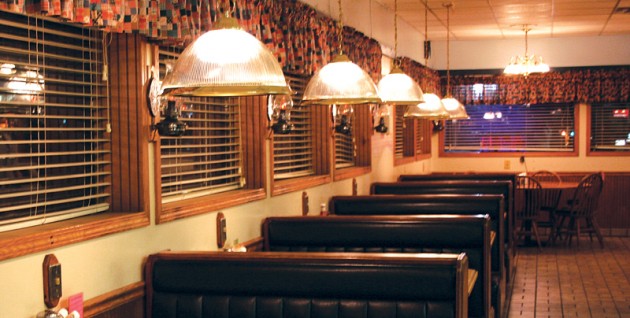 In 40 years, it has burned down, been re-built and changed owners at least three times.

But it has always been open 24 hours, the staff on a first-name basis with their customers and patrons free to have a cigarette with their meal. It's the reliability that keeps them coming back.

The Cloverdale Travel Plaza sits atop a hill in its namesake town, nestled in the junction of US- 231 and Indiana I-70 just off Exit 41.

Aside from a convenient re-fueling spot, the plaza has everything its weary travelers might want but never find at an average gas station – fishing bait, showers, a barber shop, arcade games, laundry machines and even a dispatch center for commercial drivers, Joy's Dispatch.

There's also "Restaurant," the only 24-hour eatery in a 20-mile radius. Although already aptly named, it is referred to by its regulars simply as "the truck stop."

Lori Belcher said that growing up in Cloverdale, she wasn't allowed to go to the truck stop, even for gas, because of its seedy reputation.

"Every truck stop's got a bad rap," says waitress Diana Neace. "That's just the way it is."

Lori now manages the plaza's restaurant and hopes to see it become as much a family's diner as a truckers' sanctuary.

"I don't want it to be anything fancy," she says, "I just want everyone to feel welcome."

In addition to providing weary travelers solace from the open road, it occasionally welcomes students as well.

Belcher said that many athletic teams from out of town stop by for breakfast before heading home after weekend matches with DePauw, and DePauw students occasionally drop by as well.

Senior Leila Patterson is one such student, who likes that the truck stop is just far enough away from campus to feel like another place entirely.

"I feel like I'm able to get off campus and away from the DePauw atmosphere," she says. "It's my favorite little space that I feel like no one else knows about."

While the truck stop offers her a safe-haven from the hustle and bustle of campus, she says she also likes the opportunity to eat some of her favorite foods that she can't find on campus, like pork chops and hash browns.

"When you really want a traditional southern breakfast, I would go to the truck stop," she says smiling.

The combination of late-night television talk shows, chattering customers and silent work sustains a lull in the restaurant, occasionally broken by a belly laugh or a newcomer's greeting.

"My food's good, don't get me wrong. We've got the best coffee in town," Lori says. "But a lot of people come here for the company. Everybody knows each other, so everybody stays."

For her, customer service can mean anything from smiling and keeping clean kitchen to driving upwards of 20 minutes to make sure no one misses breakfast.

"He couldn't drive, but he enjoyed coming and having a cup of coffee and biscuits and gravy," Lori says, referring to a regular who recently passed away, "so I'd pick him up on the way in and take him home when I left."

"They're not just customers," she says. "It's like a big family."

Mark Gross, a truck-stop fixture since the late 70s, sits sipping coffee as he watches television with Ralph Smith. Their seats at the bar are practically assigned to them.

While Mark's relationship with the truck stop started out of necessity, being the only diner open after he got off work, it continues out of loyalty. Even if every other restaurant suddenly opened 24 hours, he'd never be a regular anywhere else.

Ralph started coming to the truck stop in the early 70s, usually when bad weather thwarted hunting or fishing trips. Now that he's retired, he visits the truck stop much more frequently – six days a week by his estimation.

After years of independent research, he says confidently that his favorite thing on the menu is the breaded tenderloin sandwich, usually with a slice of cherry pie.

Diana, a seven-month strong waitress and regular in her own right, refills coffee cups — regular for Mark, decaf for Ralph.

"I've been told I'm the nice one," she says smiling. "But I put them in their place when they need it." The smile turns into a grin.

Mark and Ralph laugh, but the response comes as no surprise to Lori.

"I hire feisty waitresses for a reason," she says matter-of-factly. "[The regulars] can be pretty feisty themselves."

Spunky as they can be, Mark says regulars know to respect the waitresses and are quick to step in if anyone pushes it too far.

"They back the girls up," Lori says, gesturing to Mark and Ralph, but referring to many more.

Whether they are Cloverdale natives visiting multiple times a day, or long-haul drivers that come once a year, most visitors feel like regulars.

"We call them by name and when they leave, they call us by name," she says. "It's very rewarding."

Lori clocks out shortly before midnight, but much like her customers, she finds herself drawn to coffee and conversation on her way out the door.

"Around 11 or 12, you'll see me sittin' here with the guys," she says, smoking a cigarette with Mark and Ralph. "They're usually here when I leave on my night shifts."

Almost two hours later, she heads home with a fried pie Mark brought from the Stilesville hardware store where he works.

"See ya later, sweetheart," he says.

Things quiet down as more and more people filter out, but Mark, Ralph and a few others remain.

"See ya for breakfast."

The farewell chorus repeats until a late-night murmur replaces the late-dinner lull.

Diana sets to rolling silverware and the line cook busies himself tidying the kitchen. The bars have yet to close, and there'll one more rush before their shifts end at five.

Lori's words ring true, even after she has left.

And the "Open" light blinks faithfully as ever.