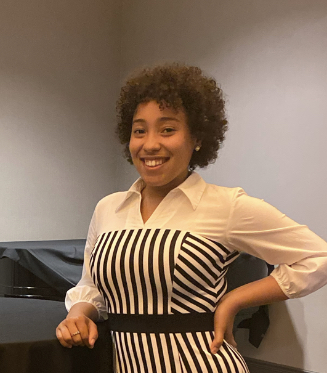 Most attend DePauw’s activity fair with a “why-not?” attitude. Sign-up sheets are filled but as the semester goes on, students get busy and become less and less invested in the organizations that once held their interest. The same can’t be said for junior Kayla Thompson, the current vice president of the Association of African American Students (AAAS), who joined the organization with the intent to effect change on DePauw’s campus and has remained committed to it since her first year here. Thompson hopes to use her position to grow AAAS and encourage DePauw’s Black students to “engage with Blackness, in and at it’s intersections.”

As vice president of AAAS, Thompson’s leadership can be seen both in and outside of the organization. She held leadership positions in the Carribean Student Association (CSA) as educational chair, been a cabinet member on the Student Academic Life (SAL) committee, and is a Posse scholar. Within AAAS, Thompson has been first year chair as a freshman, event chair as a sophomore, and is now beginning her junior year as vice president

Thompson explains the value of taking part in so many different organizations on campus, as they put her in unique positions and diversified her perspective. Working with a large pool of students and faculty allowed her to understand “how the needs are different across each community” that exists on campus.

She also mentions how the positions that she held prepared her for the role that she currently has in AAAS. “Because I was on different executive boards,” she said, “I was able to see what I liked and what I didn’t like in terms of leadership.”

Thompson’s stresses how important it is for her to keep AAAS in mind while meeting with other organizations, always wondering, “how can I include AAAS in this conversation?”

Re’Nae Dillard, a former AAAS president who has worked on the executive board since Thompson joined the organization, can attest to her dedication. Dillard recalls that Thompson was incredibly effective in relaying the needs of Black freshmen when she held the first-year chair position and her overall involvement in the organization has helped strengthen AAAS’ standing on DePauw’s campus. “She’s been an advocate [for AAAS] since day one,” said Dillard, “so it’s good to see her continuing that work and doing what she loves.”

As AAAS has begun planning for the semester and transitions to the remote space, some challenges have arisen. Thompson stated that the process has certainly been frustrating for her and the rest of the executive team. She notes that the board is ambitious, with exciting ideas and new-found resources, since many organizations have reached out to them as a result of the events of this summer. However, “now that a lot of us are remote, it’s kind of difficult to create those spaces in a physical sense.”

Thompson also recognizes that many students are experiencing a technological burnout of sorts, and is careful not to overwhelm members with excessive remote meetings to add to their already long days of staring at screens. She explains that AAAS has shifted from more frequent general body meetings to those that occur once a month, with the first taking place on September 24.

Another component to Thompson’s remote experience is that she is also living off-campus. She shared that living at home in New York City has made working with AAAS as well as academically difficult. Thompson expressed that not having a “space” to do work has made things challenging, especially since her junior year has brought on a more intense workload than she had expected. Still, as she navigates these new obstacles, Thompson is dedicated to making this semester “as productive as possible.”

As AAAS vice president, Thompson has big plans for the organization’s future. “My major goal is for AAAS to be perceived in a different way.” Thompson said.

She said that in the past “there was just this disconnect” and an idea among students that to be a part of AAAS, they had to be “woke.”

Thompson recognizes the importance of changing this image as it can make the organization appear intimidating. “It’s hard for a lot of people, especially those who are just now navigating what it means to be Black at a PWI [Predominantly White Institution].”

She hopes to change the way AAAS is received on DePauw’s campus; establishing it as a respected and important organization while also making it a space where students can feel comfortable. Her vision for AAAS for the organization to become a space for Black students here to connect and educate themselves. “People should take AAAS very seriously,” said Thompson, “but they should also feel involved and included”.

At the end of the day, Thompson wants AAAS to be an organization that lets its members know that “they’re a part of something big.”

Thompson is also very invested in creating space in AAAS for Black students at DePauw to thrive academically. Last year, she began planning an initiative called “The Academy of Black Excellence” wherein members of AAAS could connect and assist each other in academic endeavors. This would include things like tutoring services, study groups, and resources to help students work with the university’s Black faculty members.

While COVID-19 and remote learning has slowed down the process of bringing this plan to fruition, Thompson still intends to implement these services throughout her vice presidency. Former president Dillard assures that Thompson is dedicated to any project that she starts, regardless of obstacles. “She’s super passionate about all her projects and is always so committed when she puts her mind to something.”

Thompson hopes this year can be the beginning of a new era for AAAS, despite the challenges that might arise. She wants potential new members, especially first-years to know that they are welcomed. “Give AAAS a chance, we’re always willing to support and uplift each other.”