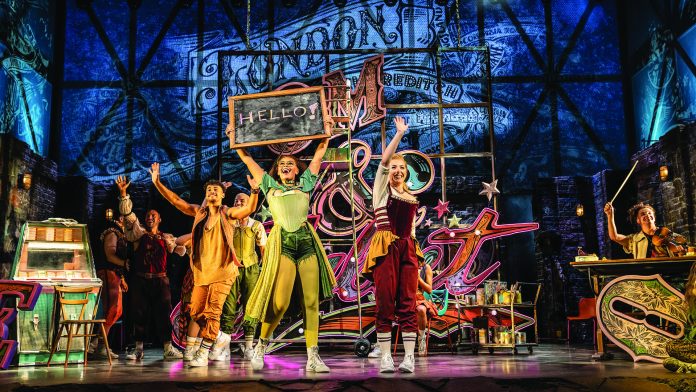 Shakespeare’s “Romeo and Juliet” went down in history as one of Shakespeare’s most famous plays– with its distinct ending of the two star-crossed lovers, Romeo and Juilet, dying at the end of the play (spoiler alert). “& Juliet” turns this original Shakespeare tragedy on its head with Juliet pursuing her newly single adventures after Romeo’s death. With a mixture of early and late 2000s hits, “& Juliet” is one of West End’s playful jukebox musicals telling the story of self-discovery, love, and heartbreak.

“& Juliet” debuted in 2019 as a coming-of-age musical with its sole focus on William Shakespeare’s character, Juliet Capulet. Over the course of this musical, there is a shift between Shakespeare and his wife, Anne Hathaway, in the rewriting process of the original Romeo and Juliet into the working plot of “& Juliet” with the addition of new characters such as Juliet’s best friends May and April, as well as new settings such as Paris, France.

Through the revision of the plot, viewers can see further development of Juilet’s character compared to the original Shakespeare play as she ventures to Paris with her two best friends and her nurse, Angelique. Juliet begins to experience her life in a more fulfilling way through her travels and a chance encounter with Francois, a French 20-something who she has more in common with than she could imagine. The plot thickens after the decision is made to bring Romeo back from the dead to pursue Juliet once more, which proves to be a new, twisted callback to the original.

“& Juliet” is not only a reimagining of Shakespeare’s most iconic play, but the jukebox aspect of the musical also makes it quite intriguing and will have the audience singing along to all of their old early and late 2000s favorites. Including music from artists such as The Backstreet Boys, Ariana Grande, Ke$ha and Jessie J, the songs serve as good pivotal points of Juliet’s adventure in France from her scenes at Francois’s party in Act One to the cafe scene and “Since U Been Gone” number by Juliet and her friends.

In the jukebox lineup, one of the more iconic song features included a mashup of Ariana Grande’s “Problem” and The Weeknd’s “I Can’t Feel My Face.” Though these were two interesting song choices for a mashup, this musical number displayed a distinction between the two singers, while  the color choices also enhanced the visual execution. Overall, “& Juliet” was one of the best jukebox musicals offered at West End and hopefully it will soon debut on Broadway stages in America.