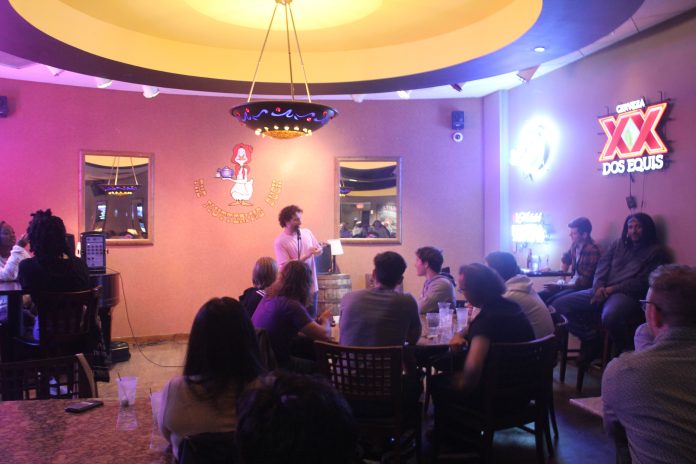 On Saturday, Nov. 5, 2022, Jack Woods ‘23 hosted his first stand-up comedy show for the school year at the Fluttering Duck along with Max Sorich and Aaron Chase.

For this first debut this semester, the Fluttering Duck made for a perfect location for students, faculty, and staff alike to get together and gather in an intimate setting to order food and drinks and also a great set up to view each of the comedians each set for the hour. Adorned in low lighting, the Duck offers the perfect atmosphere for enjoying lunch or dinner with friends or catching up with your significant other for a typical spot for on-campus dates. The Fluttering Duck also made the perfect location for an intimate comedy club setting that not only amplified the sets.

Filled with laughter from students, the night was split into three sets with Woods leading the first, Sorich in the second, and Chase ending with the third. Woods’ set featured jokes about DePauw culture, occasional self-deprecating humor, and comments about his relationship with his girlfriend. It made his set not only a good start but overall relatable to the students on campus. Next was Sorich, whose set notably included raunchy jokes about his parents and their sex life, which was one of the many highlights of the night, and last, Chase ended with the good old-fashioned method of comedy African Americans often love to indulge in which is making their white audiences as uncomfortable as possible with jokes of Lovecraft Country and more.

This was truly a night to remember from the jokes to the comfort food of funnel cake fries and an intimate space provided by the Fluttering Duck, and I look forward and encourage students to attend another comedy show hosted by Woods during the rest of our year here.