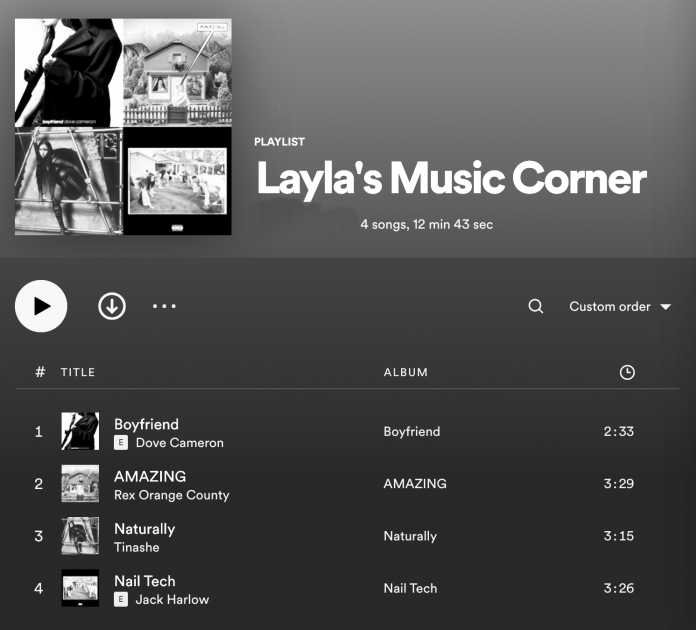 2022 has brought an exciting range of music from previously MIA artists, TikTok musicians, and last years’ stars. With the release of these four singles, 2022 is proving to be a bright year for music as many artists are coming through with their new releases for the year.

Released Feb. 11, 2022, “Boyfriend” is one of the many songs by previous Disney Channel starlet Dove Cameron, who is best known for roles portraying twins in “Liv and Maddie” and Mal in the “Descendants.” Cameron’s “Boyfriend” poses a challenge to a currently-taken love interest: what if the girl she’s interested in needs a girlfriend instead of a boyfriend. Backed with hypnotizing lyricism and undeniable jazz and indie-pop roots, Cameron flexes her acting through her confident vocal performance while centering her own queerness. After gaining traction from trends on TikTok, “Boyfriend” seems to be the perfect crossover from Cameron’s Disney career into the music industry.

Released Feb. 14, 2022, “Amazing” is Rex Orange County’s second release since the start of 2022. Debuting as the second single from his pending fourth studio album “Who Cares,” the track opens with orchestral strings and a subtle pop beat that focuses on the rush and experience of falling in love. With cute lyricism, Rex is at his lovelorn best as his smooth vocals praise his love interest from the initial verses of the track to the choruses. Not only was this track a timely release during Valentine’s Day, but a promising teaser for Rex Orange County’s pending album due in March 2022.

Released the same day as “Amazing,” Tinashe’s “Naturally” is one of the four new tracks set to be released on her deluxe edition for her 2021 album, “333.” Last year, “333” was an exciting new chapter for Tinashe, as it was the first album she released as an independent artist. “Naturally” is a moody and smooth bop from the singer backed by a mellow and chill beat discussing how natural her escapades with her love interest feels. “Naturally” is a timely release for Valentine’s Day 2022 and feeds into her fans’ excitement for the extension of the upcoming debut release of “333” in early March 2022.

Released Feb. 18, 2022, “Nail Tech” is Jack Harlow’s first release since the start of 2022. After a year void of album releases, Harlow’s next release was highly anticipated. The background of the track is adorned with the faint sound of trumpets as Harlow boasts about his material gain within his time in the industry and touches on the themes of critics doubting him despite his high and rising status as a musician and rapper. With his last solo release being in 2020, “Nail Tech” is a strong return for Harlow tha sets the bar high of what we will expect to see of him this year.