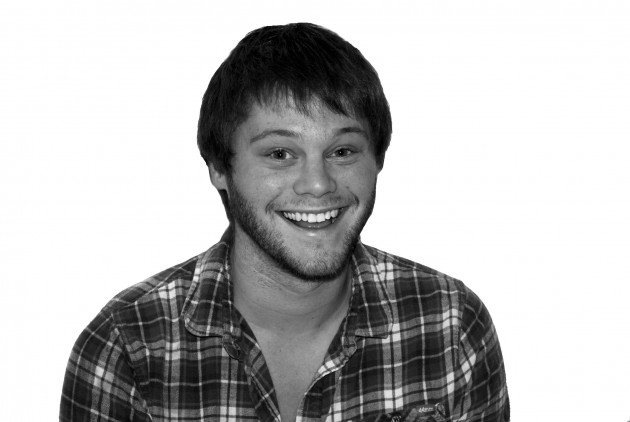 All I could come up with was part two of the beard and a way-too-early editorial on Christmas. All the while, the theme song from "Boy Meets World" was stuck in my head, and I realized the lyrics make absolutely no sense.

It finally occurred to me while theorizing on what we'll be eating for Christmas dinner (show me the lamb!), there is one last DePauw tradition I have yet to discuss.

That, my friends, is a giant rock with random lines on it that I may or may not have urinated on. Kidding, public safety. Winky, smiley face.

In case you're a freshman living under a boulder (ha, it's funny because I'm talking about boulders), or a very confused person from out of town that desperately wishes he or she hadn't opened up this paper but somehow can't stop reading (you sick fool), we have this little tradition at DePauw.

In short, a person willingly strips down his or her clothes and runs a good distance to a giant boulder and back. Unless you're a Phi Psi — then you could probably knock out a boulder run on the way to the shower.

Why are we drawn to it? Why do we flee naked to it? Why does it attract our urine? Why do I keep hinting at peeing on it?

It seems the boulder has become something much more than a rock or an alternative fire hydrant for dogs. It represents at once the randomness, exploratory nature and overall idiocy of a college student.

Who doesn't see themselves telling the story of their first boulder run 20 years from now to anyone who will listen? It's a staple of our existence and its college students to our naked core. Literally.

Now that I have made the boulder run into something ridiculously important, it's necessary to remind upperclassmen and to inform freshmen of the first snow. Here's what must be done, step by step.

Look out window. Recognize that the white flakes falling are, in fact, the first snow.

Inform nearest friends of this occurrence. Let yourself dance a little. Not too much, just enough to get excited.

Remove clothing – except for shoes, blistered feet are uncomfortable. Wearing a scarf would be kind of funny and acceptable.

Run to the boulder. Don't forget to work the crowd. Nothing makes a boulder run better than a group of innocent observers cheering you on. I'm indifferent towards naked snow angels, but if you think it's worth frostbite on your whole body, go for it.

This part is vital. Run back to base. There's nothing more awkward than a naked person hanging out on the boulder, especially if I have a full bladder. Joking, again.

OK, I couldn't resist … I want to remind everyone that Tuesday was not only the start of no-shave November, but the beginning of a movement.

We could all be walking around Nov. 30 in flannel shirts, eating pancakes with full beards. Finally, if you want an early Christmas column, comment on this editorial online — mostly because I want to see if people actually read this online.

And let me just give a formal apology to the person from out of town that decided to read this.