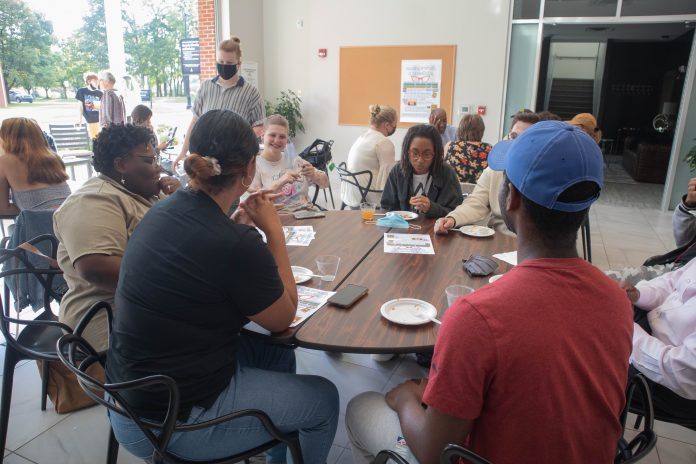 House of Opulence intends to strengthen DePauw’s Queer community through a call-to-action for allyship and student support across campus.

Aaron Trinidad, a current sophomore from Chicago, is one of the current house fathers for the House of Opulence, a recently established and unique Queer-based organization on campus.

House of Opulence takes its name from New York City’s underground ballroom subculture of the ‘80s and ‘90s, during which the LGBTQIA+ community established makeshift houses to resemble family structures for transgender men and women, and Black and Latinx members who had often been put out on the streets.

Queer Students of Color, the outline for House of Opulence, was an organization with similar goals. After rebranding with Isaiah Spears, another house father and senior at DePauw, the organization was scrapped and transformed into the ballroom-influenced organization.

The end of the 2021 Spring semester was the turning point for the two Queer SOC members, who both wanted something “bigger and better.” In rebranding, they agreed they wanted “wealth and prosperity” to embody the Queer community, giving birth to the early stages of the House of Opulence.

They spent the end of last May and the summer brainstorming which elements of ballroom culture that they could implement on campus.

The ballroom scene of the 80’s and 90’s, which gained recognition from FX’s series “POSE,” served as inspiration for the House of Opulence. These balls involved multiple houses, many of which would vogue, walk, and perform in different categories in competition with one another for trophies.

House of Opulence intentionally left out these aspects of competition, focusing on using the subculture to implement more Queer culture on campus. Trinidad emphasized that ball culture should foster empowerment, not competition among students.

However, the organization plans to throw a campus-wide ball party this semester, and a drag show by the end of the 2021-2022 school year, with the desire for all communities to show up in support.

A crucial element in rebranding, the house fathers found, was the involvement of everyone on campus. What sets the House of Opulence apart is not only the ballroom influence, but the emphasis on allyship involvement. A lasting imprint and legacy for the community of Queer students on campus lies in the effort of the DePauw student body as a whole.

“It’s one thing to say you’re an ally. It’s one thing to be there for your friends behind closed doors, but I think that in order for something like the House of Opulence to survive on campus, and for people to really show their support for Queer students here, they need to show up and show out,” Trinidad said.

Attending big events to be held by the House of Opulence such as the ball party and drag show are ways for allies and Queer students on campus to “show up and show out” and amplify the voice of the Queer community at DePauw this year and years to come.