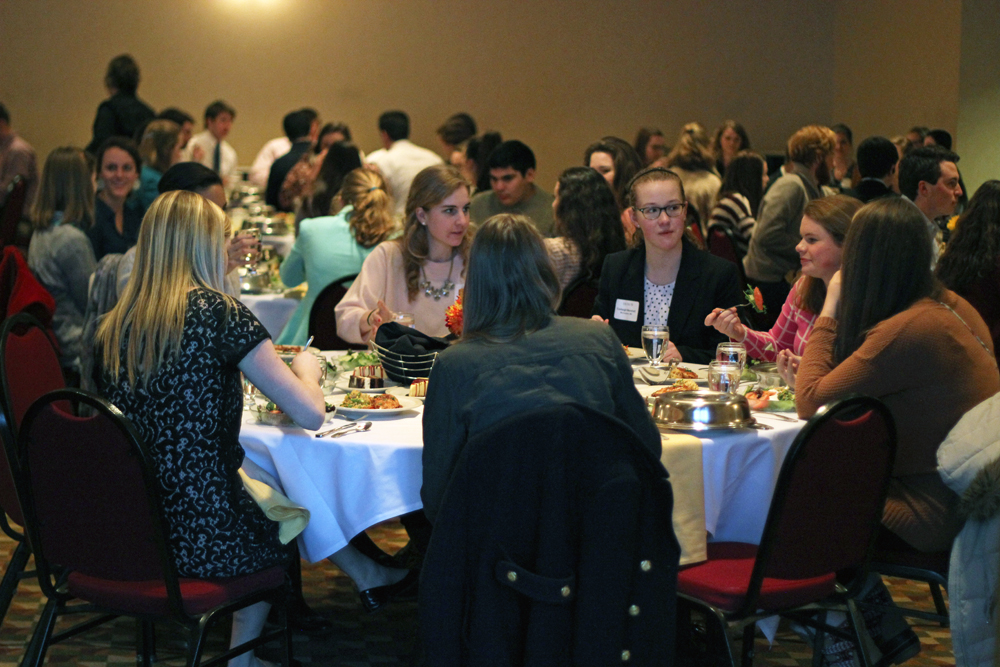 Prospective students eat dinner at the Inn and chat with current DePauw
students during Honors and Fellows weekend. Interested students
interviewed with directors of the fellows and honors program
on Sunday and Monday as part of the application process.
SAM CARAVANA / THE DEPAUW

Despite Saturday night’s heavy snowstorm, the majority of prospective Honors and Fellows students made their way to DePauw University for a weekend of programming and their formal interviews.

Each separate Honors and Fellows program has their own system for their interview process but the majority of interviewers consist of faculty or staff, DePauw students currently involved in a honor or fellows program and occasionally alumni. The Management Fellows Program received 135 applicants for the Class of 2019. Rummel is one out of the 80 Management Fellow Program applicants who received an invitation to have a formal interview.

“I thought I was going to only have an interview with students but I interviewed with the head of the program,” said Rummel. “It was kind of scary but a good learning experience.”

The Honors Scholar Program received 225 applications by the February 1 deadline and 174 were invited to DePauw for an interview. During the application process, depending on which program the student is applying to, admitted students are asked to submit resumes, cover letters and an essay.

“There is no right or wrong answer,” said Welch.

The honors programs facilitates formal interviews based on the content of the student’s essay.

“The interview is an intellectual dialogue and exchange, and although students are often uncomfortably pushed they respond really well during the interviews,” said Welch.

Media Fellows director Johnathan Nicolas-Pethick agrees that their pool of applicants was also very impressive. The Media Fellows program had a total of 94 applicants apply to the program, which is the highest number of applications they have ever received, and invited 65 students to DePauw for formal interviews. Although Nicolas-Pethick is really excited about the group of applicants that were interviewed he is also excited about the programs growing numbers.

“There is a size given to our curriculum that works between 24-28 students,” said Nocolas-Pethick.  “That said, we are open and thinking about growing a bit if it makes sense but we don't want to compromise the integrity of the education, courses or experiences that are offered in our program.”

The honors and fellowship programs do not have a certain date declared when students will be selected for their specific programs. Due to inclimate weather and other circumstances, programs still have interviews to complete.

“If I don't get into the program I probably will not consider DePauw, but if I do get in I will highly consider attending DePauw in the fall,” said Rummel.

“We extend invitations to all qualified students in hopes of receiving their acceptance of the invitation later in the month. The average incoming class of Management Fellows is 50 students,” said Villinski.

Unfortunately, due to the large snowstorm, several students missed out on the weekend activities and as a result had interview via skype or on the phone. 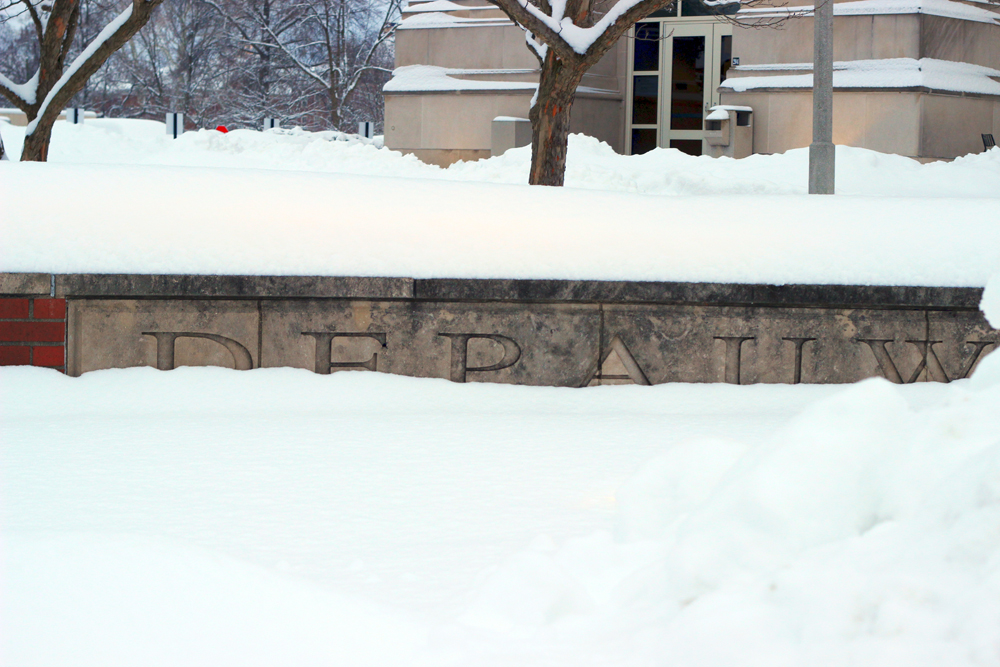 “Each program had devised their own contingency plan to deal with the potential weather in the days leading up to the weekend, which included offering alternative interview dates and phone interviews during the original interview times,” said Villinski.

After two months of planning, Welch and her team of students and staff were able to reschedule phone interviews in ninety minutes.

“Friday afternoon I sent 103 students inviting and informing them that if they felt uncomfortable to make trip to campus we could schedule a phone interview about a third students took up my offer,” said Welch.

The Management Fellows Program only had 18 students out of 85 who were not able make it to DePauw on Sunday; however, the majority of students who could not attend were available for phone interviews.

“It was intense but it was done and I had an amazing group of students and faculty who rallied,” said Welch.  “Flexibility was the word of the day and I am humbled by the amount of faculty and student support that allows the weekend to take place.”

The Media fellows program also had 12 students who were unable to make their interviews due to poor weather.

“The weather threw us a curveball but all said and done I am really pleased how the weekend came together families who came braced the weather and I heard only positive remarks, everyone was in good spirits which makes up for the amount of work put into the weekend,” said Welch.

Although the weather kept some applicants out of Greencastle, the students that were able to enjoy campus tours, dinner at the Inn with students who are currently in the honors and fellows program, as well as overnight stays and panel discussions.

“We say the weekend was a fantastic success: We met a lot of very bright, talented students, who we hope will be Tigers in the future; we were able to showcase our current students and hear from prospective students and families how impressed they were with the accomplishments, poise and charisma of our students,” said Villinski.