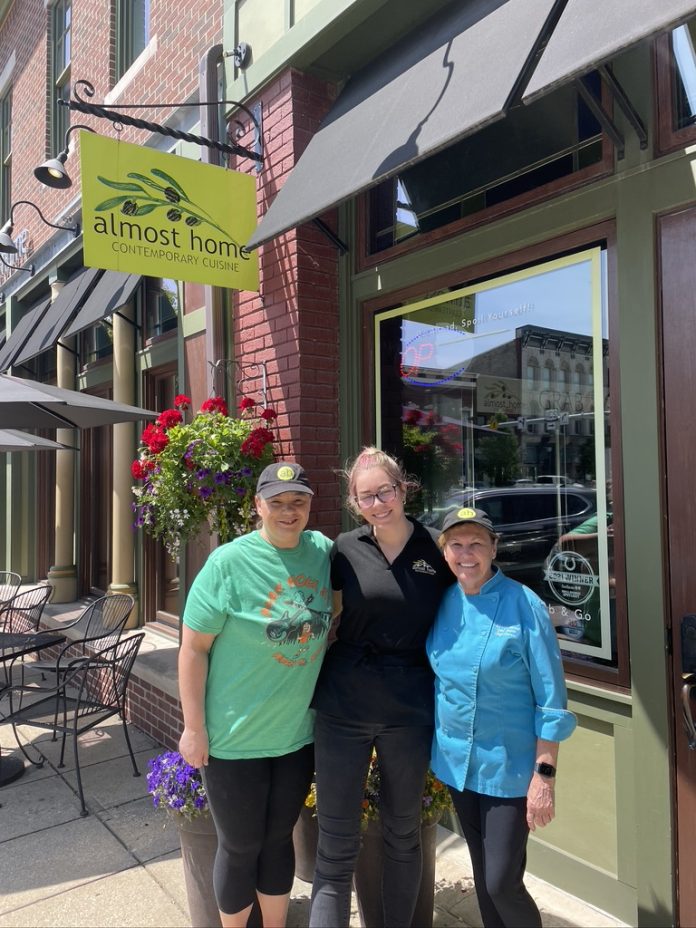 In 1990, 32 years ago, Gail Smith and a friend decided to start a tea room that was only open for lunch in Greencastle, IN. She served chicken salad sandwiches, broccoli cheddar soup, and homemade desserts which are all still on the menu. Since then, Smith decided to expand the dining options to open on more days and at dinner time as well which is how Almost Home became the restaurant that the Greencastle community knows today.

In 2008, Smith was able to buy the whole building the restaurant is currently in and create the Swizzle Stick Bar as well. Besides owning Almost Home, Smith started First Friday, an event that takes place in downtown Greencastle that starts the first Friday of May and goes all the way through to the first Friday of October. She also started the Greencastle Music Fest. “I'm pretty much the brand you know,  I'm the face of the business and people know me and I’ve done a lot for downtown,” Smith said.

However, First Friday and the Greencastle Music Fest have been taken over by Main Street Greencastle and Almost Home remains Smith’s priority. “But you know my goal is to make sure that Almost Home is always here,” Smith said.

Alongside Smith is her Kitchen Manager, Chef Liz. Liz has been around Almost Home for 15 years. She was trained locally as a chef and then went to Area 30 to go through their culinary program where she graduated in 2003. Smith said, “and now she’s come back, 15 years later and she’s my main person. She does it all. I count on her a lot.”

Chef Liz loves the relationships she has been able to build with people in the Greencastle community as well as the DePauw community. “You build relationships here too with local people that you see every day or every weekend, but then DePauw students as well. It's good for us to have those relationships with you guys, you know, catering or anything like that. That's what I like about here is it's all local. You meet lots of nice people,” Chef Liz said.

One thing about Almost Home that makes it unique is its ability to sustain its restaurant for 32 years. “you know we've got a loyal following. We've had people that meet here, they're coming across the country and they meet here. It's just one of those places where you walk in and you feel like you're almost home you know, it's not you know, even with our servers, you know, I try and train them. It's not about the food as much. It's about the hospitality,” Smith said.

Almost Home is also a restaurant to bring people together. It’s not so much about the food as it’s about relationships and spending time with people. “We want to have that almost home family you know atmosphere. And it's also unique because I have never worked probably was such a strong staff and a staff that's mostly women that I liked. I really like that,” Chef Liz said.

As far as the name goes for the restaurant, Smith and her friend just stumbled upon it. “We were just thumbing through magazines and we turn the page and there was this subtitle that said almost home and we both looked at it and said that's it and we still have that magazine,” Smith said.

Along with Chef Liz, is Smith’s morning manager, Morgan Allen. Allen started working for Almost Home three years ago as a hostess, started serving full-time two years ago, and is now the morning manager and helps out with catering and the night shift. “When I first started I was a very shy and a reserved person. I didn't talk at all hardly. I would say that the people almost home are just so amazing. The staffing is so amazing. Since working here I’ve really stepped out of my shell a lot,”  Allen said.

Allen really looks up to Smith and refers to her as her mentor. “I've learned a lot through Gail. I've learned how to be a really good manager through her. She's so smart and so wise. I just cannot thank her enough for how much she's done for me and how much I've grown since she started here,” Allen said.