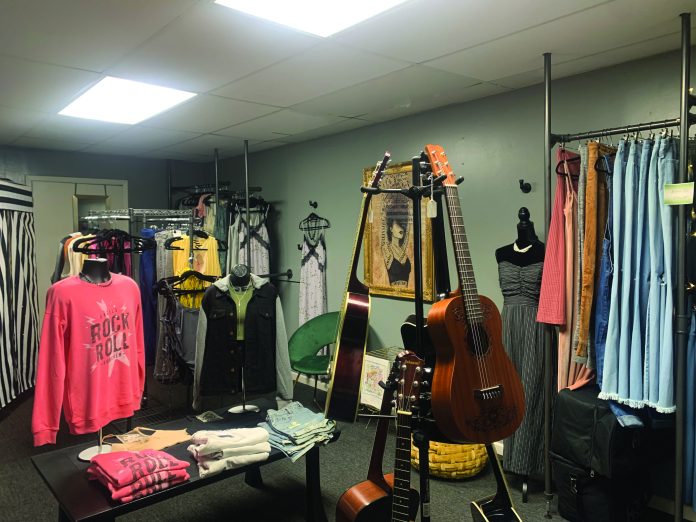 When COVID-19 hit in the spring of 2020, Tammy Keenan faced a midlife crisis. She previously worked as a healthcare executive and was sent to work at home like most people across the world were asked to do. This change seemed to be the perfect opportunity for Keenan to pursue the dream she has always had: owning her own store.

Keenan and her family moved to Putnam County in 2002, but due to her job she was never involved with the community of Greencastle as much as she wanted to be, so this store was able to give her that while contributing to the community as well.

“I was ready for some big change. And I’d always wanted my own business, my own store. The way I came up with this store, it's what I call a music boutique,” Keenan said.

#Harmony opened in August of 2021 at 5 W. Franklin in downtown Greencastle on the square. Originally Keenan envisioned a clothing boutique, but as the idea came to life, it became a little bit of everything.

“I wanted to be able to sustain and support the community with some other idea or thought and our music store closed in town so we no longer had a place for people to buy guitar strings or clarinet reeds. And so I decided to add a little bit of that and that's kind of taken on a little bit of a life of its own,” Keenan said.

Music has always been a part of Keenan and her family’s life. “I've loved all different types of music since I was a little girl.  My husband and daughter both play instruments and have a love for music.  It's a big part of our life,” Keenan said.

Since Keenan opened her store in the midst of COVID-19, one of the hardest parts was finding an affordable location and increasing sales because the pandemic has caused an increase in economic inflation.

The store features apparel, gifts, decor, and performance supplies. It is also a space for musicians, entrepreneurs, and creatives.

According to Keenan, Greencastle has an extensive music scene and her store allows her to be involved. “So when I came back here it's been great to really get to know people here, especially the music scene. It's a lot more vibrant than people would have imagined.”

One professor in particular who helped Keenan was Harriet Moore, adjunct professor of music at DePauw University. Moore jumped at the opportunity to help Keenan because “she has such a dear personality and just put so much into it that people are drawn to her and want to come in and see her merchandise.”

Moore sends her students to Keenan’s store when they need something repaired such as strings or guitars. Keenan works with Dan Brush who owned Greencastle Music Center before it closed and is the current owner of Brush Music Repair. He repairs instruments for her and anyone in the community. He restrings guitars, ukuleles, violins, etc. “You name the stringed instruments that come into her store and I can repair it,” Brush said.

Brush closed his store because everything was turning digital and that isn’t his thing. He’s an old-school guy, so he wasn’t willing to hop on the new technological train. However, he kept his repair business and extended his knowledge of music and repair skills to help Keenan. “I'm thrilled to death that Tammy opened the store because Greencastle needs a music store. But it needs to have a strong online presence and she covers that. She's just the person to do it,” Brush said.

According to Brush, since #Harmony recently opened, there is still a need for marketing and word-of-mouth to attract customers. Since he was the “music guy” in town for years he gets to introduce people to Keenan and tell people there is still a music store in Greencastle.

“I’m really happy about it. I tell all of my old customers and everybody I talk to because a lot of people don’t realize she’s open, so I get to spread the word quite a bit. I tell them there is a music store and I send them to Tammy, so we have a good thing going,” Brush said.

Keenan also contacted Fouty. Fouty assisted Keenan in figuring out an initial budget for her store and potential revenue streams.

While they worked together, Fouty discovered Keenan’s love for Greencastle and music. “Tammy is a positive, upbeat woman of faith. I enjoyed her energy and enthusiasm and desire to bring this new business to the downtown square of Greencastle,” Fouty said.

Since the opening of the store, Fouty has been a frequent customer. “I was pleased with the variety of items she has for sale, from clothes to vinyl records to guitar strings to a piano-themed toilet seat. Tammy has created an atmosphere of happiness and joy with her ‘live’ music and music-themed items for sale,” Fouty said.