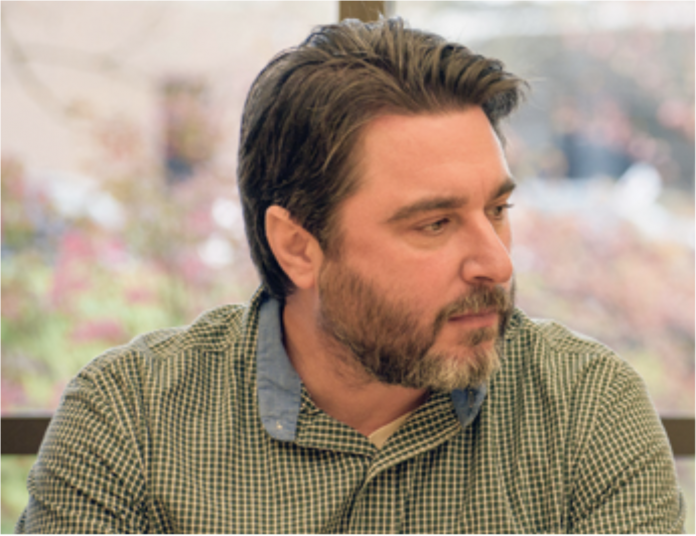 We don’t think of Hanna Street Cemetery as part of our campus, but there it is in our midst, tucked in a shaded lot between pastel duplexes and Blackstock Stadium. The oldest stones here date back to the first decades of the nineteenth century, before statehood, before DePauw. On some idle afternoon, when you feel stuck in your work, take a walk there among the stones. Read the names and the dates, and find one year repeating: 1918 . . . 1918 . . . 1918. Many buried under these weathered and crooked monuments of 1918 lived short lives—nineteen years, eleven, three. Plastic wreaths and miniature American flags prove that those who rest here are not yet forgotten.

In Katherine Anne Porter’s Pale Horse, Pale Rider, a novella of the 1918 influenza pandemic that I included in my fall course on the literature of pandemic, a young woman, Miranda, falls in love with Adam, a dashing soldier, just days before she catches the virus. She sinks into deep fever, and when she awakens a month later, she learns that Adam has died of flu. She repeats the news to herself, blankly, before she regains composure and orders her friends to buy her new clothes, new shoes, new perfume. She simply can’t endure this dreary hospital any longer. Her friends cheer—Miranda is back to her chipper self, and in no time at all. When they leave her bedside, however, Miranda turns her head and sees Adam’s ghost sitting beside her.

I now seem to live in this strange moment with Miranda, suspended between an impulse to buy and an impulse to mourn, looking forward to happy holidays and backward to a horrible year of attrition. I browse Amazon, adding to my wish list, while reports of mobile morgues in El Paso and an imminent death toll of a quarter million sound at the edge of my hearing. I switch to a football game, and see weird cardboard cutouts of simulated fans in an empty billion-dollar stadium. With their frozen looks of simulated delight, the cutouts look vaguely embalmed.

The game cuts to an Amazon commercial, and I follow a ballerina dancing through shadowed, empty streets. Quarantined souls watch from their windows, shining flashlights, searching to connect to her indomitable life. Search, add to cart, proceed to checkout. “The show must go on,” the commercial tells us. You’re still alive. Shop.

During the Great Plague of London in 1665, Samuel Pepys, another memorable figure from my course, likewise sustained his mood with an anodyne cocktail of commerce, consumption and fantasy. On August 15 of the plague year, Pepys’s famous diary records a dream of erotic dalliance with “my Lady Castlemayne.” It was, he confesses with relish, “the best that ever was dreamt.” Pepys’s spirits stay buoyant throughout the day, as he secures a hefty investment in copper and enjoys a merry supper of venison pie with his wealthy friends. The day turns dark, however, as he walks home from the party. “To my great trouble,” he writes, “I met a dead corpse of the plague, in the narrow alley.” He confides to his diary, “I shall beware of being late abroad again.”

In moments of pleasure and prosperity, we banish the dead from our thoughts. In a pandemic, we find, like Pepy’s, that they appear to us, inconveniently or indecently: a ticking counter, a flashing image of bodies in New York or El Paso, wrapped in sanitary plastic and stacked in refrigerated trucks.  We assert our routine against pandemic, but the dead assert themselves against our routine.

José Saramago’s novel Blindness, the most fearsome book in my course, imagines our routine in catastrophic collapse. A pandemic of blindness reduces a city to a dirty, starving mob of scavengers, scuttling through abandoned streets like sightless crabs. The dead putrefy where they fall, and feral dogs feast on the bodies. A woman, the sole person immune to the affliction, finds the corpse of a neighbor and buries the remains in an overgrown garden. She cries out to the empty flat block: “She will rise again!” It’s an absurd act of defiance, the burial of this one body in a city of corpses. The act manifests the woman’s simple creed: “if we cannot live entirely like human beings, at least let us do everything in our power not to live entirely like animals.” Living like human beings means reconciling with the dead.

I don’t think we’ve yet reconciled with our quarter million. Many have taken their last labored breaths alone, without deserved care or justice. Reconciling with them means more than counting them up and collecting the data. We can’t bury them with venison pie, football games, or new clothes. We need to look at them, as Miranda does, relinquish something instead of buying, wither a little with them. Close your wish list, turn off your screen. Take a walk to Hanna Street (wherever your Hanna Street is), look a while, and then get on with the show.