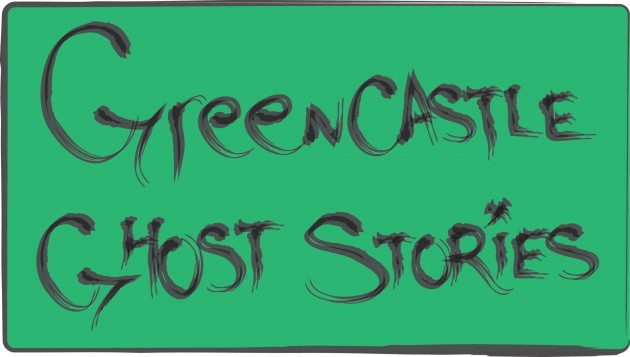 The brisk fall weather may not be the only explanation for the sudden chills that appear late at night. For decades, Putnam County residents and DePauw students alike have connected their shivers to the various ghost stories associated with certain places in the area. As the Halloween festivities draw to a close, those wanting a good scare do not have to travel as far as they may think.
While Wes Wilson, coordinator of DePauw archives and special collections, said he likes well-documented stories that come about from facts, he is quick to provide students with resources if they are interested in learning more. Every year, he is approached by individuals curious about the library’s copy of James Macpherson’s The Poems of Ossian, the Son of Fingal, which is said to be haunted.
“The story makes it kind of fun and interesting and brings people into the special collections every year,” Wilson said. “But, the importance to us is that it’s part of a larger collection.”
While Wilson is interested in the historical nature of ghost stories, senior Austin Bonta enjoys the entertainment value of the urban legends. This fall marks Bonta’s second year leading the DePauw Haunted Tour, where he shares the myths of the community’s haunted past with those who join the tour. Bonta said that urban legends help individuals attach meaning or deeper memories to places they know and care about.
“Every college has ghost stories or some sort of haunting type tale that may or may be true but students pass it down,” Bonta said. “I think it’s important because it matters to students to make their place feel special.”
Bonta will be leading the second part of his DePauw Haunted Tour tonight at 8 p.m. The tour, which is open to the public, will start at the steps of the U.B. Building.

Roy O. West
Locked away on the second floor of DePauw’s Archives and Special collections area resides The Poems of Ossian, the Son of Fingal, part of the collection of books donated to the university by former Indiana Governor James Whitcomb after his death in 1852. According to legend, a boy was so engaged in the book he snuck the book from the restricted section of the library and took it home to finish it. After a long night of reading, the boy turned off his lights to go sleep. The boy, sensing that he was not alone, woke up to the ghost of Whitcomb. When Whitcomb’s ghost demanded the whereabouts of the book, the boy panicked, promising to never take a restricted book out of the library again and returned the book the following morning.
Much later, a group from Hoosier State Paranormal decided to investigate the archives collection and set up special equipment to search for the ghost of Governor Whitcomb and his presence near the book. The group set up their equipment after the library closed, turned off the lights and within a few minutes witnessed a flash of light slide down from the computer screen at the end of the table where the book sat. Investigators discussed the recorded audio of the ghost responding “I’m dead,” when asked the whereabouts of Governor Whitcomb.

Edna Collins Bridge
The Edna Collins Bridge, known as one of the famous bridges in Putnam County, is rumored to be one of the most haunted places in Indiana. According to myth, the spirit of Edna Collins began to haunt the bridge after she drowned there in the early 1920s. The bridge, built by her father, James Collins, was christened after the marriage and birth of James and Sarah’s fourth child Edna.
As a young girl, Edna would request permission for her parents to take her dog for a swim in the Little Walnut Creek that ran behind the bridge. The Collins would drop their daughter and dog off at the creek in Greencastle and would indicate their return later by honking their car horn. One day, when her parents came to pick her up and honked their horn, Edna did not respond. Despite multiple honks, Edna did not answer. Her parents, scared, left the car to look for her only to find her dog near the creek. The dog then led the Collins to where Edna’s body was in the creek.
To this day, visitors have said to witness seeing the ghost of the young girl behind the bridge with her dog, waiting for her parents’ return.

Sellers Cave
From the 1800s to the 1950s, DePauw students would stroll through the woods with their significant others and sneak romantic moments in the secluded Sellers Cave. Today, the cave is now closed off and condemned as one of the haunted landmarks in Greencastle. According to myth, the tunnels ran underneath most of DePauw’s campus and another cave near Boone Hutcheson Cemetery. When slaves jumped off the New Albany train near the forest, they snuck into these tunnels that ran through the town of Greencastle and DePauw’s campus. It is said that some of these exits and entrances to the tunnels may lie under East College, Old West College, which is now Roy O. West library, and near the Pi Beta Phi sorority house. Due to illness and starvation, many slaves did not reach their destinations. Some reports describe bodies falling out of caskets and into the cave. A ghost police officer has also been said to guard the inside of the cemetery.

East College
One rainy night, a janitor heard the cries of a young woman coming from somewhere in the building while he was cleaning. Upon opening the door to a room, he discovered the cries were coming from a lady dressed in a long black coat near the stairway. When he asked the lady if she was all right, shook her head slowly in response. Throughout his shift, the janitor continued to check on the woman to see if she was all right and received the same response. When he checked on her a third time, she was gone. According to legend, this was the ghost of an abducted girl who was hung in Meharry Hall. It is believed that her body was buried under the concrete of East College and still lurks throughout the building.

Pulliam Center of Contemporary Media
While assembling the Pulliam Center of Contemporary Media, builders approached trouble when constructing the elevator shaft. In the process, one of the streams under the building flooded into the elevator shaft. As a result, one worker was discovered dead, lying face down in the flood. Construction continued on as usual.
Evidence of ghost activity was not present until weeks after when a screaming sound was heard through the pipes near the elevator, traveling throughout the media building. The ghost has also been said to be responsible for operating the elevator.