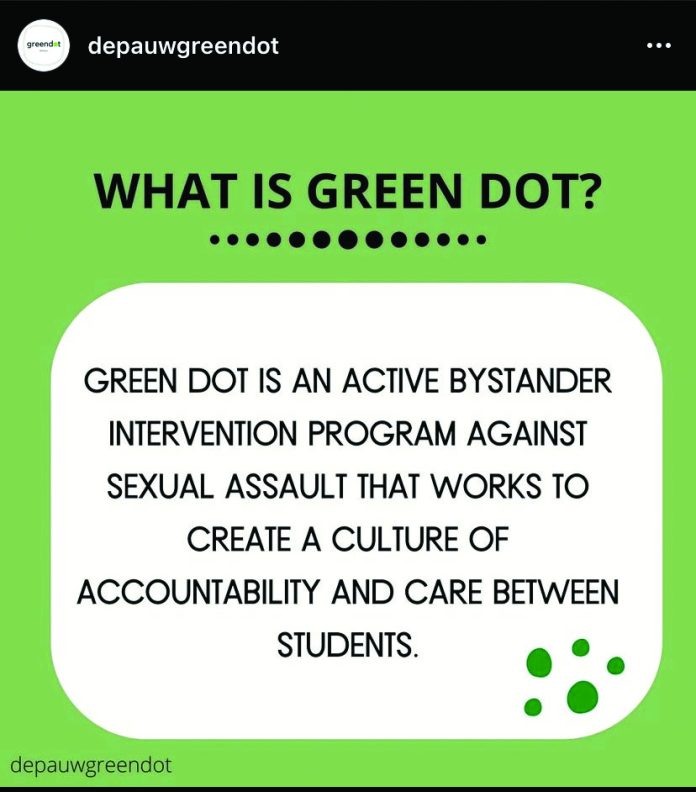 Green Dot, an international bystander intervention and form of prevention program, has re-launched at DePauw.

When COVID-19 hit campus in 2020, it hindered the program from being able to properly start-up again. With recent updates from DePauw’s COVID-19 Mitigation team that has declared campus to a Blue status, training was able to commence.

Green Dot was created by Dorothy Edwards, a former faculty member at the University of Kentucky, who studied campus sexual assault and other forms of power based personal violence.

Green Dot’s purpose is to educate and equip students with information and tactics on how to intervene in sexual assault, dating violence, and stalking situations in and out of campus through an intensive three and a half hour training course consisting of learning how to respond when confronted with various risky scenarios.

According to the US Equal Employment Opportunity website, a testimony by Edwards stated that the program has been implemented by over 300 college campuses and universities, every branch of the US Military, and is currently working on a partnership with the US Air Force. This program was introduced to DePauw in 2015. The current team is made up of Jeannette Johnson-Licon (JJL), associate dean of student success, Sarah Ryan, director of the Women’s Center, Dorian Shager, dean of campus life Frae Binder, director of Fraternity and Sorority Life, and Angelique Serrano, Housing and Residence Life coordinator.

Now with training in session, the team is excited to get back into action and to return to what it was pre-COVID.

After training for a week in Washington DC, Sarah Ryan, Director of the Women’s Center said, “Green dot is actually the first thing that gave me hope that we would be able to actually address, change our campus culture, and reduce the amount of people being harmed on our campus.”

While DePauw is a small campus, it is not immune to issues like domestic violence, stalking, dating violence, and or sexual assault.

“As a sexual assault survivor advocate, I interact with students every single semester who have been affected by these forms of violence. DePauw, like all institutions of higher education in the United States, are dealing with issues surrounding campus sexual assault, and Green Dot is proven to be one of the most effective forms of reducing that kind of violence on campus,” said Ryan.

Heather Wright, associate director of Student Wellness Programs, was especially motivated to join the Green Dot team after seeing the results of a 2014 study. The study looked at three campuses, one that had Green Dot and two that had no bystander intervention training.

“Rates for perpetration for stalking instances and sexual harrassment were significantly lower for males who attended Green Dot and overall victimization was lower for both men and women,” Wright said.

DePauw students who have participated in the program have shown to utilize these learned skills even after graduating.

Specifically Ashley Beeson 19’, who was an intern for the program and is now the assistant director of employer relations on campus, said Green Dot has given her the skills to feel empowered in a community you have an obligation to.

“A community like DePauw, there’s a lot of power dynamics and social pressures that go into any situation. So you can have the gut feeling that something is wrong, but it doesn’t mean doing something about it or knowing where to start is easy. So it's nice that training gives you different ways to take action that are really helpful to actually implement in your life.”

Beeson volunteers with a group in Indianapolis called Overdose Lifeline that provides access to narcan and naloxone, the opioid reversal drug, to reduce the stigma of addiction.

“I always carry narcan with me and I’m constantly looking out thinking, ‘Is there a way I can intervene to help reverse an overdose to prevent a death?’ Being an active bystander is in no way limited to just being a college student,”Beeson said. “There are plenty of real world situations that aren’t as extreme as an overdose, but still the Green Dot techniques are super applicable to any space you’re in, even not at DePauw.”