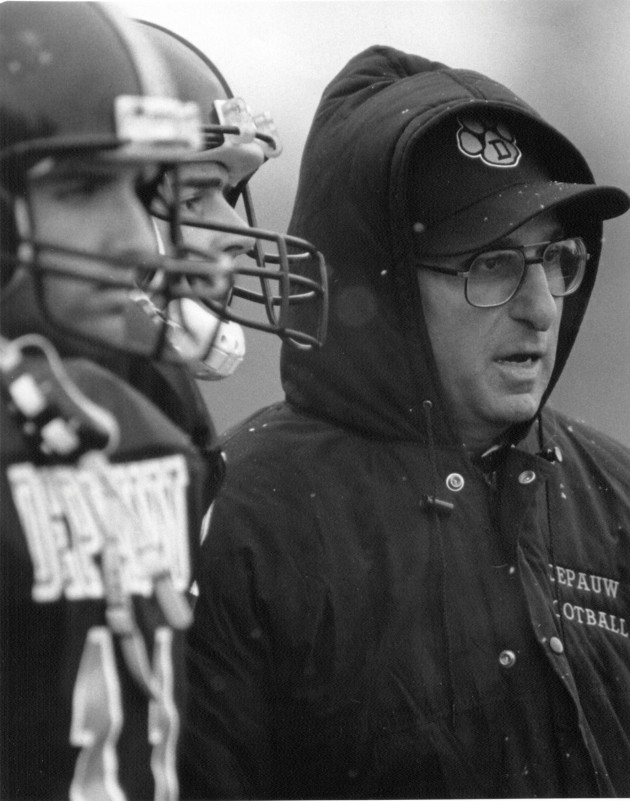 Former head coach of the DePauw football team Nick Mourouzis had an 11-11-1 record in the Monon Bell Classic in his 23 years at the helm from 1981-2003. As much as it is special for the players of the game, the coaches realize and embrace the intensity of Monon as well. The DePauw’s Sports Editor Michael Appelgate sat down with coach Nick to talk about coaching 23 Monon Bell games.

The DePauw: How did you and your coaching staff prepare for the Monon Bell Classic?

Nick Mourouzis: I always said it was a season in and of itself. You could be 9-0 or 0-9 and it’s just like a season. There are red-letter games and there are key games. This is a key game.

I used to tell players, ‘This is 60 minutes, and a lifetime to remember.’ We knew that the intensity level would be automatically up because everyone is thinking about it. It’s the last game of the year, and it’s a ‘senior bowl.’

We had to do a very good job in watching film and finding some key plays we could work or key things we could stop their offense with. Special teams also play a big role in this as well.

What I really talked about was having emotional control.

TDP: What sort of things did you stress in the first day of practice during Monon week?

NM: You didn’t have to talk about too much because the emotional level was just magnified. It’s just amazing. Everyone goes 100 percent, and that’s what you have to do on every play.

It is a full 60 minute game, and you have to prepare yourself. You need to be intense, but keep yourself under control — to not commit penalties. That’s a key thing.

TDP: How did you balance the players’ excitement and intensity and preparing to face Wabash on the field?

NM: It’s sort of built in because everyone knows the importance of the game. They are going to remember this forever, so they would want to go out with a victory.

Here you have two great universities, and both sides want to win so they can brag about having the rights to the bell. There’s enough intensity that you don’t have to magnify it. We want to bring everything out and have everything covered offensively and defensively.

TDP: Coach Nick, you went 11-11-1 in Monon Bell Classics in your 23 years as head coach. How intense was the game on the field?

NM: The intensity was so amplified you could literally cut it with a knife. Everyone feels it, the hits, blocks and the tackles, everything is 100 percent.

I always look forward to it. There’s nothing like it, because players know each other from high schools because they are predominantly in-state. The intensity and rivalry is magnified.

In all my 23 years, this will be my 31st game I’ve seen. There has been only one game where two players got in a fight and were kicked out, only one time when players started fighting against each other.

TDP: What does it come down to, to win this game?

NM: Emotional control comes into this, but you’ve got to have Tiger pride baby.

You’ve got to have Tiger pride where you want to go out and play perfect. You don’t want to fumble the ball, and you have to win the turnover/takeaway margin.

Whoever has won the turnover/takeaway margin will win the ballgame. So that’s why we don’t want to be ourselves. The only team that can beat us is ourselves, and if we approach it that way, we should win the ball game.