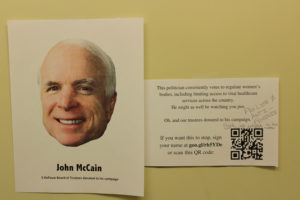 Five DePauw University seniors have begun a change.org petition campaign, urging Board of Trustee members to end their support of politicians whom they say support policies that contradict DePauw’s values.

This initiative was started as a class project and has quickly gained attention around campus and online.

“He might as well be watching you pee,” reads a poster next to Marco Rubio’s face in the women's bathroom on the second floor in Harrison Hall.

“The politician consistently votes to regulate women’s bodies, including limiting access to vital healthcare services across the country,” it reads. “Oh, and our trustees donated to his campaign.”

Female students arrived back to DePauw to find signs in the women’s and all-gender restrooms in Asbury Hall, Roy O. West Library, Harrison Hall, East College, Julian Science and Mathematics Center, The Green Center for Performing Arts, Hoover Hall and Olin Biological Sciences Building. The posters have politicians’ zoomed-in faces and a call to action to scan a QR code.

The QR code goes to a change.org petition titled, “DePauw Board of Trustees should pledge to make no political contributions to harmful candidates in the upcoming 2018 election cycle.” The petition has, at the time this article was written, 235 signatures over the last 24 hours.

The architects behind the posters, and the petition, are seniors Victoria Houghtalen, Hyeree Ellis, Zoe Collis, Jane Pera, and Megan Odaniell. The motivation was a group project on social awareness where the five seniors decided to focus on women's rights and politics.

Through the process of narrowing down their topic, the group decided to focus on questioning the University, specifically DePauw’s Board of Trustees.

Through searching public records, Houghtalen said they found 24 Board of Trustee members who have donated to political candidates whose actions contradict DePauw’s values. Specifically politicians who support laws that can be interpreted as regulating women’s bodies, fail to protect DACA students, and support the recent Republican tax plan that calls for the taxation of University endowments were the ones whose faces were featured on the posters.

They found all their information regarding donations on the federal election commission's website.

“I don’t want trustees to donate to politicians who are harming our students,” Houghtalen said. She said that by donating to these campaigns, the members of the Board of Trustees are directly contradicting the University’s values. “DePauw says that they support women and people of color, stand with DACA status students, and advocate for institutions of higher learning,” the petition states.

“The values DePauw says we hold are counter to what we put into politics,” Houghtalen said.

Collis said the goal of the project was twofold, saying, “It’s disseminating information to the student body, ‘This is who your DePauw Board of Trustees are promoting’.” Collis is also hopeful they will get a formal response from the board.

Collis said she understands that the petition looks “like a group of left-leaning students who want to stop donations to Republicans,” but stressed that the focus is placed on supported policy over political party.

Originally, the group thought it would take a week to maybe get 100 signatures, but by the end of the day on Monday they had already reached over 100.

The project has been met with mixed responses from the student body with some posters being ripped down and one being written on.

President Mark McCoy said of the petition and flyers that “it’s good to be politically aware. I think that’s a part of being an intelligent citizen.”

He did comment that it is difficult to agree with a politician on everything they stand for, and that it is important for individuals to keep that in mind when looking at politicians and political contributions.

“I would hate to think that we were personally attacking anyone,” President McCoy said. “I would just hesitate to ever turn on our supporters.”

President McCoy said it is possible to to have a Board of Trustees meeting where students could express concerns in the future. The Board meets three times a year,  twice on campus in October and May, and once at a retreat in Florida during the month of February.

As of now, the group has not decided how long they will continue this campaign, but aims to eventually get a statement from the Board about the matter and hopefully announcing a suspension in political donations.

Collis believes that as long as there is support, the campaign will probably continue through the duration of their senior year in some way.