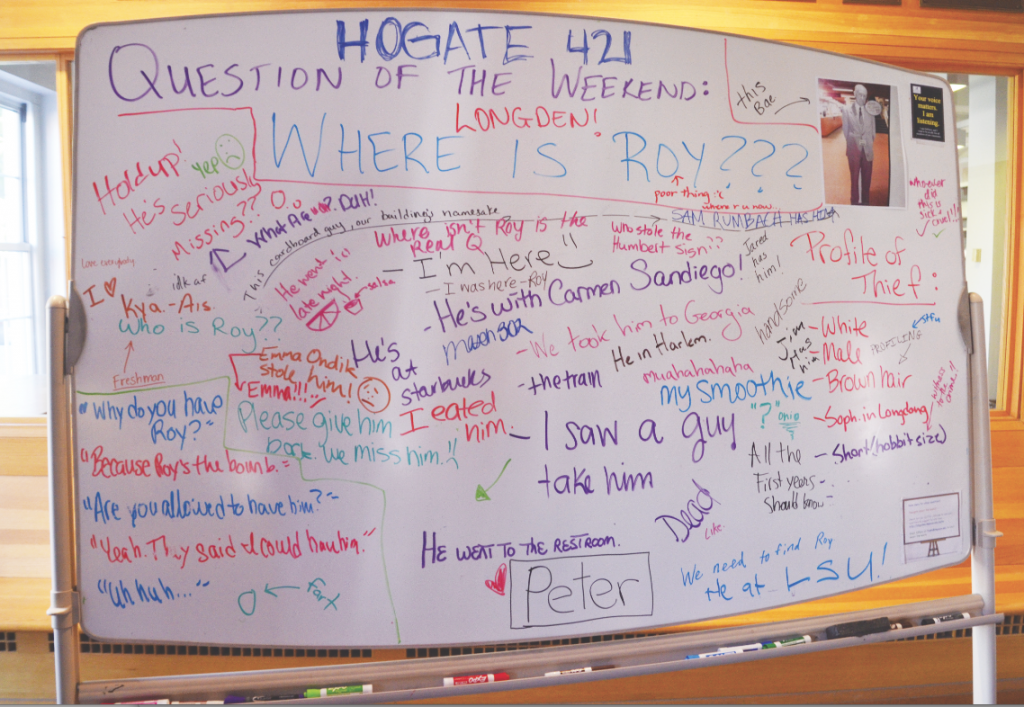 Students contribute to the campus-wide chatter
concerning the wherabouts of the stolen “Roy” cutout.
CHRISTA SCHROEDEL / THE DEPAUW

On Wednesday, Sept. 18, at approximately 9:30 p.m. the Roy O. West cutout of the eponymous donor was taken from the library.

“Roy has been in the library his whole life. We had to liberate him so he could live his life on the outside," first-year Joe Gallagher said.

Though most of campus knows the Roy O. West cutout was taken, many may not know the man behind the crime. The culprit is first-yaer Joe Gallagher.

“Yes I had initially stolen Roy,” Gallagher admitted. “It was all for comedic value. Me and my friend wanted it for giggles.”

However not all students found the comedic value in such a well-known item from campus getting stolen.

“I think that maybe there is a limit to having fun,” senior Susana Castro said.

Who stole Roy wasn’t the only question buzzing around campus, but also how did the culprit get away with it.

“I just noticed there wasn’t anyone there and I took it,” Gallagher said.

He was able to get all the way from Roy O. West to Longden without being seen.

“I ran into one girl, but I just told her that the librarian let me take it out of the library, and she believed me,” he said. “Also, other people saw me, but they didn’t say anything to me.”

Gallagher is no longer in possession of the Roy cutout; in fact it was stolen out of his room, leaving only a sticky note reading: “It has been fun but I have to go home now – <3 Roy.”

Gallagher stated that he had no intentions of returning Roy. If it wasn’t for the theft, he said,  he would have kept it most of the year.

So what could one do with a cutout of Roy? Well Gallagher and his friends simply hung out with Roy, introducing him to Gallagher’s hallmates and taking selfies.

He says his RA knew the whole time that he had Roy in his possession and chose not to turn him in. There is also a notorious snapchat story that got posted the night of the theft, which eventually led The DePauw to Gallagher.

Roy hasn’t been the only thing that has been taken from DePauw this year. All of the freshmen dorm signs have also been taken.

With theft being such a high problem on campus, it is unknown if Roy or the dorm signs will be seen again. Perhaps Roy is having a cup of coffee at Starbucks, or hanging out somewhere in Bum Alley.