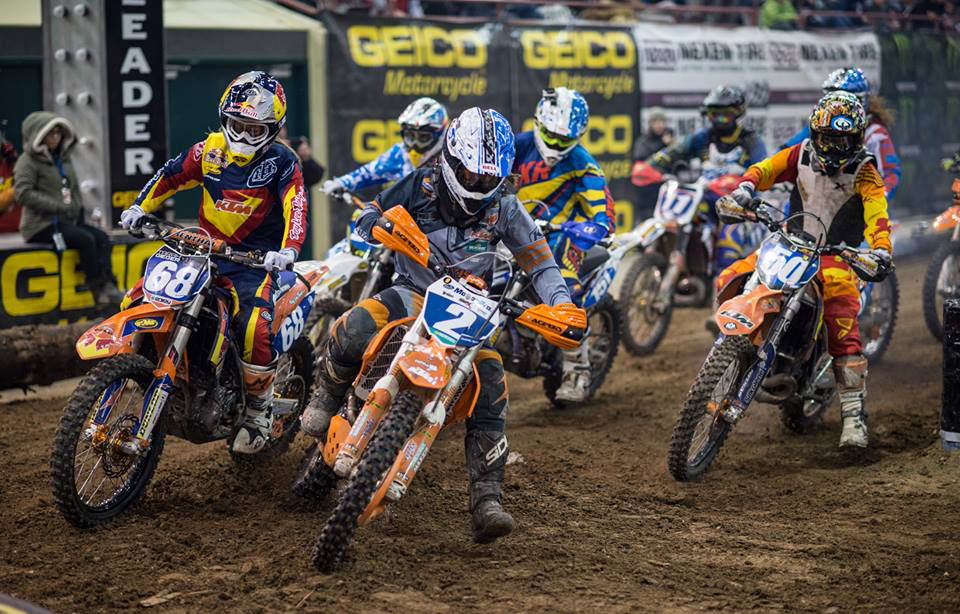 While most of DePauw University knows her as a phenomenal track athlete who currently holds the outdoor pole vault school record, she is seen as one of the top female Endurocross motorcyclists in the world.

Growing up around a father who enjoyed riding and racing, Gutish started riding at five years old, and by age seven, she had participated in her first race.

"I began competing at the pro level when I was 15,” Gutish said. “I do several types of racing, but my favorite, and what I specialize more in, is Endurocross.”

Endurocross is a series that primarily takes part on the West Coast, but has come to Indianapolis twice, which Gutish took part in. It was only a matter of time before Gutish started devoting more time to racing and making a name for herself. The reputation speaks for herself.

But let’s not forget about the talent that she displays at DePauw.

To refresh everyone’s memories, Gutish broke the school record in the pole vault at 11-2.25 (11 feet, 2.25 inches) during the Indiana Division III Championships at DePauw, only to shatter it a week later at the Rose-Hulman Twilight Meet at 11-9.75 (11 feet, 9.75 inches).

“She’s getting better, and works really hard at it,” head coach Kori Stroffregen said. “And that’s just who Rachel is. Everything she does she goes at 100%...She’s an outstanding student, a great athlete and obviously has this ‘hobby,’ for lack of a better term, of being one of the top female motorcross riders in…the world.”

“Rachel is a phenomenal athlete,” Krabill said. “She works harder than anyone else I know, and it shows. It’ll be interesting to hear about her and what she does over her career at DePauw.”

Rachel came to DePauw so she could continue her career in Endurocross while also pole vaulting for the track and field team, something she would not have been able to balance at any Division I school.

“They could have kicked me off the team or made my life miserable for missing, but they seem genuinely happy to have me when I’m around,” Gutish said of the Tiger coaches.

It’s fair to say that Gutish keeps busy throughout the school year.

“The racing does take up a lot of time—between being gone nearly every weekend, trying to go back home as much as I can to practice, and the extra workout time I put in on top of my track practices,” Gutish said. “I'm pretty much the only racer at Endurocross who does homework in the pits between the scheduled practice times.”

The team will be without Gutish at conference, where she will be off competing in, yes, you guessed it, another Endurocross race. This will be a bigger pill for Stroffregen to swallow, as Gutish won Indoor Conference earlier this year. Nevertheless, Stroffregen understands.

“It’s a very unique situation, and we’re okay with that,” Stroffregen said. “We knew...there’d be times when we would miss her.”

The future for Gutish will look just as, if not more, busy and challenging for Gutish, as she looks to take her skill set in Endurocross and pole vault to the next level, along with managing and balancing a DePauw education.