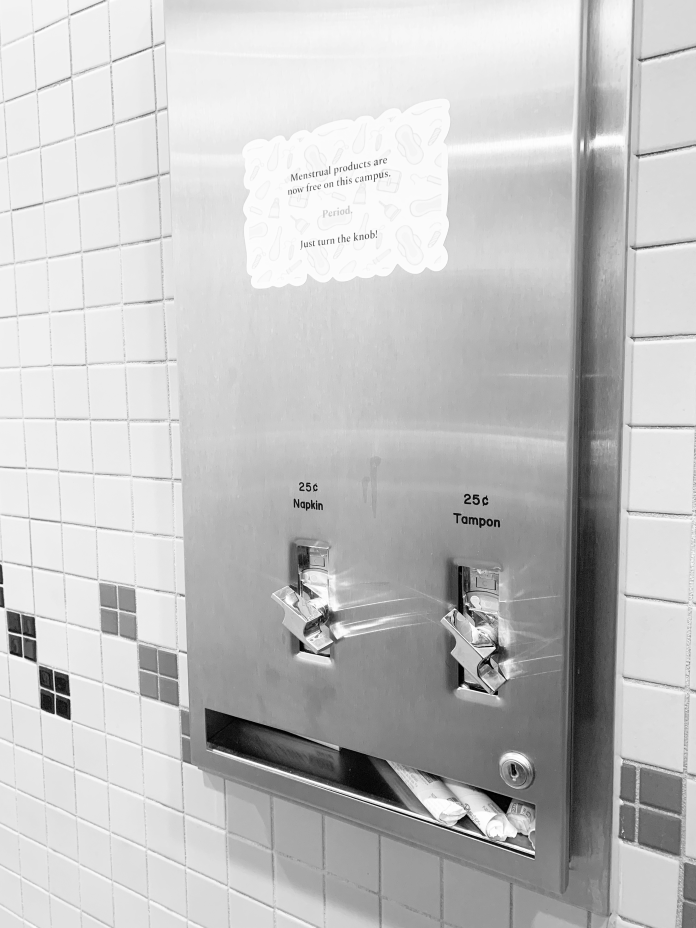 In the past, students and administrators had to pay to access period products in the dispensers of the women’s bathrooms. However, first-year Paige Burgess has successfully initiated access to free menstrual products across campus.

Before, free menstrual products were only provided by a few locations like the Women’s Center, CDI, and the Hartman Center.

There have been attempts in the past to target the issue, but none done systematically.

Sarah Ryan, women’s center director, said it was not something that DePauw has pursued as a priority.

It was not until Burgess, DePauw’s student government’s first-year senator, developed a resolution that would lead to campus wide change.

“I got up in the middle of the night, woke up from sleep, and wrote the whole idea,” said Burgess.

Burgess proposed the idea to the senate, but a few student members on DSG advised them to write a longer and stronger paper, rather than a resolution. Disregarding the advice, over the semester Burgess got into contact with Alan Hill, Facilities, and the Women’s Center to discuss the logistics ranging from the finances, if new dispensers were needed, and how it would be advertised.

“It’s part of a passion for equity in general. I am a genderqueer person, somebody who has periods. I understand how it is difficult to not have those products available to you. This is the first idea I’ve had at DSG to make a change that I felt I could do, so I just went for it,” said Burgess.

They asked their peers and found that the majority were in agreement with the proposition.

Sophomore Niesha Lewis said she had an experience where she did not have a quarter so the women she was meeting with gave her one of her own period products.

“If that situation were to ever happen to me again I would know where to go and I wouldn’t have to worry about having a stupid quarter on me to get rid of the situation, Lewis said. “ It was relieving seeing that those products are available to me and it takes away the anxiety of just being a woman. It makes me feel seen and valued and like somebody cares.”

While the locations where the menstrual products are held no longer require you to pay a quarter, there are still lingering issues.

President of HER Campus, Katherine Lenger said that the accessibility of the products needs to be addressed.

“They need to be in more places than just the women’s bathroom because more people get periods than just those that identify as women. I think it’s a great step for people who are experiencing poverty. I think that’s a great resource to have available for them. But I think it’s not just women. So those that have periods, it should be made accessible for everyone as well,” Lenger said.

To the latter, Burgess said, “Part of the next push is making gender neutral restrooms all over campus, which would include putting baskets of menstrual products and other kinds of sanitary needs.”

Because the change was implemented to the locations where there were dispensers, only the women's bathrooms have the free menstrual products as of right now.

“We made sure in our messaging that it was for people who have menstrual cycles,” Burgess said.

Another issue that is in the works of being addressed is the quality of the period products, mainly debating on the use of cardboard versus plastic applicators when and if using tampons.

Plastic applicators are more comfortable compared to the environmentally friendly ones that are made out of cardboard and the pads available are thicker than the majority of people use.

The hindrance is that the dispensers can only allow products in hard packaging to pass through the machine without getting stuck. Most period products are individually wrapped in a soft, paper-thin material which limits the options at student’s disposal.

With recent amendments to the strategic plan, these changes coincide with the goals pertaining to institutional equity and exemplary student experience.

Burgess said, “We just hired somebody for Institutional Equity, that’s a really big thing. Now that we have somebody who is representing our needs specifically, and we have this evidence that change can happen, people can start voicing their opinions. I think it’s a good step in the right direction.”