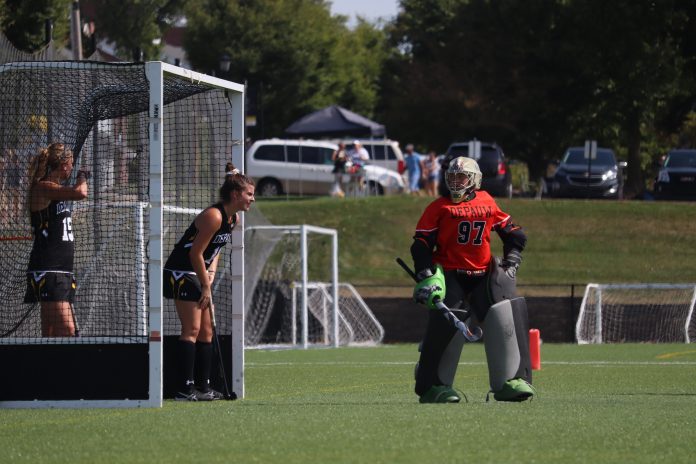 On Oct. 29, 2019, the Women’s Field Hockey team finished their regular season with a win against Earlham College 3-2.

The Quakers began strong, bringing the ball into DePauw’s defensive half almost immediately. Earlham crowded the circle and managed to score on the weak side of the goal, bringing their lead up 1-0 early in the first quarter.

Despite the Tigers attempts to fight back, the Quakers pushed through and scored once more. One minute into the second quarter, the Quakers were up 2-0.

The Tigers saw this as a challenge and brought the ball into the Quakers half. DePauw was awarded a penalty corner. Senior Kate Milner initiated the corner, passing to senior Maddi Little, who crossed the field and passed the ball to sophomore Maddie DeAscentis. DeAscentis passed straight back to Milner who brought DePauw’s score up by one. By the end of the second quarter, the score was 2-1.

Beginning in the second half, the Tigers were not on the defense anymore. Earlham attempted some early shots on goal, however DePauw goalie sophomore Allie Duranceau saved all three shots within thirty seconds.

Finally, getting the ball cleared up the field, DePauw was ready to strike and, once again, found itself slowing down the game with a penalty corner. Milner set up the play, but this time it was fielded by sophomore Sarah Goff who sent the ball to senior Alexa Steil. Steil scored and brought DePauw’s score up to two.

With the game tied 2-2, the Tigers began the final quarter by pushing the ball primarily in Earlham’s half. With over ten minutes to spare, DePauw midfielder and senior, Kelsey Doerr, passed to Milner who had forced her way into the circle and scored the winning goal.

With ten minutes left to play, the Tigers kept their momentum and preserved their score, ending the game with a win.

Of the game, Doerr said, “while we were taken aback by Earlham scoring not one, but two goals on us before we scored, I know we’re a team that likes to work under pressure. We’ve come back from deficits before, and we were confident we could come back again.”

Coach Lauren Thomas said the team’s ability to work together as a unit has improved. “We have our goalie and defenders working really well with our midfielders, and our midfielders connecting really well with our forwards,” Thomas said. “I have seen a noticeable difference in our team play with this improvement throughout the season and we look to continue this into next week.”

The DePauw Tigers advanced to 10-8 overall and 5-3 in the NCAC. After this win, DePauw secured a postseason tournament spot. Coach Thomas said, “I am extremely happy with how the team has performed throughout the season as we overcame a number of injuries, had progressed and gotten stronger in our team play throughout the season”

Of postseason, Milner said, “I think we are all more excited than anything else to be back in postseason play this year. Even though we are the lowest seed, we still have just as good of a chance as the other three teams in the tournament.”

Moving forward, the Tigers main goal is to stay focused. “We need to focus on staying healthy and competing at a high level and I feel we will be a force to be reckoned with for our semifinal game this coming Wednesday,” said Coach Thomas.