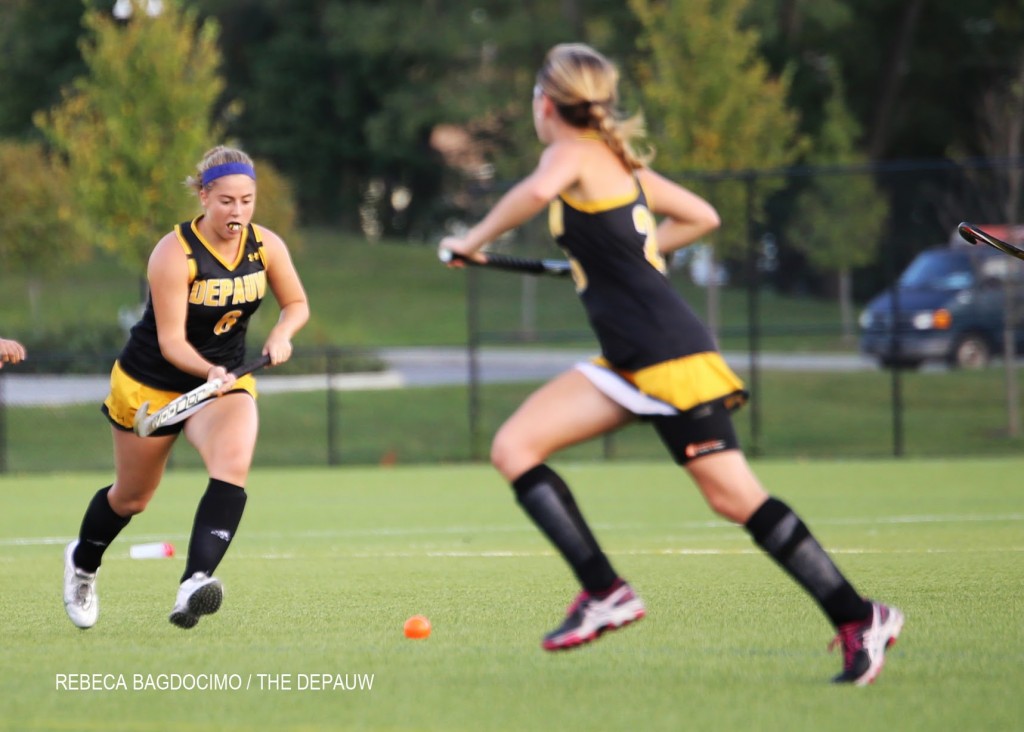 DePauw forward Paige Berliner (left) makes her way down the field. Berliner was the second of three to score for DePauw against Ohio Wesleyan on Saturday, Oct. 31 in Greencastle, Ind. REBECA BAGDOCIMO / THE DEPAUW

After struggling out of the gate to get above .500 in early September, DePauw field hockey (13-4, 12-2 NCAC) ended their regular season in a successful fashion with a 3-2 win over conference opponent Ohio-Wesleyan (8-11, 6-8 NCAC).

It was the Tigers' ninth win in their last 10 games, and came on senior day, which recognized forward Natalie Abbot and midfielder/forward Grace Goodbarn.

“Natalie and I are seniors, but we are also looking forward to post season play and making our senior season as successful as possible," said Goodbarn. "We want to make sure we leave a good impression on the DePauw field hockey program when we leave."

As for the two programs' offenses, all of DePauw and Ohio Wesleyan’s scoring would come in the first half of play.

Sophomore forward Riley Bruce opened the scoring six minutes into the game with her 14th goal of the season on an assist from senior midfielder/forward Grace Goodbarn, putting the Tigers ahead 1-0.

But Ohio Wesleyan evened the scores less than two minutes later with a goal from sophomore defender Paige Haenig.

After sophomore forward Paige Berliner put the Tigers back on top with her 18th goal of the season, the Battling Bishops had yet another answer for DePauw, as sophomore midfielder/forward Courtney Peterson scored with just under minutes to play.

“We had some miscommunication back in our defensive 25,” said Goodbarn. “We had to keep responding to goals instead of controlling the first half.”

But it was DePauw who carried the momentum into the second half, as the Tigers got their third goal of the game from first-year Sarah Pereya, who scored off a rebound for her first goal of the season.

Despite dominating Ohio Wesleyan offensively throughout the game with 17 shots on goal compared to the Battling Bishop’s two, DePauw wasn’t able to add on to their lead.

“We had a lot of opportunities on offense that we just weren't able to capitalize on which kept the scoring low,” explained Goodbarn.

Although the Tigers had previously beaten the Battling Bishops 5-2 in early October, Berliner was impressed with Ohio Wesleyan's efforts.

“I think Ohio Wesleyan came out stronger this game than they did when we previously played them,” said Berliner. “I think this game also showed what we need to work on to be ready for conference this week.”

Conference semi-finals will come this Wednesday when the Tigers will be hosting Denison (12-7).

With only two days to prepare, head coach Erika Dombkowski is not looking to make any significant changes over the course of this week.

"Right now, we're just focusing on what we can do, and focusing on having the most intense and positive practices," said Dombkowski. "We really aren't treating this game differently from any other conference game."

The Tigers have split the season series against the Big Red 1-1, but lost in their most recent matchup by a score of 2-1 in late October.