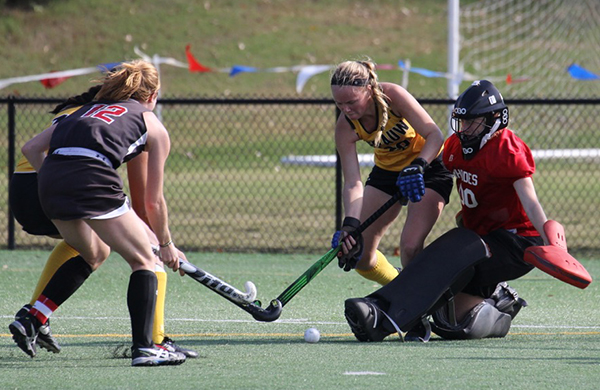 The road to a NCAA Division III title came to an unfortunate end for the Tigers this past Wednesday in their 5-1 loss to Rhodes College in the first round of the  tournament.

The efforts paid off for the Tigers as sophomore forward Paige Berliner was able to bury one in the 21st minute to bring the game to just a one goal deficit. Although they were down 2-1 heading into the second half, the Tigers were certainly not out.

But unlike the first half, the Tigers window of opportunity was shut very quickly in the second half. They were unable to convert on any of their scoring chances, which cost them big as they gave up three unanswered goals between the 52nd and 58th minute of the game.

The 5-1 deficit with under 15 minutes remaining in the game proved to be insurmountable for the Tigers, as they were eliminated from the tournament.

Although a loss like this so early in the tournament was devastating, a promising future lies ahead for the DePauw field hockey program.

The Tigers finished the 2015 season atop the NCAC conference standings with a record of 15-5, and qualified for the NCAA tournament for the fourth straight year.

“We have a very strong and also young team, as we are graduating just two seniors,” said junior midfielder and defender Sofia Carretero. “Working hard during the spring season will help us further improve our skills and I am excited to see what we will accomplish in the future.”

Head coach Erika Dombkowski agreed, stressing that this year was the beginning of something special.

“There is a lot of greatness ahead, and I think the team is ready to get to work.”