Allegations surrounding a man with a knife walking around DePauw’s campus on Saturday, Sept. 11 are false, according to Charlene Shrewsbury, DePauw Public Safety chief of police.

“By the time that [DePauw Police] were notified that there was concern of a suspicious person, it was about 15 minutes after the fact. An officer did a thorough mobile and foot patrol of campus including that specific area. He talked to a few students who were out in the area of where the person was seen. We reviewed camera footage, and we did not see a knife in the subject's hand,” Shrewsbury said.

Rumors surrounding “knife guy” raced around campus on Saturday night after students in university housing were instructed to shelter in place by several residential assistants (RAs) at around 11:22 p.m.

“Please tell your residents to stay inside. DePauw Police just told me they had officers looking for a man walking around campus with a knife,” Caleb Wiggins, an RA in Lucy Rowland Hall, messaged other RAs.

Shrewsbury denies speaking to a residential assistant or any student representative in housing and residential life. “We did not send a message to an RA. If we are going to send information about a suspicious armed person, or if we think that any person on campus is in imminent danger, we will send a RAVE message,” she said.

Further word about the alleged man with a knife spread throughout campus via comments from the anonymous, location-based app Yik Yak. 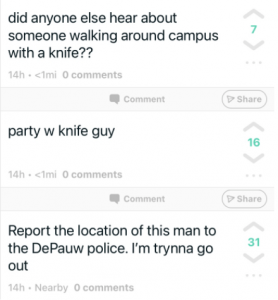 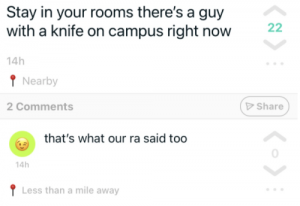 To combat future rumors, Shrewsbury urges students to contact DePauw Police for confirmation of concerns before sharing information with additional people. “I would much rather our dispatch be overwhelmed with calls than listening to rumors.”