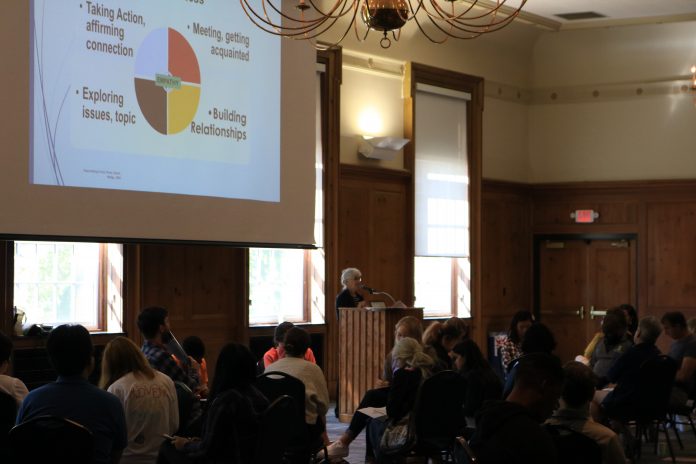 On Sept. 13, DePauw Student Government (DSG) announced in a press release that this year DePauw Dialogue is “taking a grassroots approach.”

In previous years, DePauw Dialogue has  consisted of a keynote speaker addressing the student body, followed by small breakout sessions. This year, the keynote address will be given by members of the DePauw community, rather than an outside speaker.

The motivation behind this decision was twofold: to center the DePauw community and its voice, and to save money. This year the budget for the keynote speaker started at $27,000 according to Summer, funds that are now instead being used to compensate student facilitators.

DSG announced Wednesday, Sept. 11 that student facilitators will be paid.

However, aiming for at least 100 facilitators, the committee has struggled to find participants. Facilitators are required to attend circle training from 9:30 a.m. to 5:30 p.m. Saturday, Sept. 14 as well as a manage groups of 20-30 people in sessions on the actual day.

DePauw Dialogue Planning Committee member, Joseph Heithaus, professor of English writing, said a part of the challenge is that students are only on campus for just over a month before the Day of Dialogue.

“In the past, the full-time staff, who were here all year, were given a lot more responsibility,” Heithaus said, “but because Christian and Summer are trying to get the students at the center…we're packing a lot in here right beforehand.”

This is the fifth year of DePauw Dialogue, known also as Day of Dialogue and Day of Inclusion. The only thing that has been consistent about the program’s effort to promote campus-wide dialogue, has been the controversy it's caused.

This year, a main point of controversy has been the lack of information. Until the press release, many students, like sophomore Reyna Wilson, have had little-to-no idea of what to expect going into Sept. 25.

“I’ve just heard that it's changing,” Wilson said, “and I’ve tried to ask how, but every single time I asked how everyone’s like, ‘Oh, I don’t know.’”

Heithaus is confident  Summer and Christian’s leadership will make not only the day a success, but the days following..

“Day of Dialogue has always been ideally a place that begins a conversation,” Heithaus said. “I don’t think it's always succeeded at that, but I think Christian and Summer have really sort of put their money where their mouth is in terms of this isn’t just a single day of talking. This is a day to begin to try to find ways to make our community better, safer, more inclusive.”