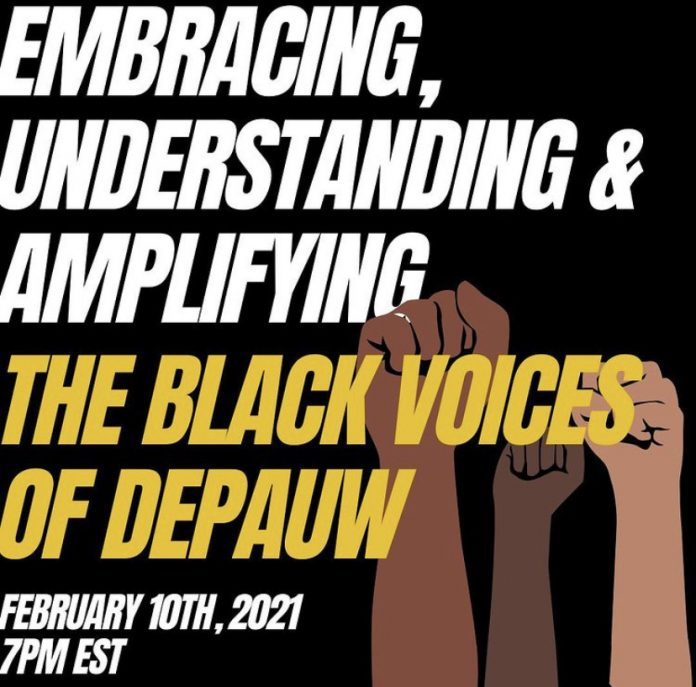 To kick off Black History Month, alumni held a zoom panel discussion on Wednesday, Feb. 10 entitled “Embracing, Understanding & Amplifying the Black Voices of DePauw,” about their experiences and current civil rights movements. This discussion follows the incidents in 2020 that made people think deeply about Black people’s justice and freedom.

The panelists included Beatrice Kemp ’71, principal for B. Kemp Interiors and one of the founders of DePauw’s Association for African American Students; Jennifer Enders ’02, global client manager for American Express; Charlie Shivers III ’03, senior defense analyst at the US Government Accountability Office; Lauren Clark ’11, comedian and founder of the Black Creator Connection and junior D’Angelo McDade, current DePauw student body president. President White also made a surprise guest appearance toward the end of the discussion.

When alumni reflected on their experience at DePauw, they recounted the difficulties they faced as minority students.

“I came to DePauw from Chicago, surrounded by people that look like me, talk like me, walk like me, and everything else,” McDade said. “Coming to DePauw was beyond a sense of culture shock because every which way you turn, someone doesn’t like the way you look.”

McDade described his first-year experience, saying that someone wrote “N-words don’t belong” within his hall.

“In that space, I thought to myself, DePauw is supposed to be the strong institution that backs who I am, that loves me, embraces me, not only academically but socially and emotionally,” McDade said. “Sadly, I thought that stopped within the year of 2019, but evidently, it didn’t.”

AAAS was established through the help of Kemp in 1968. Kemp and her fellow Black peers realized that building a supportive community would help African American students feel more comfortable.

Kemp was one of eight Black students at DePauw. “There was great trauma, but there was also great benefit,” Kemp said.

Black students who came after Kemp felt grateful for her legacy. Enders told the panelists that organizations such as AAAS made her feel “a real sense of community.”

Enders described the difficulty of getting a job the year she graduated because no one seemed to be hiring. As a result, her plan of pursuing nonprofit organizations with her music business degree was forced to change-- instead she pursued sales, an occupation she never imagined. Enders attributed her time at DePauw for giving her the skills necessary to overcome hardship, which has helped her at crucial parts of her life.

“The liberal arts education at DePauw built my muscles to be able to step into an environment that was not my plan A and still be able to execute and succeed,” Enders said.

Shivers III also made an effort to make DePauw’s campus a more comfortable place in other ways. He had a passion for speaking out through The DePauw to expose racial discrimination for those who couldn’t.

After discussing their experiences at DePauw, the panelists addressed topics regarding the current state of Black Americans on campus as well as throughout the country.

According to the panelists, dialogue is pivotal for allies to continue to better the experiences of not only Black students but other minority groups. They also emphasized that allies do not need to hold leadership positions in order to participate in the causes.

Clark highlighted that people need to take action based on their conscience. They can start by listening to the voices of people of color and move on to educating themselves.

A question was raised about how students can transfer what they've learned from 2020 into the classroom. In response to this, Clark stated that 2020 was a transformative year for her. When everything happened with Breonna Taylor and George Floyd, it really magnified the need for her to stop focusing on just herself. She emphasized the need to figure out how people can help each other.

“[2020] taught me that...if I’m not sharing my unapologetic Black self, I’m leaving other people in Hell,” Clark said. “If you have a pulse, you have a purpose and it’s your responsibility to figure out what that is.”

Kemp pointed out that the circumstances for Black students have not changed much even 50 years since she graduated. However, she still believes DePauw is a place where students are able to explain their need to feel at home, as other students do.

“We have to also remember that what is happening at the society at large is always reflected on our college campuses. This has been a difficult time in our nation. I understand that I have a debt to pay,” Kemp said.

Kemp adds that what is happening in our campus is a reflection of our society. Taking action to better our campus will in turn comfort minority students.

“Probably the best thing that has happened to DePauw is Dr. White,” Kemp said. “I feel welcomed because she's there.”

President White appealed that she cannot make the institution better without students’ cooperation. People related to DePauw, including Dr. White, students, alumni, and faculty must put effort into making DePauw a comfortable place for all races.

“If we want to make DePauw the place that we imagine it and desire it to be, it’s going to take all of us to come together,” Dr. White said.