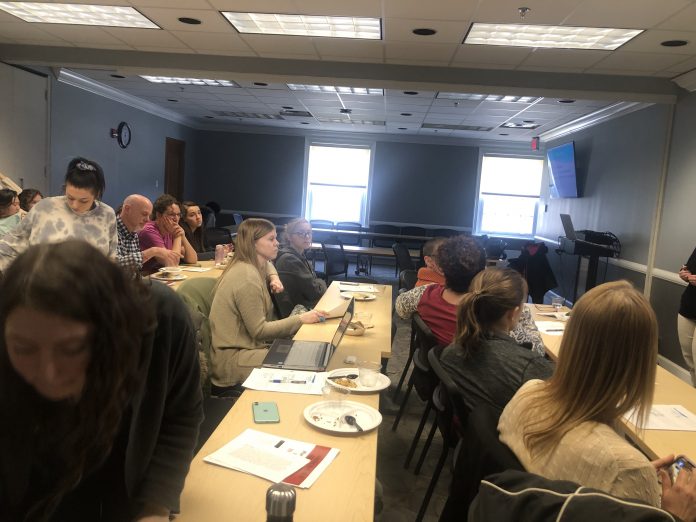 Mellisa Holtzman is a Professor of Sociology at Ball State University and the co-creator of Elemental, a sexual assault protection program that combines primary prevention educational programming with physical and verbal risk reduction training. Since implementing the program, Dr. Holtzman has been invited to do a TEDx talk and invited to the White house. She visited DePauw last Thursday to give a clinic.

Holzman started off the presentation explaining that self-defense was an unpopular way to be used against sexual assault incidents in the last decade. The victims were often blamed, not supported, placing the burden on the victim rather than empowering them.

Restraining a victim’s options to only using words in an assault-situation also limits their ability to remove themselves from a situation. The ideology was that self-defense does not promote a cultural shift in mindset that sexual assault should not be happening in the first place.

Since the early 2000’s, however, primary prevention has reached greater prevalence. Holztman discuessed how Elemental was one of its kind that addressed settings that other self-defense training programs might not take into account, such as the underlying assumption that sexual assault attempts are made by strangers.

“We were initially hesitant, for the most part to because when you hear self-defense and sexual assault, it brings a lot of negative connotations but the way Doctor Holtzman taught it conceptualized it onto a campus climate,” Dickinson said.

Holtzman’s primary takeaway was that not a lot of college campuses are ‘Jumping the Bandwagon’ but resistance is starting to crumble as more people change their bias towards sexual assault prevention.

“At the end of the day, we want campuses to find a way to be able to blend primary prevention with flexible nuanced risk reduction. Campuses can do this on their own too to design these programs or they could adopt a program that already exists,” Holtzman said.

Sarah Ryan, the Women’s Center Director, was intrigued by the talk and its impact on multiple identities on campus.

“We must adopt a Multi-fascident approach to sexual assault on campus and I am  intrigued by Elemental because it is contextualised for a college campus, inclusive of all genders and sexual orientation. It is also aimed at scenarios that college students are often in,” Ryan said.

DSG Vice President, Christian Rodriguez ‘20,, who attended the talk, said, “hearing Holzman’s approach on preventative measures really did change my mind about the ideas surrounding self-defense and I feel like more people need to hear it to change their perception.”