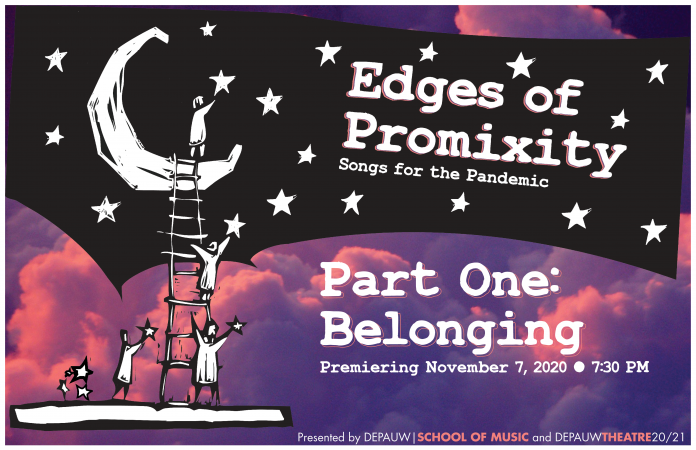 During the time of pandemic uncertainty, the DePauw Theater and School of Music joined forces to create a three-part virtual musical, “Edges of Proximity: Songs for the Pandemic” – the first part “Belonging” premiered on YouTube on the DePauw Music page on Saturday, Nov.  7.

For a first-time musical goer, this musical was obviously unlike any other. Still, the staff and cast still were able to put together a well-rehearsed play that discussed serious topics in a light-hearted manner. Although the actors were spread out across the country, it still felt very interlinked. This might have been a virtual musical on YouTube, but it still felt as if you were watching from the crowd.

The students helped pick out two song cycles which Steven Linville, director of productions at DePauw and Tim Good, the show director then curated to create a loose story arc between each individual section.

“It’s reflecting the uncertainness of dealing with the pandemic and yet trying to offer some hope and point out the strengths we have when we seek connection,” Good said.

The students were given a certain sense of creative freedom in the production of their characters. The sets were the actors’ rooms and there were no costumes, as it was all virtual. This being said, the cast did a great job at giving us the ‘authentic’ feeling of a musical.

“We created characters for ourselves and played those characters throughout our pieces within the musical, which allowed us to tap into our creativity in a way many of us hadn’t before in musical productions,” senior Jesse Fromme said.

The cast was impressive in the creation and performance of their characters which added another layer to the performance. The everyday surroundings provided a sense of heightened reality where the characters were locked down at home, the common experience for all of us during pandemic times.

“Belonging” is split into five different sections in which the actors sing about experiences like accidentally killing a gerbil or using the “elbow technique” to open a door. From a musical perspective, the songs and monologues evoked a range of emotions. The musical opens with a rowsing ensemble performance which creates an upbeat tempo. Later in the musical, more somber performances temper the musical. Senior Amalia Crevani addressed the audience directly as she prepared herself to go out on a date, questioning her motives and looking to us for answers.

Each section had its own unique tone. One of the most enjoyable parts was when sophomore Piper Nacke told viewers about her experience accidentally killing her third-grade gerbil. It was funny and presented an important life lesson that life goes on and everything will be okay.

“This musical is important because it is allowing continuous engagement for both the performers and the audience,” Fromme said. “Projects like this allow everyone to participate in some fashion and feel included in these times unique to our generation.”

Most of the parts were solos, though, the editors created a few duets by cutting the camera between the actors singing.

Junior Abby Brodnick did one of the only duets in this musical. The virtual rehearsals for this duet brought Brodnick a sense of normalcy. “It’s easy to feel very alone during this time of rehearsal and theater is such a community activity, so it’s been a fun challenge,” Brodnick said.

The first part “Belonging” is 30 minutes long. While this  would be a good musical for anyone, someone going through a tough time would probably get more from it, as it brings clarity to uncertainty in a fun and comedic fashion. While the pandemic puts distance between all of us, this musical is one step to bringing people together.