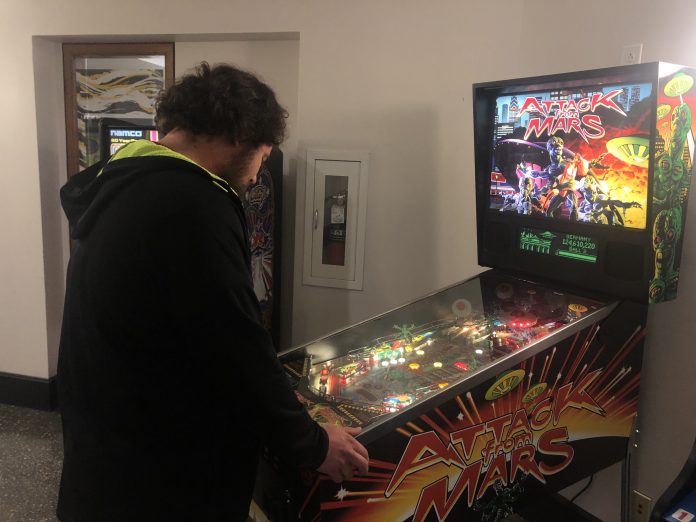 On Tuesday, Oct. 29, 15 students gathered in the UB ballroom for a DePauw Student Government (DSG) town hall meeting to discuss ideas for a new student space.

The purpose of this group-discussion was to brainstorm students’ needs and wants for this space, and is only the beginning phase of the process. Student body Vice President Christian Rodriguez Hernandez hopes for this space to be a “dynamic and changing space so that it meets the needs of students on campus.”

The poster advertising the meeting on Instagram read: “DSG sees a need on campus for a new hub of social life, something low-key, casual, community regulated, and student-led and run. This would be a place for org [organization] programming as well as partying at night. What do y’all think?”

DePauw’s policy that registered events in university-owned housing may not exceed 35 people was given by DSG as one reason why this party space would be beneficial to students.

DSG President Summer Pappachen and Rodriguez posed several questions throughout the hour-long conversation: should this space be new or repurposed; what should these spaces look like; what are current spaces that could be adopted for this purpose.

This is a project that Pappachen and Rodriguez have been thinking about since the start of their term.

“I think there is very much a need for a programming space,” Rodriguez said.

The Den, which was closed prior to the fall of 2017, was discussed as a model of what the students present wanted the space to feel like.

“We need a space that is fresh and our own,” said senior Austin Lewis said during the discussion.

Pappachen and Rodriguez presented the idea of building and using a pole barn. The estimates they have received range between $60,000-2 million dollars.

Several students highlighted that the timeline of fund-raising, building and opening this student-led hangout space could potentially have a timeline of 5-10 years. In the meantime, the students who attended the meeting brainstormed potential existing spaces to repurpose.

Junior Shriyanshi Shikha highlighted that with DePauw Fraternity and Sorority Life (FSL) numbers falling to 63%, there is an increasing need for alternative student spaces. Shikkha complained that not being a part of FSL limits her options for spaces to “have a chill night and meet new people,” unless she wants to go to the UB or a frat.

Another independent student echoed the need for a non-FSL gathering space by saying, “now they [DePauw] need to pay attention to us.”

Other student organizations and the greek organizations that are a part of National Pan-Hellenic Council (NPHC) and Multicultural Greek Council (MGC) would also benefit from this space, as their registered parties are limited to 35 people.

After discussing for an hour, students almost unanimously agreed that their long-term goal is for a new space to be created. Shikha said, “We need more options.”