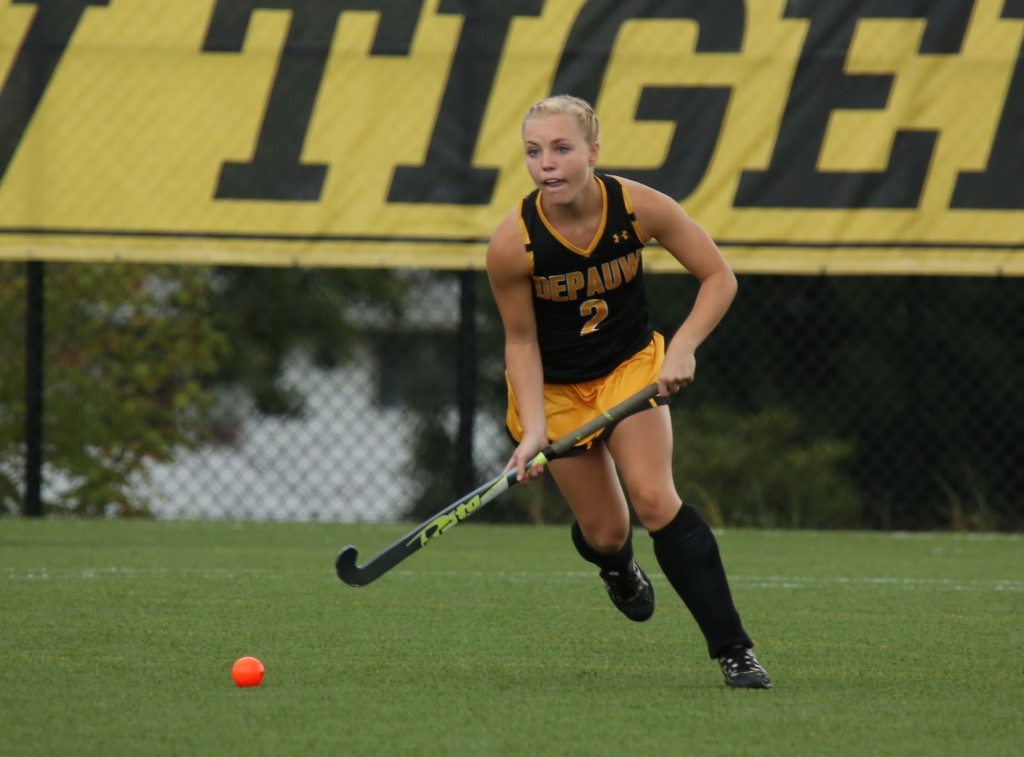 Junior Annie Wyman looks down the field during
the Tiger's game against Wittenberg, Friday
(PHOTO COURTESY  OF DEPAUW UNIVERSITY)

DePauw began play with the end in mind this weekend.

The Tigers opened up conference play at home Friday against Wittenberg, followed by a match against undefeated Rhodes College. While the team only earned a split, the weekend proved to be pivotal in showing where the program needs to be in preparation for the postseason.

“Conference is where we want to be come November, so we need to think that the end of the season starts now and capitalize on it,” explained head coach Erika Dombkowski.

DePauw’s match against Wittenberg was similar to last season’s result, which entailed a lot of Tiger offense.

DePauw dominated during the first half, getting goals from senior midfielder/forward Grace Goodbarn and sophomore forward Reilly Bruce to put DePauw up 2-0.

Wittenberg threatened the lead twice during the second half, bringing the deficit to as close as one after Wittenberg’s Andrea Mattingly netted a goal to make it only a 3-2 DePauw lead.

But with late insurance goals from junior midfielder/defender Sofia Carretero and Goodbarn, the Tigers were able to pull away with a 5-2 victory.

“We came out strong and with high intensity,” said Carretero. “We had a few defensive breakdowns but overall played really well together and connected passes effectively.”

The Tigers knew Sunday’s non-conference game would be challenging, as Rhodes came in with a 3-1 record.

DePauw struck first with a goal from Berliner, but it would be all Rhodes the rest of the game as the Lynx came back with four unanswered goals, propelling them to a 4-1 win.

“I think we had a hard time working as a unit and getting into the flow of our own play, said Carretero. “Our team had a lot of opportunities and struggled with capitalizing."

“We need to take risks and play with confidence and without hesitation,” said Dombkowski. “When we hesitate, we become defensive.”

DePauw tallied nine shots throughout the game, five of which were on goal compared to Rhodes’ eight.

Despite the disappointing finish, the Tigers can’t dwell on Sunday’s match, as the team has an opportunity to make a dent in the conference standings with games against Wooster and Oberlin next weekend, two conference programs DePauw easily shut out last season.

“Other teams know how good we are… we are the team to beat,” said Dombkowski. “We need to keep calm, play our game and have other teams react to what we are doing, not the other way around.”