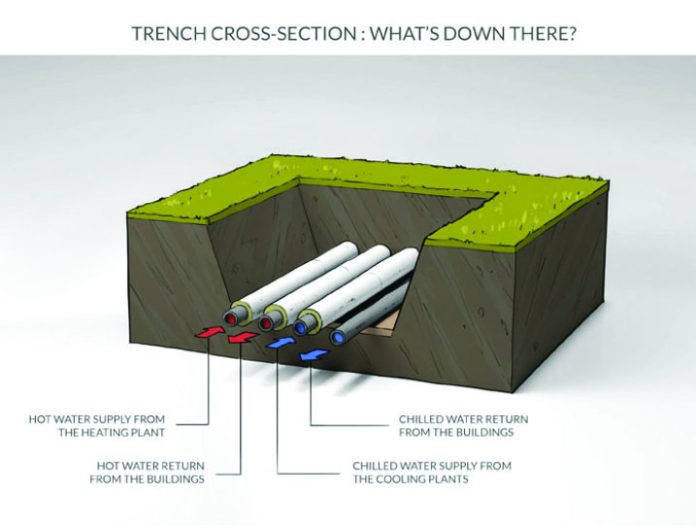 The Campus Energy Master Plan, introduced in 2017, decreased campus energy usage by 33% and saved nearly $800,000 in the process, creating a more sustainable campus environment for students and staff.

“Our Campus Energy Master Plan (CEMP) formally began in December 2016 as DePauw was actively seeking a partner to perform engineering design and construction services for CEMP project scope. Our CEMP partner, Ecosystem, was chosen and design work began in March 2017. Actual construction work started in May 2018 and the entire project was completed in March 2021,” Hoffa said.

He said that the pandemic, as well as supply chain issues, had no effect on the project since all of the material and equipment procurement happened in advance of COVID-19. The human resource issues induced by the pandemic and economic inflation began after the completion of the plan. The timing of significant social and economic issues certainly worked in favor of completing the project with the original timing and budget.

However, there were still some other hurdles that facilities had to overcome.

“There were many difficult negotiating sessions on such issues between DePauw and Ecosystem to better balance the project's outcome between all of the important considerations beyond just energy savings,” Hoffa said. “An example of one of these difficult issues was surrounding the selection of the underground pipe material specification to be used for our campus hot water and chilled water distribution piping system.”

He said that another unexpected issue was dealing with the roof design of the Indoor Tennis and Track Complex. The roof structure had to be modified to support the designed photovoltaic array inside of the facility, which took a few months longer than the original schedule.

Since the plan has been completed, Hoffa has begun to take further steps to create a more sustainable campus environment.

“I am just beginning work on a proposed Phase II CEMP for the university that will focus on further energy savings, campus resilience, and renewable energy sources.  This plan will likely take a year or so to develop and secure funding,” Hoffa said.

So far, the Campus Energy Masterplan has produced approximately $780,000 in savings through electricity and natural gas costs according to Chris Hoffa.

“This savings amount will either act to reduce our operating draw on our DePauw endowment, making DePauw more financially sound or it will be reallocated to other needed programs across campus. This decision will be proposed annually by our Finance team and approved by our DePauw Board of Directors,” Hoffa said.

Facilities is adamant about making the campus more sustainable, but there is always more work to be done.

Jeanette Pope, associate professor of geosciences at DePauw, said that “while CEMP is an incredible accomplishment, we still have a long way to go to meet our goal of carbon neutrality (no net greenhouse gas emissions).”

She said that a lot of investments made through the Campus Energy Masterplan, like the energy distribution system and “smart” controls (computer-enabled monitoring and programing of building heating and cooling), put the University in a much better position to make progress compared to five years ago.

“What I would really like to see, though, is students speaking out more about their passion and concern for sustainability issues.  For those who don’t know about it, SLP - the Sustainability Leadership Program is a really awesome way to get involved, learn more, and show your commitment,” Pope said.

Jennifer Everet, associate professor of philosophy and Environmental Fellows co-director said that she would like to see the campus go carbon neutral immediately, but she is extremely appreciative of the steps facilities have taken to create a more sustainable environment.

“Students often don't know what's going on behind the scenes,” Everet said, in regards to communication with facilities and students. She said that facilities lost a large amount of staff a few years back, and it’s been harder to advertise and communicate information to the students, but they still email updates a lot of the time.

Alongside being understanding towards facilities management, she encourages students to become more involved in campus sustainability.

“I would like to see students have climate strikes. You guys have a lot more power than you think you have. So if you were noisier and more disobedient and more demanding, I think that can move things along, but you've got to be willing to take some risks,” Everet said.

She said that students on other campuses are beginning to take sustainability into their own hands by pushing for disinvestments from fossil fuels from their own universities endowments, and she would like to see DePauw’s students do the same.

“The Sustainability Office  is making big things happen, and could do a lot more if  [students] wanted to be part of it,” Everet said.