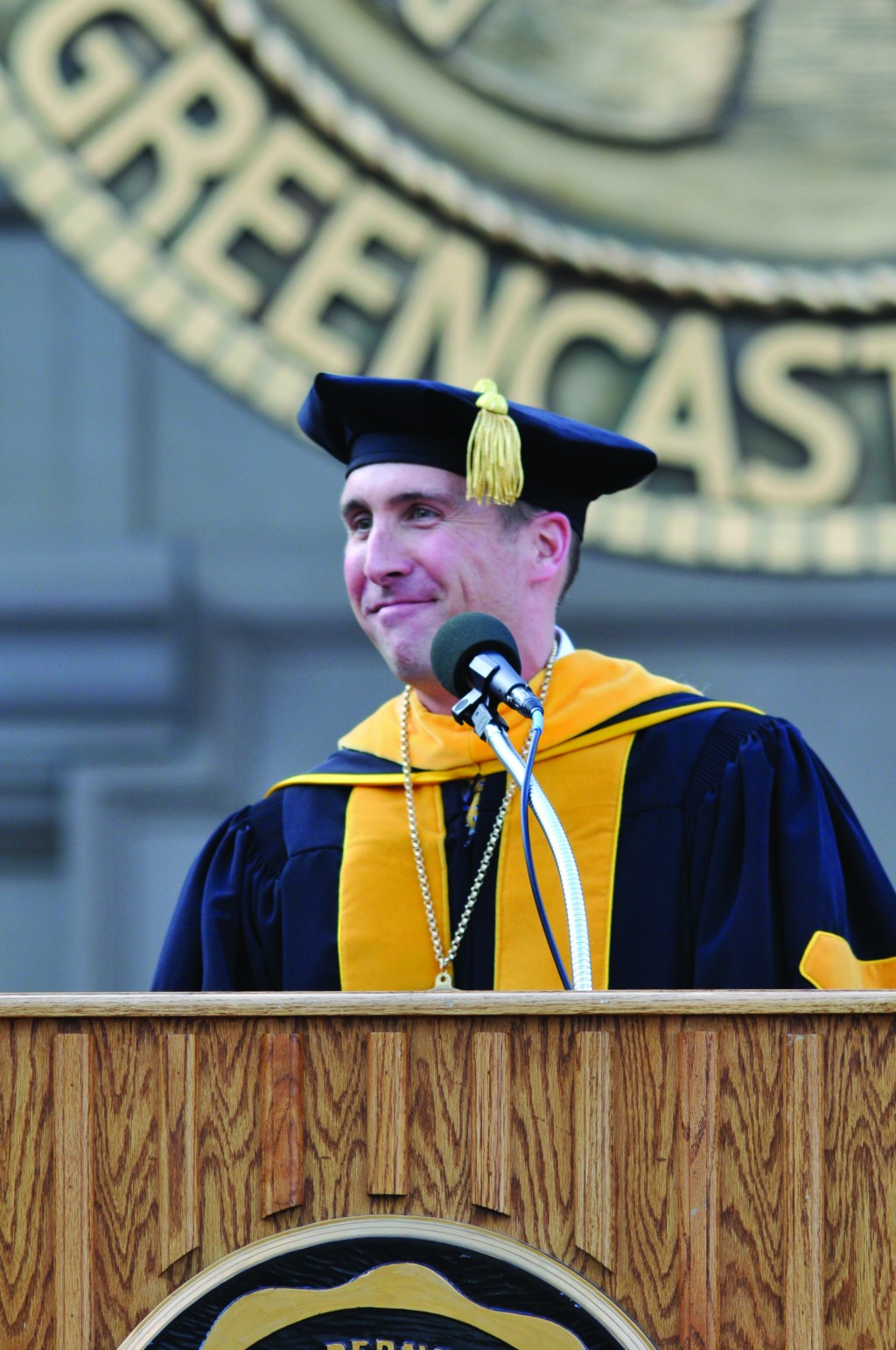 This spring, as the class of 2016 begins a new chapter of their lives, so too will university President Brian Casey.

Casey, his dog Emrys and his 16 suits will make the roughly 750 mile journey from Greencastle, Indiana to Hamilton, New York to be Colgate University’s 17th president.

“I’m either in a bathing suit or a suit suit,” Casey said.

For him, the suit is a symbol of how being president of an institution isn’t just a job.

“I’m actually representing the institution, even when I’m here and in some ways I’m dressing up to respect the position,” he said.

But Casey dresses the part even when not on campus.

“Whenever I go on an airplane, I always wear a suit because I have never in seven plus years been on a plane or an airport where some alum hasn’t come up to me,” he said. “It happened to me in LaGuardia Airport four days ago.”

People will sniff you out

This year intends be just as active in his efforts for DePauw as in other years of his term.

He plans to “really working on the inclusion plan with Renee Madison” and “really work with the faculty on these curriculum conversations.”

He sees the most important thing he can do as raise the endowment for student scholarships.

“I have a number of conversations that I’ve started with potentially important donors, and if there’s anything I want to leave for this institution, it is endowment for student scholarships because those gifts will last centuries,” Casey said. “They just assure you that students who want to come here can.”

For Casey, knowing the lasting impact that endowment for student scholarships will have is “clarifying.”

“I really appreciate Colgate letting me stay here for the year to do those things,” he said. “I can see given I have this year at DePauw, I can finish a lot of things I’ve started.”

To allow Casey the time to tie up the loose ends at DePauw, Jill Harsin will serve as Colgate’s interim president.

It is DePauw’s board of trustee’s goal to find Casey’s successor in time to not need an interim president.

“Colgate is incredibly fortunate to have attracted such an experienced, proven and nationally recognized leader as our 17th president,” said Colgate board chair Daniel B. Hurwitz in a press release on Colgate’s website.

Casey is looking forward to his time at Colgate.

His advice to his successor, which will be DePauw’s 20th president, is simple: Be yourself.

“I remember thinking that I needed to ape [other presidents’] behavior or, you know, copy them,” Casey said.

Prior to DePauw, Casey’s references for what a university president should look like came from presidents such as Ted Hesburgh from The University of Notre Dame, Derek Bok from Harvard University, John Hennessy from Stanford University and Ruth Simmons from Brown University.

“I learned really quickly that you have to be yourself,” Casey said. “You have to be the authentic version of you. If you try to be something else, people will sniff that out really fast, and you’ll have no authority.”

Casey has confidence that his successor will be “someone terrific” because of the strength of DePauw.

“To whoever comes in, I’m going to say: whatever you’re dreaming dream, whoever you are be you, that’s who you should be. Don’t try to be anybody else,” Casey said.

DePauw is immediately starting the search for the 20th president, with trustee Kathy Patterson Vrabeck ‘85, chairing the search committee.

The first step will be selecting the rest of the committee.

After that point, the committee will be soliciting information as to the qualities desired in DePauw’s next president.

Chair of the DePauw Board of Trustees Marshall Reavis, ‘84, like much of the community, was saddened by the news.

“But I’m not shocked,” Reavis said. “Most presidents last six and a half or seven years, and he will have been here for eight years at the end of the academic year. So, we’ve had him a little longer than the average, which we’re lucky for.”

Reavis knew this would be inevitable.

“At some point we were going to have a 20th president,” he said. “Maybe I would have preferred it be a couple years from now, but it is what it is.”

The goal is to find the right fit for DePauw and to build on what Casey has done so far.

“We’re DePauw people,” Reavis said. “We’re going to move on and build on what he’s done.”

I’ve had rumors about when I was going to leave since the day I started.

While Casey was not interested in leaving, he had toyed with the idea after seeing so many of the projects he started coming to an end.

“I turned 50 and I remember thinking that it could be time because I had done a lot of the work I had wanted to do here,” he said.

Then, at the beginning of the summer, he received a call from Colgate.

“It was a remarkably fast search,” Casey said.

By comparison, when he went through the process to become DePauw’s president, he met the search committee in October, but the search wasn’t over until February.

“This one just went a lot faster,” he said. “A lot of conversations in a very compacted period of time. So all of a sudden it was the summer and then I had to make a decision.”

With timing as a key reason, Casey said that “the most important thing for a president with an institution is fit.”

Casey also said that being closer to family was a consideration.

“It’s also close to home,” he said. “I grew up in that part of the country. I have family that live quite near there.”

The political landscape in Indiana played a small indirect factor in his decision.

“Last year was actually hard personally to watch the debates that were raging across the state,” he said. “I do think that moving more to the coast might allow me to have a different life.”

Casey, who is openly gay, remembers being concerned about moving from a liberal state to a more conservative one.

“What I found when I came to this community [was] a profoundly accepting community,” he said. “The students very quickly indicated that they could care less. They just never had an issue with it, nor did the board.”

Casey made the decision to accept the job offer in July and said discussions of going to Colgate did not occur prior to this summer.

“I’ve had rumors about when I was going to leave since the day I started,” Casey said.“My first year, I got that question almost constantly. When are you going to leave? I said I just got here.”

Money was not a factor.

“I mean, don’t get me wrong, these positions pay well. They just do,” he said. “But no, it just felt like it was time to start the next chapter.”

To Casey, money should not be a motivating factor for any college president due to the nature of the job. The wrong motivations can make the person unhappy quickly.

“These jobs are all encompassing,” Casey said. “It touches every aspect of your life. Twenty-four, seven is a cliche but it goes beyond 24/7. These positions affect where you live, how you live, how you spend your time, who your friends are. I have other people manage every minute of my day.”

I love DePauw. I always will.

Throughout his time at DePauw, Casey launched the university’s first capital campaign in almost 20 years. As of June, the campaign had raised $225 million of the $300 million goal. The endowment, or the financial assests donated to an institution, as a whole has increased 51 percent since 2009. The purpose is to invest the money and collect the interest to pay the bills of a university.

“I arrived in 2008, and the world was slipping into the great recession so the first two years were just really trying to get the institution through brutally challenging financial chapters,” Casey said. “My second year was when the economy just kept going down, so that was 2009-10, those were two of the hardest semesters I’ve ever experienced in my life.”

While being president during the stock market crash was a lowlight for Casey, the increase in faculty conversations is one of the highlights of his time at DePauw.

“When I came here, I thought that there was a faculty culture that didn’t promote deep conversation about important issues,” he said, “There was less planning conversations involving faculty and staff.”

Looking back, there are a million things that he wishes he could have done differently.

“I wish that I had either promoted or been more directly involved in an additional number of academic initiatives,” Casey said. “If I think about the first three or four years, so much of it was focused on finances that I wish I had spent more time during that period, maybe on the curriculum, maybe on faculty development, maybe on faculty life.”

However, with the financial success that has come under Casey, he says the university can focus on academic improvements.

“We’re now in a stronger financial position than at any point since I walked in the door,” he said. “That’s when you can really strengthen the academic side of the house, and I feel that’s going to hurt not seeing it.”

That’s not the only thing that has been hard about the decision to leave DePauw. He will miss the people the most and said that he would get emotional if he talked about that. At yesterday’s faculty institute, Casey cried when addressing the faculty.

However, one of the areas that will be hardest will be changing his opening convocation speech.

“A very sad moment will be at opening convocation I say ‘When you’re a senior I will read this charge to you,’ and I can’t say that to them.”

DePauw will always hold a special place in Casey’s heart. The day after the Aug. 13 announcement, Casey posted a photo of Anderson Street to his Instagram.

“I took this shot and knew I love DePauw,” he wrote on the post. “I always will.”