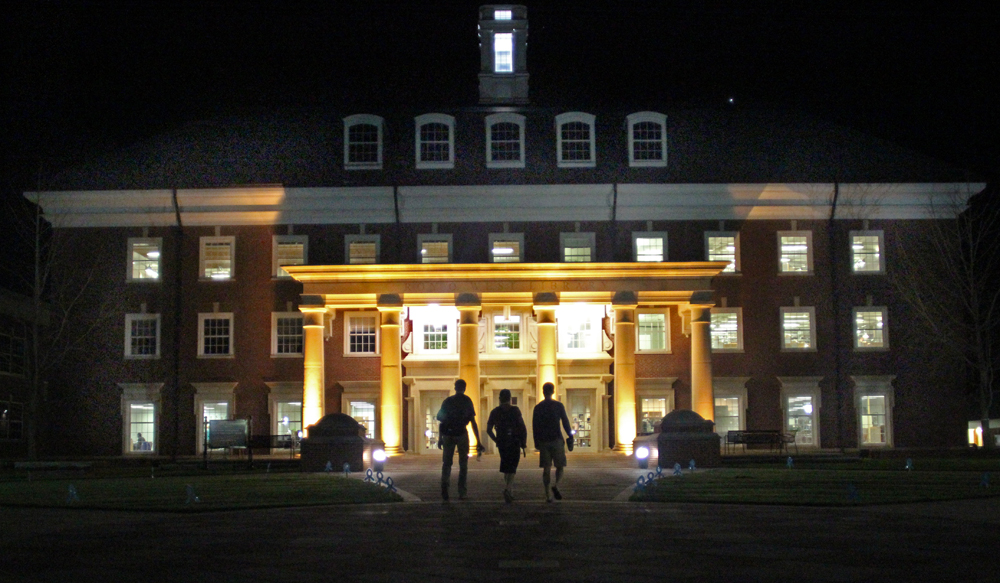 It’s nearly 2 a.m., and very few people are in Roy O. West Library. But the few students who are still up until the early hours of the morning will have to relocate once 2 a.m. rolls around.

“By large we have pretty close to the same hours we’ve had for the 15 years that I’ve been here,” Rick Provine, director of libraries, said. “We actually open earlier now than we used to because they make changes to time banks.”

Provine cited a time in which there was a 7:50 a.m. time bank for classes.

“We found that students and faculty both appreciate the opportunity to get into the library before going to their first class,” Provine said.

Provine said that among the Great Lakes Colleges Association (GLCA), a group of liberal arts colleges in the Great Lakes that includes several peer institutions such as Kenyon College, The College of Wooster, Denison University and Oberlin College, and the Oberlin group of libraries that includes the top 75 liberal arts colleges in the nation, DePauw’s library hours are comparable.

“We’re always towards the top of that group in terms of number of hours offered,” Provine said.

However, of the 13 GLCA schools, DePauw ranks seventh in total number of hours open per week at 111.5 hours. By comparison, Kenyon College, which ranks No. 1, is open for 115 hours per week.

Prior to this year, DePauw’s library was open until 10 p.m. on Saturdays. These added four hours would have placed DePauw as the GLCA school with the most library hours per week. Provine claimed that no one was there during that time.

Despite this middle of the pack ranking, Provine doesn’t believe that more hours are necessarily the answer.

“We’re open until 2 a.m. and we open at 7:30 [a.m.]. There’s such a small window of time that we’re not open,” Provine said. “Gate count show us people like the convenience of 24 hours service, yet it tends to not get used that heavily.”

He noted that there are other ways to measure and compare libraries.

“I feel like one of our priorities is the collection and making sure that we have good reference service so we’re able to help students and faculty use the resources that we have,” Provine said.

In addition, he noted that there are some spaces that are open 24 hours, such as the Pulliam Center for Contemporary Media and the Student Union Building.

“The idea that there’s nowhere to study between 2 a.m. and 7:30 a.m.,” Provine said. “I don’t think is really a problem on this campus. Some of the places that offer services [24 hours] tend to be urban campuses where safety really is an issue.”

Caroline Gilson, associate dean of libraries and coordinator of the Prevo Science Library, questions whether being open 24 hours is doing students a service.

“We want to be mindful of the health benefits of rest and relaxation and getting enough sleep,” Gilson said. “We hope to play a part in that by encouraging people to go home and go to bed and not pull three all-nighters in a row.”

Junior Casey Walker said that she doesn’t use the library to study often.

“I normally study in my room,” she said.

However, she does remember a time in which she was going to pull an all-nighter in the library with a friend.

"We were going to study together all night, but they came to kick us out,” Walker said. “By that point, the other academic buildings, which would have allowed us to study all night, were closed. We just went to bed.”

Provine said he wants to know if library hours are or are not meeting student needs and encourages students who feel strongly about it to reach out to him.