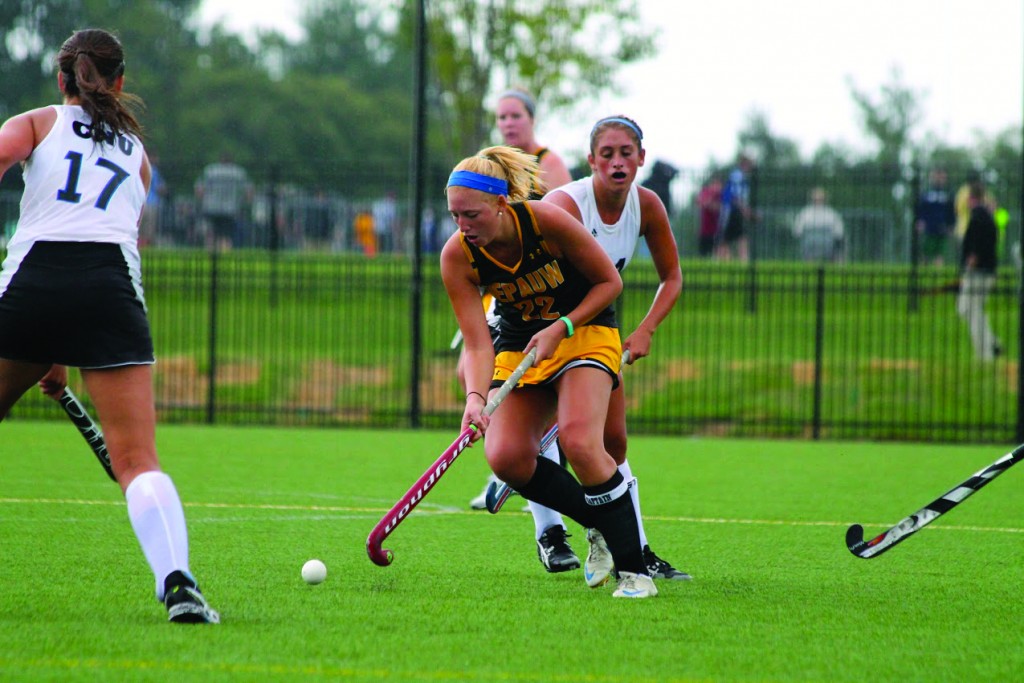 The DePauw University Tigers stepped onto their home turf Saturday at Reavis Stadium, hoping to upset Christopher Newport University, ranked fourth in the nation. The 20th ranked Tigers landed two goals in the back of the cage, marking their third win of the season with a 2-1 victory.

“We came out with ‘Let’s give it everything we have,’ and from the start of the first whistle we showed that we can compete,” senior forward Maggie Campbell said. “I think it’s a testament to the team. We’re not just a Midwest team, but we can compete nationwide.”

The Tigers started strong, dominating the Christopher Newport Captains on offense. DePauw put a total of 16 shots on goal and capitalized on two; scored by sophomore Addie Ball and senior Paige Henry. Goalie Maggie Steele, senior, was only forced to make two saves throughout the entire game.

Both teams entered halftime scoreless, but it didn’t take the Tigers long in the second half to put a goal on the scoreboard. The team advanced on a corner called nine minutes into the second half. Ball finished the play off an assist by Henry. After that, it was Henry’s turn to score. She followed with a second goal with 6:30 remaining in the game.

“Today’s game shows what the team is made of and has to look forward to in the upcoming weeks,” Henry said. “This is the best we’ve played. This is all of our hard work through preseason and the first two weeks. Today really showed our full capabilities. Every single person on the team brought it today and really played the best they could.”

Stepping first to each ball resulted in chance after chance for the Tigers to take advantage of and put another game away.  In practice this past week the team focused on creating options on attack, which Head Coach Gina Preston saw done in today’s game.

“We played well together,” Preston said. “When our defense stepped up we had a lot of options moving forward to attack as a team and then took advantage of the opportunities when we had them on our end.”

Even with the win, the Tigers still respect Christopher Newport’s skill.

“They’re a great team,” Preston said. “They attack with speed and really push our defense. They have great defense inside the circle too. We had a hard time getting it through to goal. It was a great game played both ways. We were excited with the finish.”

The Tigers will play again Sunday, Sept. 7, against Centre College at 2:30 p.m. at Reavis Stadium.

Even with Saturday's win, the women will be starting fresh Sunday to face the Centre Colonels.

“This is just the beginning of the season and we need to keep building and getting better from here,” Campbell said. “This is a great building block but we still have things to work on. We’re excited for it to keep progressing.”