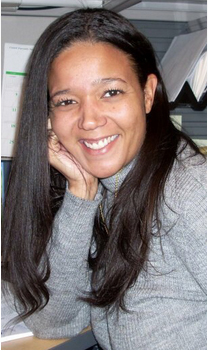 Renee Madison, '95, returns to DePauw this year as senior
advister to the president for diveristy and compliance.
COURTESY OF DEPAUW UNIVERSITY

Renee Madison, class of 1995, will rejoin the DePauw University community next week. She holds an entirely new position as the senior advisor to President Brian Casey for diversity and compliance.

Reflecting back on her time as a student at DePauw, Madison recalled cliques of sports, clubs, greeks and majors in which people sometimes isolated themselves.

“I think that one of the really important things is to break down those silos and learn how to engage with people outside your comfort zone and find that connection with other people,” she said.

Madison is an attorney who worked previously as the associate director of enforcement for the National Collegiate Athletics Association (NCAA).

“Her interest developed I think around the same time that we had been developing a clearer and clearer sense of our need for a couple of different functions: a diversity function and a compliance function at DePauw,” said Christopher Wells, Vice President for Student life. Wells is expected to work closely with Madison once she assumes her position.

While Madison's appointment may seem inspired by impassioned conversations last semester about DePauw's racial divides, the creation of her position is not directly.

“I don’t think it’d be fair to say that it was because of what happened last year, but it would be silly and not constructive to think that we’re not thinking about, listening to and wanting to respond to the concerns that were expressed last year in forming this position,” said Wells.

Sandy Tran, DePauw class of 2014, winner of the Walker Cup and active part of last year's conversations on diversity, was thrilled to hear about Madison's appointment.

"This is definitely a great start to addressing the issues on campus," she said. "It will take the entire DePauw community to create the inclusive, respectful and loving home we all dream and hope for."

The Compliance aspect of Madison's position deals with federal regulations, including her role as DePauw’s Title IX coordinator. Title IX of the Education Amendments of 1972, while originally directed toward gender in athletics, has expanded to deal with sexual assault, sexual misconduct and other gender issues that could arise on campus.

“It’s become about making sure that you have a healthy, constructive learning environment for students regardless of their gender,” said Wells.

The Diversity portion of Madison's role is still developing, as it is a newly created position and Madison is not yet on campus.

“I think it’s going to be important to make sure that there’s an overarching goal and vision,” said Madison, “which once I am on campus and am able to talk to all of the people who are really important in helping create that goal and vision, then I will be able to have a better idea as to what that will look like after 30 or 60 days.”

As an alumna, Madison understands the DePauw environment, though she stressed that she was a student nearly twenty years ago.

“I think it’s really important for me to interact with students,” she said.  “I wouldn’t be able to do my job well if I’m not involved in engaging in conversations with students.”

She hopes to learn the needs of the University and to interact with the student population in order to address and progress diversity at DePauw. Madison wants everyone at DePauw to feel included in her work.

“This position, I think, would be a collaboration with administration, with faculty and with students,” she said. “We need to be able to have conversations with everyone.”

Madison is excited for Marvin’s, the educational environment and opportunities for change.

“I’m really looking forward to making an impact—from what I’ve read in some of the articles from The DePauw, there have been some discussions on campus about campus culture, both in the classroom and outside of the classroom,” she said. “I’m really hoping to help make a difference and impact in improving campus culture.”