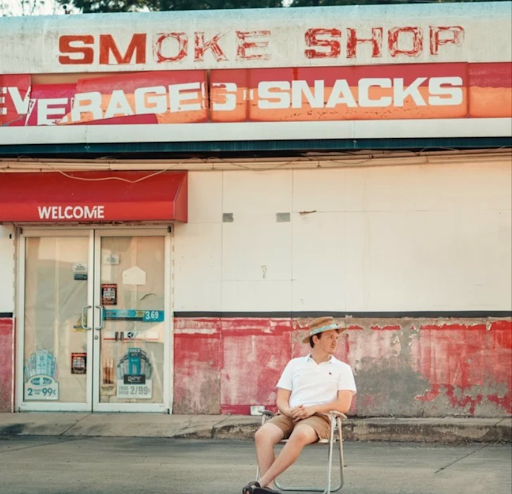 Although this is his first release, he has been playing music for the majority of his life.

“I was seven years old when I bought my first guitar,” Black said. “And then, I started singing, playing the drums, piano, and bass. I got kind of tired of trying to find bandmates, so I started figuring everything out by myself.”

Black said  he first started writing his own music when he was in high school, but he finally wrote the first song  he liked when he was 18.

Growing up, Black was first inspired by AC/DC, The Rolling Stones, The Beatles, and Pink Floyd,Dave Matthews Band, and Wilco. He spent his free time covering music, but soon transitioned to writing his own.

“I love covering stuff. I still do it all the time. But after a while, you’re like, why am I not just playing around with these little ideas I come up with in my head?” Black said.

Black wrote the entire EP in his first year dorm, Hogate, in 2019, then recorded the songs in the winter of his sophomore year in 2021.

He said that the songs came to him during late nights after his friends would leave to study. It was some of his favorite memories of songwriting, because, according to Black, Hogate was “this really kind of crappy place. It was all kind of dirty, but these songs came out of it that I really enjoy.”

It took him about two months to get it all tracked once he began recording. He sat on those tapes for about a year and experimented with mixing until it was finally the way he wanted.

“I couldn’t mix or master very well at the time, so I didn’t put it out yet. I spent some time learning those skills,” he said. “I spent the last six years sort of constructing a home studio and, you know, building it, and doing all the things that go into that. It really turned out and my house is now my little musical playground.”

This inspiration for his lyrics came from the sentimentality of Greencastle and his past life experiences.

“As some of those words just kind of came out and then I kind of filled them with some other words and it just kind of all came together, I was like, ‘Ah, this is all right. I'll put it out,’” Black said.

Black played all of the guitar and bass on the tracks alongside the vocals and background vocals, and some of his friends filled in the rest of the instruments. He said that he considers his EP to be “on the Arizona soft rock side,” which has more emphasis on lyrics, but he typically categorizes it under the umbrella term of rock.

The name of his EP comes from a classic Greencastle landmark shown on his album cover and it does not have any symbolic meaning.

“I found that old smoke shop building in front of Dairy Castle and I was like, we’ll just call it ‘Smoke Shop,’” Black said.

His plans for the future include expanding his EP to a full length album and continuing playing music as much as possible.

His next gig is at the Putnam Country Mural Block Party on September 23, but he is always playing music around Greencastle. Follow Parker Black on Spotify and Instagram, both @parkertblack, to listen to his EP and stay updated on his performances.