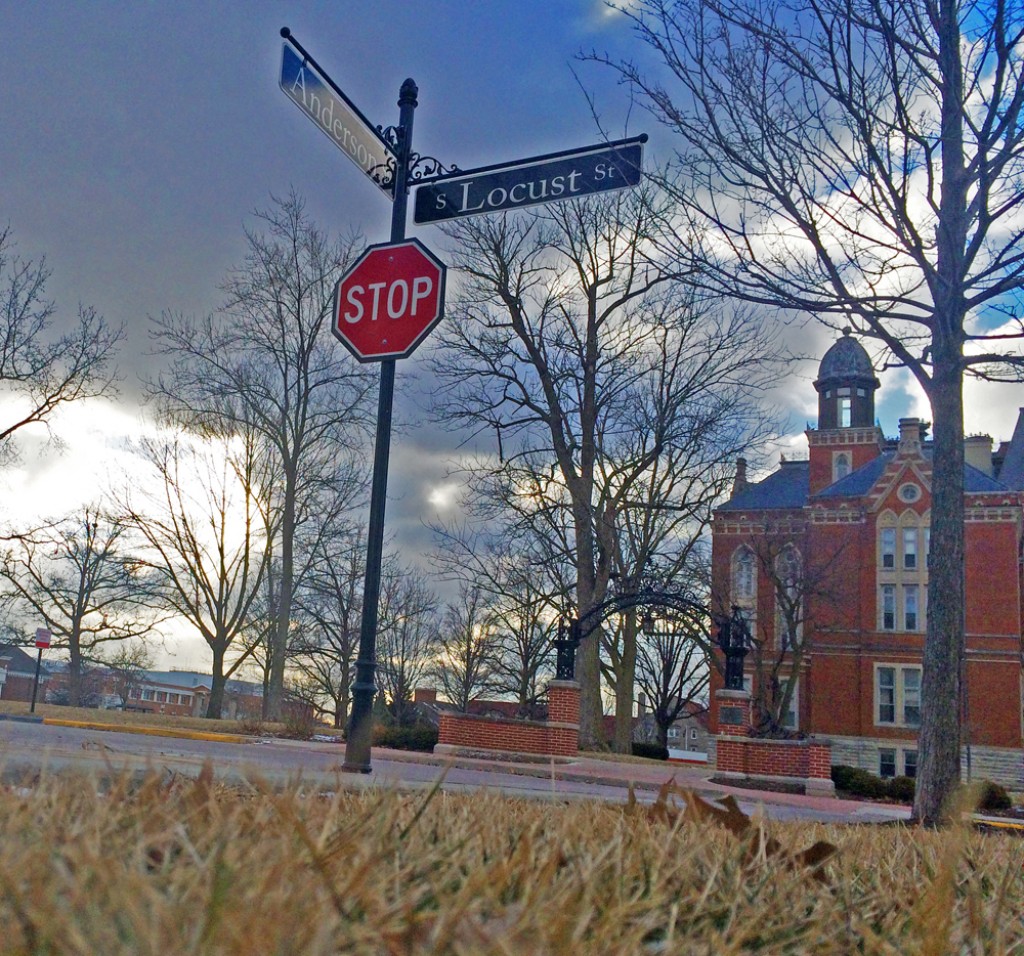 Due to the difficulty of Crossing Anderson and Locusts streets, and a recent car accident on Sunday Feb. 8, DePauw University Student Government (DSG) and Administration has been working with the City of Greencastle to get a three-way stop installed at the intersection in front of East College, although there has been little progress on the side of the City of Greencastle.

“I think it’s hard for people, especially in the city [of Greencastle] to understand how important having a stop sign there is, just because one; I’m sure they’re not going down that street all the time, two; they’re probably not pedestrians there, and three; it’s a small town so how often does a car crash happen?” said Claire Halffield, sophomore DSG Parliamentarian.

Last semester, Halffield, Charlie Douglas and other DSG executive members wrote a white paper about getting a stop sign installed at the Anderson and Locust Street intersection.

“The current progress of the white paper on the stop sign is that it was taken to the administration and they determined it was a city issue. Therefore, the writers of the paper are working to take it to a city council meeting. In addition, the university worked with DSG to put in additional no parking sides next to the arch on Locust Street to increase the ability to see when crossing Locust Street from East College to Anderson Street,” Watson said.

This white paper is a bigger issue than for just DePauw students. The safety of anyone crossing or driving through this intersection has a greater chance of an accident due to the low visibility.

“Originally our white paper was about pedestrian safety and making sure students could walk across the street and not have to worry about a car running them over, but now that there’s been a car crash, it would be even more valuable to have a three-way stop at Anderson and Locust Street just so people are safe no matter what vehicle transportation they’re taking,” Halffield said.

There have been similar problems in the past with student pedestrian safety at the intersection of Jackson and Hanna Street. Now, there is a yield to pedestrian sign that allows for people to cross easier and safer.

“There were problems, from what I’ve heard, trying to get a yield to pedestrian sign put in over by the cemetery, if you’re walking to Blackstock, so it was really hard even to get that just because that’s a truck route, but [the Anderson and Locust street crossing] isn’t a truck route,” Halffield said. “You’re not going to see trucks going down the street, it’s more about the speed that the cars are going, and the stop sign [would be] a reminder for the cars to slow down, take a minute, look both ways to make sure no one is coming, whether it be a car or pedestrian.”

“I think the recent accident will allow for an increase in awareness pertaining to the need for cars to drive slower on Locust Street, particularly when DePauw is in session,” Watson said.

DSG plans to soon send a letter to Mayor Sue Murray’s office inviting the city to revisit the issue of installing a three-way stop at the intersection of Anderson and Locust Street. To view the stop sign white paper online, visit www.depauw.edu/orgs/dsg/updates/ under “White Papers.”