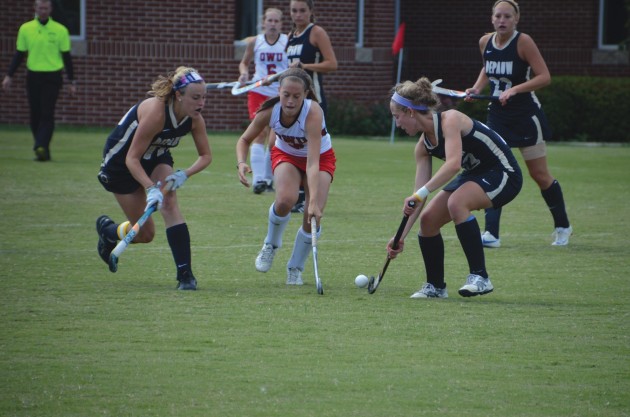 In front of Margaret Ellis was a familiar sight: the entire Ohio Wesleyan University defense standing by the goal, looking to deflect her shot.
After 10 minutes of overtime, her 13th shot was assumed to glance off a Battling Bishop defender’s stick or a shin.
However, this one finally found the goal.
In the Tigers’ 1-0 victory over Ohio Wesleyan on Sunday, the problem was not offensive opportunities, it was getting around the 11 Battling Bishops players who crowded the scoring circle and made it difficult for DePauw (8-1, 6-0 NCAC) to find open shots.
In the end, Ohio Wesleyan’s (3-4, 2-3 NCAC) strategy backfired, as they failed to take a shot in the entire 80 minutes of play at Blackstock West Field.
“We wanted to keep the ball out of our goal cage. That was the only strategy we had,” Ohio Wesleyan head coach Marge Redmond said. “We were pretty successful with that. Our offense was a bit off today.
“We had trouble getting the ball through the midfield. DePauw is a very good team, and they basically shut us down, and we didn’t step up and do the things we can do.”
The Battling Bishops relied on counterattacks to try and catch a frustrated Tigers offense off-guard. However, the visitors committed just three or four players to an attack, as DePauw sprinted back on defense to thwart any threat.
Sophomore goalkeeper Maggie Steele never touched the ball in the entire game, and for the third time of the season, the Tigers didn’t allow one shot on goal.
DePauw outshot Ohio Wesleyan 31-0 and held the advantage on penalty corners, 23-0. It was during one of those corners in the second half where the Tigers thought they had their first goal.
Ellis lifted a shot to the upper left corner of the Battling Bishops’ goal. Sophomore Maggie Campbell lifted her stick to bat the ball straight back into the goal.
As Campbell and the rest of the DePauw team celebrated, one referee called the score off, citing a high-sticking penalty – Campbell’s stick was lifted above her shoulders.
“It was tough for us when they were putting 11 people inside the circle. Even when we were passing and moving the ball around, we didn’t have a lot of space to go forward,” DePauw head coach Gina Wills said. “We did a pretty good job of creating goal-scoring opportunities in our corners, but we just weren’t able to execute.”
In overtime, the teams’ numbers were reduced to seven players on each side. The diminished numbers proved to play in Tigers’ favor, and they won three penalty corners during the first 10 minutes.
On the third penalty corner, Campbell passed the ball to Ellis at the top of the scoring circle, who then laced a shot to the lower left corner of the goal, ending the game and keeping DePauw perfect record in conference play.
The win was the Tigers’ second-straight overtime victory of the season, and during the weekend.
On Saturday, DePauw beat Denison University 1-0 by a Chelsea Cutler goal off of a corner in the 75th minute.
“(The overtime) is frustrating, but the girls did a nice job of taking a deep breath when overtime started, and we were still able to maintain possession on our end,” Wills said.
The Tigers next travel to Kenyon College on Saturday.