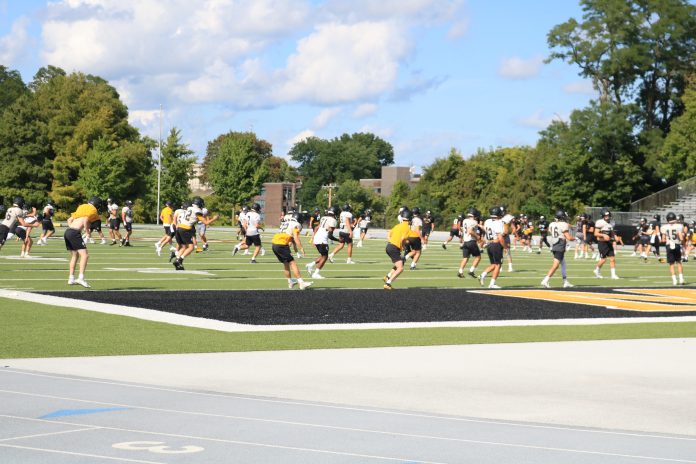 Games will not be played, but individual practicing and conditioning can happen, ACCORDING TO WHOM? . However, there are contingencies, especially considering how spring sports use the fall to prepare. This situation also applies pressure on fall sport coaches regarding how to keep their athletes in shape, spring sport coaches on what preparation looks like, and the athletic department as a whole.

Consequently, many athletes will lose their last year competing.

“When I found out I was really upset, really angry at the whole situation,” senior football player, Jake Kunkel said. “But even though my final season was taken away, the memories and brothers I have from my football experience at DePauw will always be there.”

While some athletes are disappointed, they understand what’s at stake.

“My initial reaction was shock, of course, though in the back of my mind, I kind of prepared myself in case this would happen,” sophomore cross country runner Reagan Hoggatt said.“I was mad too, I'm gonna admit it, I was so ready to make a comeback especially after having to sit out of indoor track and not having an outdoor season. But I think it was a smart move in the long run.” Hoggatt continued, saying “I’d much rather miss out on a season if it meant keeping people more susceptible to COVID safe and lowering the rise and number of infected.”

While Hoggatt understands what’s at stake, she also questions the implications of the announcement to daily life. “Whether running or spread out on a field running drills, more often than not I’ve seen that there tends to be more space between us than being super close,” Hoggatt said. “So I’m curious to see how our school itself is going to react as we will be in closer quarters with going to classes, eating, and sleeping in the same rooms.”

Dual sport athletes face a different dilemma, as Danny Sheehan, sophomore, plays football and baseball. Spring sports haven’t been suspended yet, but Sheehan’s sophomore football season will not happen. “Definitely disappointed [about football] but I honestly think it’s the right decision. It would be very dangerous to have us play fall sports this year,” Sheehan said.

Volleyball player Jessica Levy, sophomore, took a similar stance to Sheehan and Hoggatt.
“Initially, I was pretty shocked considering that we had just received news that our seasons were still going to proceed, and I was pretty angry and resentful because of all the hard work my teammates and I had put in during the off-season,” Levy said.

Levy also understood the importance of the NCAC’s decision, as she also said, “However, after some thought and after the emotion settled, I understood that the school and the conference did their very best to try and make a season happen. No one wanted this and I understand that this decision was made as a last resort for our safety and the safety of DePauw’s community as a whole. Hopefully, we can successfully move our seasons to the spring and play as normally and as safely as possible, but because of the current uncertainty of the pandemic, I think all athletes need to prepare for any situation to unfold in the future.”

“It’s looking like a lot of training will be individual” basketball player Grace Kinsey, ‘22 said. When asked what her mindset will be, she replied, “The biggest thing will be keeping myself safe, and the rest of campus as well. I see this as a fantastic opportunity to start getting ahead on what I need to work on...I think there's going to be a huge breakaway between some teams who have spent this off time, this usual period, really going after their goals.”

Cross country runner Trevor Hoftiezer, ‘22 said, “With the recent announcement of the NCAC suspending athletics, I and many other student athletes are disappointed. Many of us have spent hundreds of hours training since we were sent home during the spring semester, prepping for our seasons. As disappointing as it may be, I trust that DePauw and the NCAC are making the best decisions so that students may safely return to their respective campuses in the fall for in person/mixed classes.” Hofteizer went on to say, “For the seniors, I'm sorry you won't get to have your final season. I will certainly miss your leadership, comradery, and work ethic. For the first years, I'm sad that you won't get to experience the Team DePauw love, hard work, and success. Know that it will be waiting for you next fall.”

The announcement signals an early conclusion to many senior athletes' careers. With that comes a bittersweet end to many relationships, as football player Tyler Meyers ‘23 elaborates, “It’s just tough. We have all been working so hard for the season. Thoughts go out especially for the seniors.”