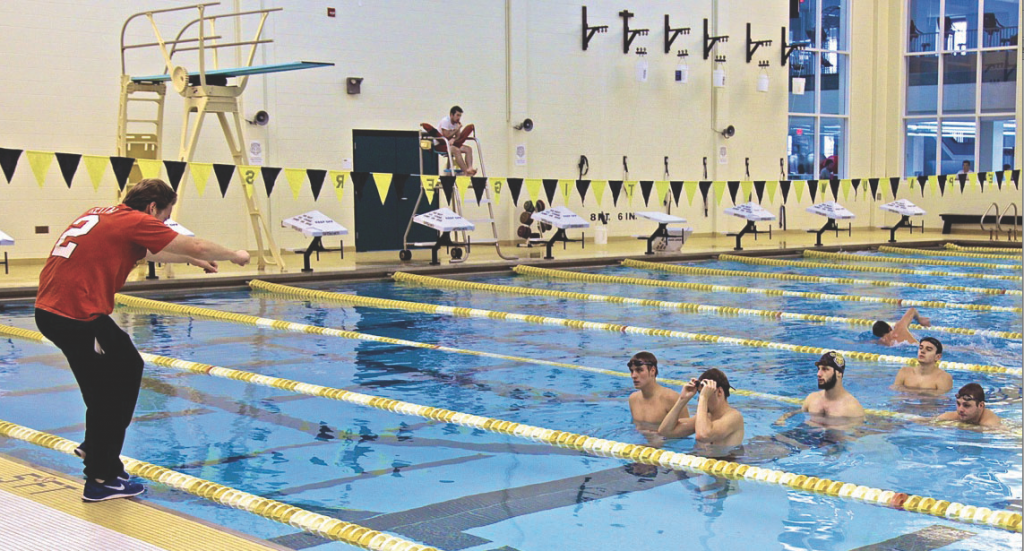 Assistant men's swimming coach Dan Kalupski makes a point
to a group of swimmers at practice. The Tigers will compete in
their first meet on October 18.
SAM CARAVANA / THE DEPAUW

After over a month of two-a-day practicing, both the men’s and women’s swimming and diving teams are ready to start competing.

Both teams have been lifting and swimming since the middle of September in an effort to improve on a commendable 2013-2014 season. Both the men's and women's squads finished 15th at the NCAA national competition last season.

This season looks different for the men’s team which graduated a number of fast seniors including Matt Haeske. Haeske's departure opens a slot on the 800-freestyle relay that placed seventh nationally.  In addition to Haeske, the relay consisted of senior Casey Hooker and juniors Stephen McMurtry and Thomas Grissom. Despite McMurtry swimming in the relay last season, his spot is up for grabs this season.

Despite uncertainty about the 800-freestyle relay, the team has high hopes for the 400-freestyle relay, which placed fourth in the nation and returns all of its members: seniors Casey Hooker and Alex Alfonso, as well as juniors Blake Lehmann and Thomas Grissom.

“That’s going to be a lot of points for us at conference,” Cohen said.

The women’s team is also set for another strong season. They graduated only two seniors last year. The squad returns all members of its 400-freestyle relay, which finished tenth in the nation. The relay team consisted of senior co-captain Emily Weber, juniors Erin Horne and Caroline Bridges and sophomore Kirsten Olson.

In addition to the 800-free relay, Newlon placed ninth nationally in the 500-freestyle and was voted Newcomer of the Year.

Despite returning the majority of their team, the women’s swimming and diving team will still sustain a major loss. Assistant Coach Alyssa Swanson will leave the team Wednesday after accepting a job at the Scott’s Company. The team is currently searching for a replacement, but for the time being the position will be left vacant, leaving head coach Ben Hewitt shorthanded.

With high expectations for their respective seasons, both teams are eagerly waiting to swim competitively again.

“They’re really anxious to swim a meet,” Cohen said about his teams.

Both the men and women open their seasons this weekend at the Indiana Intercollegiate Invitational hosted by Purdue University.